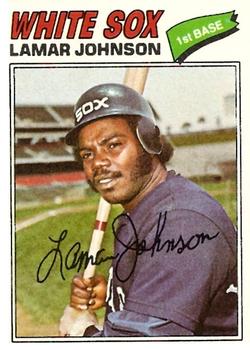 On June 19, 1977, the Chicago White Sox hosted the Oakland A’s for a Father’s Day doubleheader. Those among the crowd of 24,161 who arrived before the first pitch witnessed an unusual sight: A player in uniform walked to the microphone to sing the National Anthem. The player was White Sox first baseman Lamar Johnson, who had dabbled in musical theater in high school and whom a teammate had recommended be given the honor.

Johnson’s voice and his singing were pleasant enough, but what made the day memorable was the first game of the doubleheader that followed. Johnson accounted for all 10 of his team’s total bases, and his contribution was just enough for the White Sox to eke out a win which, coupled with another win in the second game, moved them into first place in the American League West Division.

Before Johnson seized the day, the buzz among White Sox fans had centered on starting knuckleball pitcher Wilbur Wood, who was coming back from injury. In May of the previous season, a line drive off the bat of Ron LeFlore of the Detroit Tigers had shattered his kneecap. Wood sat out the rest of the 1976 season, then struggled early in one start and three relief appearances in 1977. He seemed to turn the corner by pitching five scoreless innings in relief on June 7, and the White Sox gave him the ball for the start on the 19th.

The White Sox desperately needed a healthy Wilbur Wood. They led the American League West in runs scored per game at a robust 5.22, but exceeded everybody except the expansion Seattle Mariners in runs allowed per game at 4.73. The Sox were 33-27 and a game and a half out of first place. Before the game, owner Bill Veeck, with just a touch of showman’s exaggeration, said, “This is the day I find out what kind of a season we’re going to have.”1 — meaning that he would see whether Wood had returned to form.

The Oakland A’s were struggling after winning three straight World Series between 1972 and 1974 and five straight division titles between 1971 and 1975. Owner Charlie Finley had sold or traded most of his best players since the advent of free agency in 1976. Pitcher Vida Blue was the only prominent player remaining from the championship years. The A’s had surprised everybody by starting the season with seven wins in their first eight games, but had since fallen to 28-32 and were at risk of dropping out of the divisional race.

The A’s did, however, have a promising second-year starting pitcher in right-hander Mike Norris, who would take the mound against Wood. Norris came into the game with a 2-1 record and a 3.32 ERA. Norris was primarily a fastball pitcher in 1977; he had not yet added the screwball that would help him finish second in the American League Cy Young Award voting in 1980.2

As the June 19 game began, both Wood and Norris were sharp. Wood allowed only an infield hit through the first two innings, and Norris retired the first five White Sox batters. Then Lamar Johnson stepped to the plate. Johnson, 26 years old and in his second full major-league season, specialized in hitting left-handed pitchers. He might not ordinarily have been playing against the right-hander Norris, but regular first baseman Jim Spencer had gone down after fouling a ball off his foot 10 days earlier. For the time being, Johnson was playing every game. He lined a home run to left field for a 1-0 White Sox lead. It was his fourth home run of the year.

Norris and Wood then resumed their pitchers’ duel, with Wood allowing only another infield hit through the third and fourth innings, and Norris allowing only a harmless walk. In the top of the fifth, Oakland threatened for the first time — not because Wood weakened, but because of leaky White Sox defense. Wayne Gross reached base on an error by second baseman Jorge Orta, Earl Williams singled, and Jim Tyrone reached on a miscue by shortstop Kevin Bell that scored Gross to tie the game.

Rookie Tony Armas bunted for a single to load the bases. Rob Picciolo hit what appeared to be a routine sacrifice fly to center field and Williams crossed the plate for an apparent 2-1 Oakland lead.

Third baseman Eric Soderholm, however, noticed that Williams had left third base too soon, and called for the ball from Wood for an appeal. Umpire Dave Phillips called Williams out for a delayed double play. “He was about six feet away from the base when the ball was caught,” said Soderholm.3

Wood retired Rodney Scott on a popup to end the inning. The game didn’t stay tied for long. Johnson led off the bottom of the fifth with his second home run of the game and the second White Sox hit. Norris retired the next three White Sox in order.

The A’s threatened anew in the top of the sixth, loading the bases with one out. But Earl Williams again killed the rally, this time grounding into a double play. The White Sox held their 2-1 lead.

As a knuckleballer, Wood often pitched prodigious numbers of innings and had 22 complete games as recently as 1974. On this day, with Wood still being stretched out after his injury, manager Bob Lemon chose to bring in his best relief pitcher, Lerrin LaGrow. LaGrow induced Earl Williams to ground into his second double play of the game and struck out pinch-hitter Mitchell Page. The White Sox won 2-1 with Lamar Johnson accounting for all 10 of his team’s total bases, all three hits, both runs scored, and both runs batted in. Wood notched his first win since his injury.

After the game, Johnson discussed both his singing and his slugging. “Bart Johnson (a White Sox pitcher) talked to Bill Veeck’s secretary about my singing the Anthem,” he said. “Hey, if singing means I hit like that, I’ll sing any time they want.”4

Johnson’s fun didn’t end with the first game. Between games the White Sox held their annual “fathers, sons, and daughters” game in honor of Father’s Day, and Johnson got to show off his sons, Lamar Jr. and Brian. The youngsters even revived the uniform shorts that the adult White Sox had mercifully abandoned after three games the previous season.5

The White Sox also won the second game, 5-1, with Johnson getting a hit and scoring a run. They were in first place by percentage points at the end of the day.

The day also marked the final playing appearance in the tempestuous 15-year career of Dick Allen. Allen had played three of his best seasons for the White Sox, including the spectacular 1972 campaign in which he won the American League MVP Award and contended for the Triple Crown until mid-September. But he was playing for Oakland in 1977, and Chicago fans regarded him as the enemy. Allen was booed every time he came to the plate.6 Allen played first base in the first game and struck out as a pinch-hitter in the second game. The next night, owner Finley caught him attempting to leave the park in the middle of a game. Finley suspended Allen, and Allen left the team and never played in another major-league game.

In addition to the sources cited in the Notes, the author consulted the Baseball-Reference.com and Retrosheet.org websites for pertinent material and the box scores noted below:

2 John Hickey, “From Juan Marichal to Mike Norris to Fernandomania,” Inside the Athletics, June 16, 2020, https://si.com/mlb/athletics/news/from-juan-marichal-to-mike-norris-to-fernandomania-the-rise-fall-of-the-screwball.