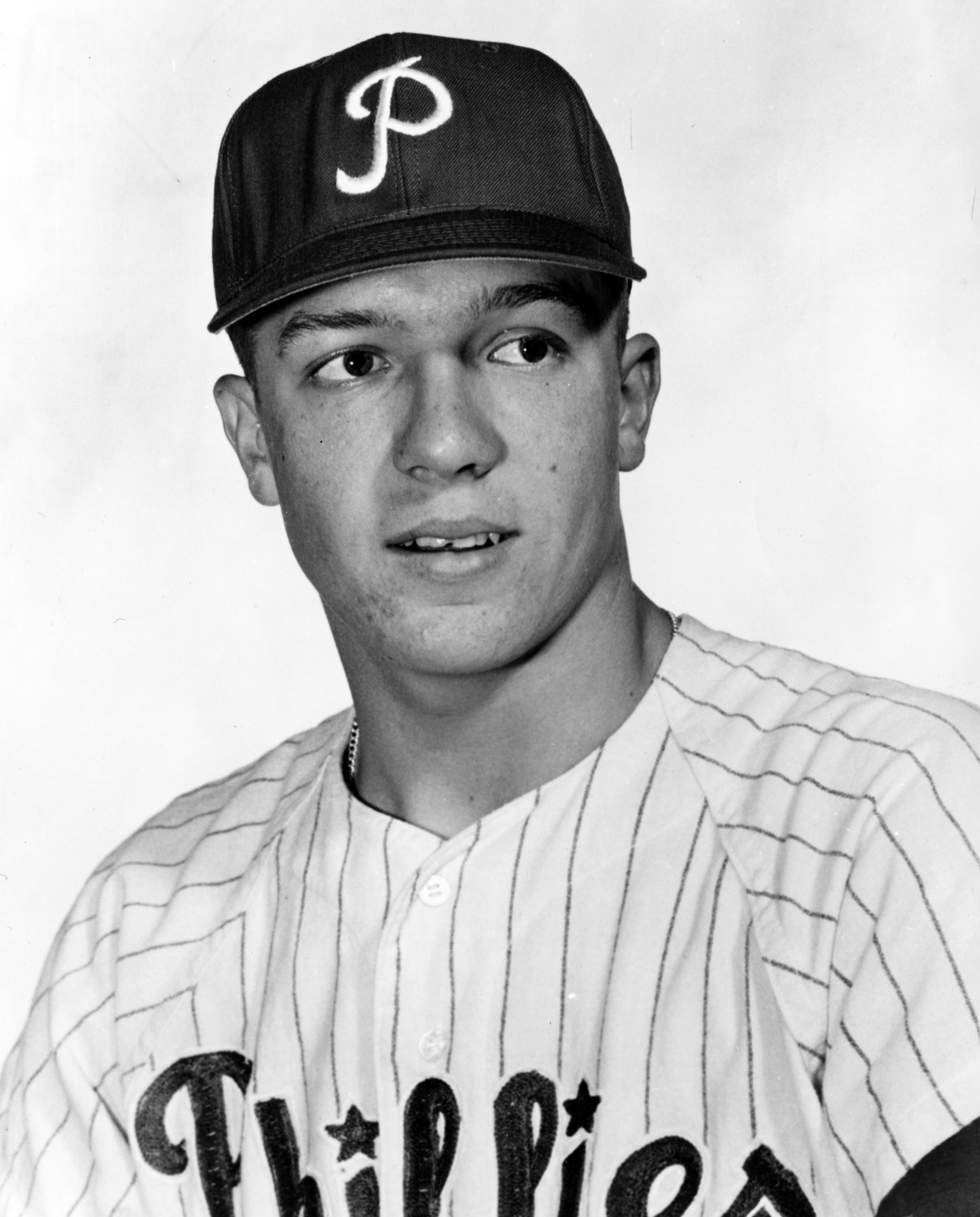 Most Phillies fans have Father’s Day 1964 etched in their hearts and minds. In the first game of a doubleheader against the New York Mets in Shea Stadium, Jim Bunning pitched the seventh perfect game in major-league history and the first in the National League since 1880. Acquired from the Detroit Tigers in the offseason, Bunning was a veteran pitching ace for the first-place Phillies. As expected, the next day’s newspaper coverage focused on Bunning and his historic performance. But the second game of the day, featuring the breakout performance of two rookies, meant just as much to the Phillies in their pennant drive.

Rick Wise and Johnny Briggs were both signed as bonus babies. This meant that both players were required to be on the big-league roster in 1964 or, alternately, subject to a draft. Despite their youth and inexperience, the Phillies had no problem finding opportunities for the outstanding prospects to play. In the afterglow of Bunning’s gem, they both took a big step forward in game two of the doubleheader. On that hot, humid Sunday afternoon in front of 32,026 fans, 18-year-old Wise won his first major-league game and 20-year-old outfielder Briggs hit his first major-league home run.

June 21 marked the Phillies’ third doubleheader in a week, so manager Gene Mauch elected to give Wise his second major-league start in game two. In his first start, on May 21 in San Francisco, the Giants knocked out Wise in the fourth. He surrendered four runs in the Phillies’ 9-4 loss. Now in the New York spotlight, Wise stepped into the pressure cooker after Bunning’s gem. Confident but understandably nervous, he said, “I could hardly concentrate. But in some ways, it was an incentive. It showed me what hard work and desire can do.”1

Frank Lary got the start for the Mets. Like Bunning, he was a former Detroit Tiger, now pitching in the National League. On this Sunday he did not fare as well as his former teammate. The Phillies wasted no time in getting on the scoreboard. Squaring up the third pitch of the game, Briggs drove a ball deep over the center-field wall to give the Phillies the lead. Briggs started because regular center fielder Tony Gonzalez was sidelined with a pulled groin. As the temporary starter, Briggs reached base in each game of the series and played an error-free center field. Asked about Briggs’s performance after the game Mauch said, “Briggs had a fine series.”2 Lary retired the next two batters before issuing a walk to cleanup hitter Dick Allen, a rookie who started every game for the Phillies in 1964. The 22-year-old third baseman was having a marvelous offensive season, which culminated in his winning the NL Rookie of the Year Award. Consecutive singles by Wes Covington, Tony Taylor, and Cookie Rojas plated two more runs. The inning ended with the Phillies up 3-0.

Taking the mound in the bottom of the first, Wise had no problem, easily retiring the three batters he faced. In the second, the Mets broke the consecutive out streak started by Bunning when Jesse Gonder walked with one out. Most fans stayed for the second game, and those on hand celebrated the occasion with cheers and firecrackers.3 A wild pitch by Wise and errors by second baseman Taylor and third baseman Allen followed and the Mets scored their first run without a hit. In the game, the Phillies committed four errors, hit two batters and threw three wild pitches. It seemed that once the tension of the streak of outs was broken, the Phillies experienced a letdown leading to sloppy play.

Lary settled down and retired the Phillies in order in the second, but faltered again in the third. After disposing of feared sluggers Allen and Covington, Lary walked Taylor and hit Rojas with a pitch. Clay Dalrymple plated Taylor with a single up the middle, restoring the Phillies’ three-run lead. In the bottom of the inning, more sloppy play by the Phillies led to the Mets’ second run. Wise walked Lary and Allen booted Jim Hickman’s grounder to third, allowing Lary to advance to second. The error was one of two in the game for Allen and one of a league-leading 41 he made during the season. Joe Christopher followed Hickman with a single up the middle for the Mets’ first hit and second run, both unearned.

The Phillies struck again in the top of the fourth. Another young Philadelphia star, Johnny Callison, drove a Lary pitch deep over the right-field wall for his 10th home run of the year. The 25-year-old right fielder had one of his finest seasons in 1964. Playing all 162 games, he ended the year with a career-best 322 total bases and a second-place finish in the Most Valuable Player Award balloting. Wise held the Mets in check in the bottom half of the inning. After four innings, the Phillies once again held the lead by three runs, 5-2.

Lary’s poor outing ended in the top of the fifth as the Phillies tacked on three more runs. Covington’s leadoff double ended Lary’s day; Mets manager Casey Stengel summoned Tom Sturdivant as his replacement but Sturdivant fared no better. Pinch-runner Bobby Wine scored on Taylor’s double to right. A passed ball, a hit batter, a wild pitch and sacrifice flies by Dalrymple and Wise stretched the lead to 8-2 and finished Sturdivant’s day.

With a six-run lead, Wise pitched into the seventh, holding the Mets in check. When Chris Cannizzaro walked to lead off the seventh, Mauch decided that Wise’s day was finished. After the game, Wise agreed with his manager. “I hadn’t pitched six innings since Bakersfield,” he said.4 “I guess I got a little tired and I was really conscious of every hitter in that lineup.”5 Mauch said, “I was well pleased with the way Wise conducted himself. We wanted five or six good innings and he gave them to us. He threw 101 pitches, which is a lot for a guy who hasn’t been throwing a lot.”6 Johnny Klippstein pitched the final three innings for his first save of the season.

Surrendering three hits, three walks, and two unearned runs in six innings, Wise earned the first victory of his young career. He started six more games in 1964 and ended the season with a 5-3 record. The doubleheader sweep propelled the Phillies to a two-game lead in the National League. But summer turned to fall and the Phillies collapsed down the stretch, losing 10 of their last 12 games to fall short of the pennant by one game. Wise played for five teams during his 18-year career, retiring after the 1982 season with 188 wins.

In addition to the sources cited in the Notes, the author relied on Baseball Reference and Retrosheet.

4 After signing his contract in June 1963, Wise pitched the rest of the season for minor-league Bakersfield.