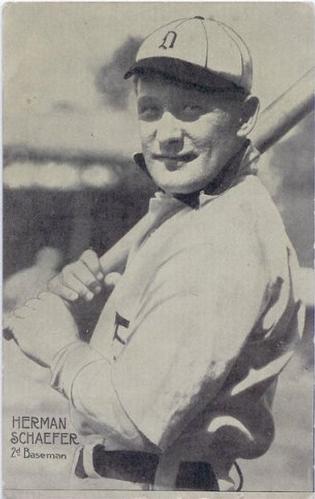 “When the legend becomes fact, print the legend.” So said the reporter at the end of the 1962 movie The Man Who Shot Liberty Valance.1 Upon hearing a popular politician confess that he was not the real shooter, the journalist ignored the fact to preserve the lawmaker’s legend.

Thirty years earlier, baseball writers at the 1932 World Series advanced the legacy of a baseball legend. Babe Ruth may or may not have “called his shot” before hitting a home run in Game Three of that Series. Not surprisingly, the scribes of the times sensed a sensational story  ̶  Ruth points, Charlie Root delivers, Ruth homers. Despite some contrary views, papers printed the legend. It had to be true, it was The Babe. Could a lesser ballplayer earn such repute?

It seems one such soul, William Herman “Germany” Schaefer, ought to be in contention. Though it may have been as apocryphal as some characterize the Ruth story, an eyewitness attested to Schaefer’s verbally calling a shot to the ballpark crowd.2 The fact that Ruth hit 714 career home runs to Schaefer’s nine should not diminish Germany’s stunt. In fact, it enhances it; his “shot” cleared the outfield wall, unlike the inside-the-park homers he usually legged out.

It occurred on Sunday, June 24, 1906. The Detroit Tigers were visiting the Chicago White Sox at South Side Park III. Back on May 26, Schaefer had dislocated his right thumb in a game against the New York Highlanders.3 For a month, the Tigers relegated him to roaming the coaching lines displaying his antics. His hiatus prompted derision by some who mocked his “bum thumb”4 and labeled him “Herman the Cripple.”5 He clowned with fans on the sidelines until June 22, when he failed as a pinch-hitter. Two days later, returning to the coaching box, he witnessed 8⅔ innings of an otherwise forgettable game that led up to his heroics.

After White Sox left-hander Doc “Gunner” White held the Tigers scoreless, the home team struck early, taking a 1-0 lead in the bottom of the first inning. Ed Hahn led off with a single. Player-manager Fielder Jones tried to bunt the next pitch. His failed attempt drew the infield in, looking for another bunt. The move carved space for Jones to loft a soft single to left. Frank “Issy” Isbell sacrificed both runners up a base. Hahn then opened the scoring, coming home on a sacrifice fly by George Davis.6

For the next four innings, both White and Tigers starter Red Donahue tossed shutout ball. Along the way each pitched through some minor trouble, but prevailed. In the bottom of the fourth, Donahue retired Jiggs Donahue to open the frame. John O’Neil then beat out an infield hit when first baseman Chris Lindsay fed a weak toss to pitcher Donahue covering first base. O’Neil stole second. Billy Sullivan fouled out. Then Lee Tannehill stirred some chaos. Tannehill tapped a dribbler up the first-base line. Again, Lindsay and Donahue miscommunicated trying to cover first base. Lindsay’s high feed pulled the pitcher off the bag. Meanwhile, O’Neill tried to sneak home during the mix-up. A flustered Donahue rushed a high throw to catcher Fred Payne. Payne leaped to snare the errant toss and landed with enough time to block O’Neill’s path, get the out, and end the inning.7

In the fifth inning, White evaded Detroit’s first threat. He opened the inning by retiring Bobby Lowe, playing for the injured Schaefer, and Charley O’Leary. Payne then singled to left and hustled to second when left fielder Hahn mishandled the ball. Jiggs Donahue then sliced a single to center field, but Fielder Jones’s strong throw to Sullivan at the plate froze Payne at third. After walking Davy Jones, White ended the threat by striking out Lindsay.8

But the Tigers knotted the score at 1-1 in the sixth inning without getting the ball out of the infield. White Sox shortstop Davis booted a hard grounder by Sam Crawford to open the inning. Ty Cobb sacrificed Crawford to second, but second baseman Isbell dropped White’s toss while covering first. Crawford took third base while Cobb was safe at first. After Bill Coughlin popped out to first baseman Donahue, the Sox played the infield back for a double play. Lowe shrewdly pushed a soft grounder toward Isbell. It resembled a pseudo-squeeze play that scored Crawford as Isbell retired Lowe at first base.9

After a scoreless seventh, Chicago reclaimed the lead in the bottom of the eighth. Fielder Jones looped a soft single over second baseman Lowe’s glove into right field. Isbell’s second sacrifice moved Jones into scoring position. Davis then laced a line-drive single to center, scoring Jones and putting the White Sox ahead, 2-1. Davy Jones narrowly missed getting Jones at the plate with a strong but off-balance throw. Meanwhile, Davis took second on the heave. Jiggs Donahue’s groundout moved Davis to third but he remained stranded as O’Neill popped out.10

These 1906 White Sox justly earned the nickname the Hitless Wonders.11 Often their great pitching offset their poor hitting by holding on to slim leads; this time White took a one-run edge to the ninth inning. He first retired Lowe but yielded a single to O’Leary. After Payne made the second out, the crowd of 12,000 began to leave. Even some of the Tigers headed off to the team bus.12 But with Donahue, the pitcher, due to bat as Detroit’s last hope, manager Bill Armour called out to Schaefer, still manning the third-base coaching box, “How would you like to go up there and pinch-hit?”13

Schaefer, a Chicago native, always attracted hometown friends when he visited the city’s South Side to play the White Sox. As he coached third, they and other fans rode him throughout the games, much of it good naturedly.14 He accepted Armour’s offer as an opportunity to show off for his friends and the locals. As the umpire bellowed the change through his megaphone,15 the announcement brought the jeers to their loudest. The heightened attention inspired Schaefer to amplify his antics.

After trading the coaching box for the batter’s box, Schaefer returned slowly to the bench to change bats before returning to hit.16 Many sources paraphrase his verbiage to the crowd at this point, each in its own way. The most famous is the eyewitness account by Tigers teammate Davy Jones, shared with Lawrence Ritter in his seminal book of Deadball Era interviews, The Glory of Their Times. Jones recalled Schaefer’s proclamation, “Ladies and gentlemen, you are now looking at Herman Schaefer, better known as Herman the Great, acknowledged by one and all to be the greatest pinch-hitter in the world. I am now going to hit the ball into the left field bleachers. Thank you.”17

From the mound, White listened to Schaefer’s bluster, smirked, and took Payne’s sign. But just as he had proclaimed, Schaefer lifted the first pitch well over the left-field fence, just inside the foul pole. Some writers called the blast the longest to date at the South Side ballpark.18

Details of Schaefer’s clowning horseplay only came to light years later. As one account described it: “He bolted for first base at warp speed, dove in head first and jumped to his feet. ‘Schaefer leads at the quarter!’ he yelled. Then he took off for second, sliding in again. ‘It’s Schaefer at the half!’ he said. After another head-first slide into third base, he yelled, ‘Schaefer leads into the home stretch!’ After diving across home plate, he leaped to his feet and yelled, ‘Schaefer wins by a nose!’”19 Apparently, Schaefer had even more to say. After he dusted himself off, another version offered his ending remarks. “Ladeez and gentlemen, this concludes the great batting exhibition for this afternoon. Mr. Germany Schaefer, the world’s greatest hitter, thanks you, each and every one, for your kind attention.”20

The home run, which also scored the all-but-forgotten O’Leary from first base to give the Tigers a sudden 3-2 lead, stunned the exiting crowd. Many darted back to their seats, hoping for a White Sox comeback. It was not to be. Left-hander Ed Siever replaced Red Donahue to start the ninth. Sullivan greeted him with a single. Tannehill failed to bunt Sullivan along for the first out. George Rohe batted for White and rapped a gap shot to left-center that looked as though it could tie the score, but Cobb made a running catch for the second out. Hahn, Chicago’s last chance, ended the brief rally and the game by hitting a routine grounder to second.21

Schaefer’s prediction shares some mystery with Ruth’s widely reported called shot, but they differ in two ways. First, Ruth reportedly pointed while Schaefer made a verbal call. Second, the flamboyant Schaefer liked to announce his hits more frequently. Two eyewitnesses described other “called shots” during Schaefer’s 15-year major-league career. Bill Wambsganss quoted Schaefer as telling the crowd, “Ladies and gentlemen, the great Germany Schaefer will here and now hit the first ball pitched for a sharp single to the left.”22 He then made good on his prediction. Cobb also recalled Schaefer promising a double to the fans: “Ladies and gentlemen, I wish to announce that Germany Schaefer is about to make a two-base hit into right field.”23 After the ensuing two-bagger, he bowed to the applause.

These good-natured escapades, enhanced by the boasting and gloating that only Schaefer, “the born troubadour of the game,”24 could pull off didn’t make him a baseball legend, but got him in print.

In addition to the sources in the Notes, the author consulted Baseball-Reference.com and Retrosheet.org for the box scores noted below.

The Newspapers.com website provided most of the newspaper sources cited in the Notes for play-by-play information.

2 Lawrence Ritter. The Glory of Their Times (New York: Macmillan Company, 1966), 35-36. This is the story as told to Ritter by Schaefer’s teammate Davy Jones. No newspaper account indicated any such quote by Schaefer. But his antics as he rounded the bases suggest some form of surprise and delight.

3 “Schaefer Out with Dislocated Finger,” Detroit Free Press, May 27, 1906: 17. This injury is what relegated Schaefer to coaching the bases.

4 “Timeliest Hit of Baseball Season: Schaefer, Called from Bench, Wins for Detroit After Two Out in Ninth,” Chicago Tribune, June 25, 1906: 8.

7 “Timeliest Hit of Baseball Season.” (From the sidebar of this article titled “Notes of the White Sox Game.”)

11 Kori Rumore, “The All-Chicago World Series: How the ‘Hitless Wonders’ Pulled Off the Upset as the Spuds (Cubs) and the White Stockings (White Sox) Reached the Fall Classic In 1906,” Chicago Tribune,  October 1, 2020. https://www.msn.com/en-us/sports/mlb/the-all-chicago-world-series-how-the-hitless-wonders-pulled-off-the-upset-as-the-spuds-cubs-and-the-white-stockings-white-sox-reached-the-fall-classic-in-1906/ar-BB19BSE1.