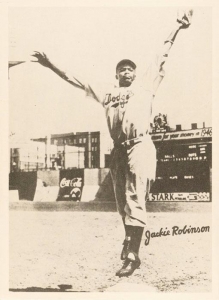 The Dodgers hosted the Pittsburgh Pirates for a Thursday afternoon doubleheader at Ebbets Field, with the Pirates only one game behind the Boston Braves in the National League standings. They’d been in third place for most of the season, but had tied for first for one day, June 16. The second game was a makeup for a rainout on the 22nd. The Dodgers were in sixth place, 7½ games back. They hadn’t seen the first division since May 15. Two right-handers opposed each other as starting pitchers: Harry Taylor for Brooklyn and Bob Chesnes for Pittsburgh. Taylor had been 10-5 in 1947, his official rookie year.1 Chesnes, a rookie, was undefeated and riding a three-game win streak.2

After five innings the Pirates held a 2-0 lead and Taylor was out of the game, replaced by pinch-hitter Marv Rackley in the bottom of the fifth. The runs had come on a third-inning single by third baseman Frankie Gustine and a fifth-inning triple by center fielder Johnny Hopp. He drove in Chesnes, who had walked.

Left-hander Paul Minner threw three scoreless innings for Leo Durocher’s Dodgers.3 After seven innings, the score remained 2-0. But Brooklyn tied it in the bottom of the eighth. The two runs scored on what the Pittsburgh Press characterized as “one hit and some shoddy fielding.”4 Chesnes walked pinch-hitter Bruce Edwards and second baseman Billy Cox, with groundout in between.5 First baseman Jackie Robinson singled to shallow left, loading the bases. (The Press put “single” in quotation marks; the ball had tipped off Hopp’s glove.)6 Carl Furillo lifted a fly ball to his Pirates counterpart in center field. Edwards tagged up and scored – and so did Cox, when second baseman Danny Murtaugh committed an error. Chesnes intentionally walked Pee Wee Reese, and got Gene Hermanski to ground out and end the inning.

In the ninth, reliever Willie Ramsdell set down the Pirates in order.

Chesnes walked the leadoff batter in the bottom of the ninth, catcher Gil Hodges.7 Tommy Brown, who had come into the game to play third base, sacrificed Hodges to second. Pirates manager Billy Meyer turned to his bullpen and summoned Mel Queen. Preston Ward pinch-hit for Ramsdell, and Queen walked him intentionally, setting up a potential double play. Then he got Dick Whitman to foul out to third base. But he walked Cox on four pitches, loading the bases and bringing up Robinson, the Rookie of the Year in 1947.

Robinson watched two pitches go by, a strike and then a ball. He swung at the third pitch and  hit a grand slam to win the game, “a drive that went deep into the left-field stands.”8 The Times added, “The customers went a bit off their trolleys when they saw the ball going into the stands, and Jackie wasn’t unhappy about it, either. ‘It’s the first time in my life that I ever hit a grand-slam homer anywhere.’”9

It was Robinson’s third home run of the season. With four runs batted in, he now had 27.

As in the eighth inning, the Dodgers’ runs all scored on one base hit.  Vince Johnson of the Pittsburgh Post-Gazette grumbled a bit about the grand slam: “A single would have done just as well,” Tell that to the 24,745 fans from Flatbush.10

Ramsdell, of course, got the win. Chesnes bore the defeat. The time of game was 2:49.

The Bums saw their team sweep the Pirates. And they saw more hitting from Robinson in the second game.

The Associated Press game story declared, “Jackie Robinson went on a batting rampage today, banging out seven hits including six in a row.”11 He had two doubles and two singles in the second game, called on account of darkness after 7½ innings; the Dodgers outscored the Pirates, 8-6, and leapfrogged the Phillies into fifth place. Robinson was 4-for-4, was the lead runner in a first-inning double steal after singling Arky Vaughan home with the first run of the game and moving to second when Furillo was hit by a pitch. Robinson scored three runs, and drove in a pair. The late-June steal was his first stolen base of the year. He’d reported to spring training 25 pounds overweight.12

In the doubleheader, Robinson was 7-for-9 with six RBIs and four runs scored. The “ebony clouter” boosted his batting average from .280 to .306.13

Of Robinson’s 137 career home runs, nine were hit in the ninth inning and six were hit in extra innings. Fifty were hit with two outs. Seventy-seven of them were hit at Ebbets Field. Jackie Robinson hit only one other grand slam in his career. It came precisely two years later – on June 24, 1950. It was also hit late in an Ebbets Field game, against the same Pittsburgh Pirates team, this time off Vic Lombardi. The Dodgers won that game, 21-12.

In addition to the sources cited in the Notes, the author consulted Baseball-Reference.com and Retrosheet.org. Thanks to Gregory Wolf for assistance.

5 Cox had started the game playing third base, but moved to second in the top of the eighth.

6 Biederman. The Post-Gazette’s Vince Johnson, though, acknowledged that Hopp had only gotten to the ball “after a hard run.” Vince Johnson, “Robinson’s Batting Big Factor in Bums’ Double Triumph,” Pittsburgh Post-Gazette, June 25, 1948: 20.

10 The New York Times reported attendance of 28,835. The Post-Gazette had the lower figure. The Brooklyn Daily Eagle counted 10 more attendees than the Times: 28,825.