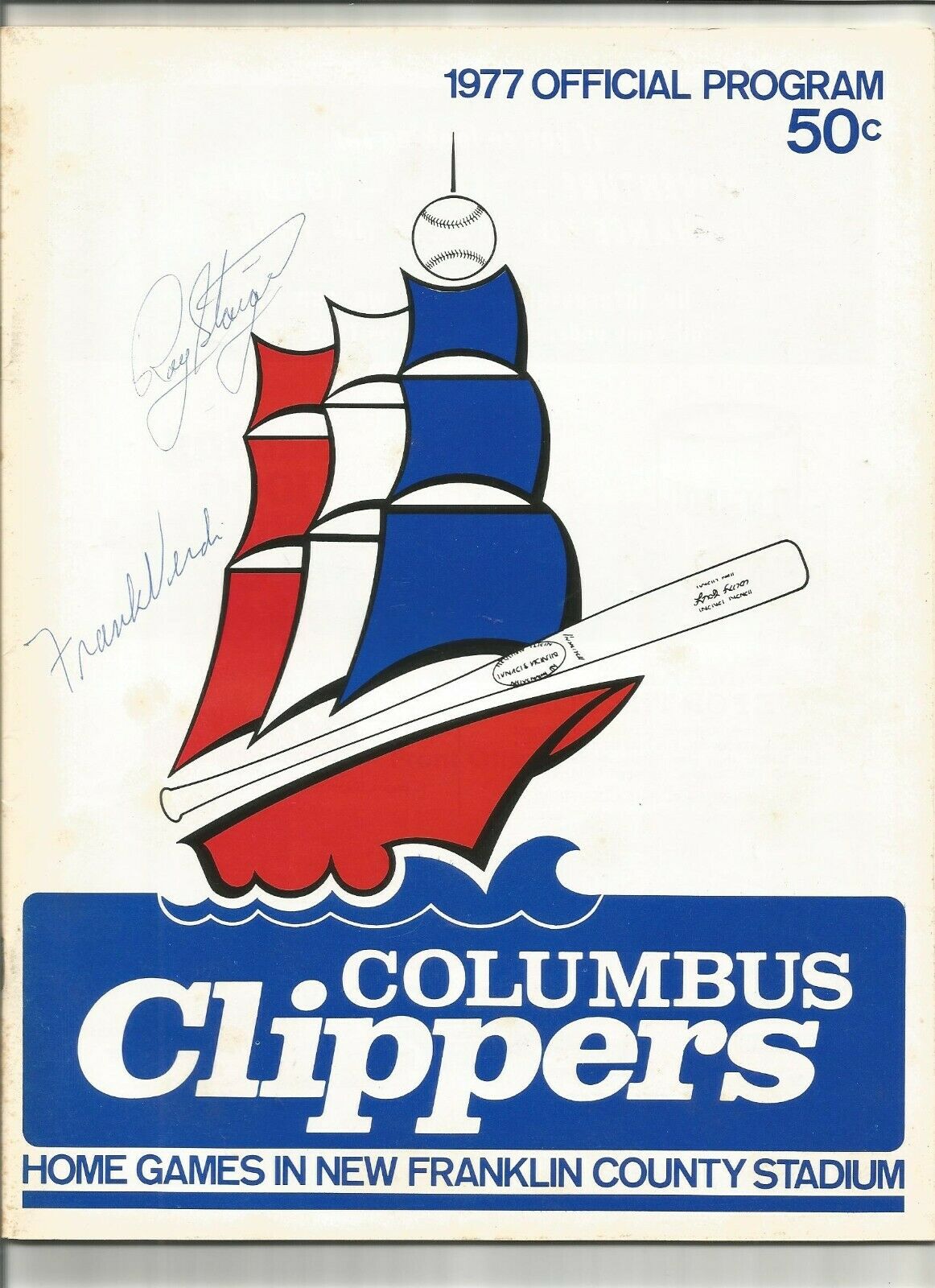 In 1877, the Columbus (Ohio) Buckeyes joined with six other teams to form the International Association, as a rival to the National League. The Buckeyes played more games, 20, than any other IA team, but managed only a 9-11 record. Two other professional leagues operated in 1877 – the League Alliance and the New England Association – but they lasted only a single season.

Even though the term “minor league” was not used at the time, in hindsight these leagues and teams are now recognized as such, and 1877 is regarded as the first minor-league season.

Red Bird Stadium was built in 1931, and served the Columbus franchise through the 1970 season. By that time, the ballpark was in need of major repairs, but IRS regulations prohibited the team, as a nonprofit organization, from using profits to make the improvements. Consequently, the team relocated to Charleston, West Virginia, in 1971. The ballpark sat unused until the Franklin County government purchased it in the mid-1970s and made the needed repairs and other major upgrades, renaming the park Franklin County Stadium. As a result, the Pirates moved their Triple-A team from Charleston back to the Ohio capital for the 1977 season, taking the new name Columbus Clippers.2

To help celebrate the 100th anniversary of minor-league baseball, SABR chose Columbus as the site of its 1977 convention.

SABR 7, held at the Columbus Holiday Inn Downtown June 24-26, was attended by 74 SABR members. It was the group’s largest-attended convention to date, and marked the first time the convention was held in a minor-league city.

Future SABR President Kit Crissey organized a get-together of 28 former major- and minor-league players to be special guests for the weekend. Their names will be listed here for posterity, since this list has never before been published. The years shown are the years that each player was active in professional baseball, in either the majors or minors, as a tribute to the 100th anniversary of minor-league baseball.

All told, the careers of these SABR guests spanned the years from 1923, when Walt Huntzinger was a member of the National League champion New York Giants, through 1995, when Frank Verdi closed out his 22-season minor-league managerial career. Twenty-six of the 28 guests had major-league experience, the exceptions being Eddie Funk and George Sisler Jr. Eddie had pitched in the low minors before World War II and then became an important hurler for the 7th Army Air Force Flyers, based at Hickam Field, Oahu Island, Hawaii, during the war. That team boasted such players as Joe DiMaggio, Joe Gordon, Jerry Priddy, and Ferris Fain. George Sisler Jr., son of Hall of Famer George Sisler, followed a four-year minor-league career with many years as a minor-league executive, including 11 years as president of the International League. He was general manager of the Columbus Clippers from 1977 through 1989.

Did these players have a lot of stories to tell? Yes, they did, and they told them very well, during the luncheon and Saturday afternoon convention, before moving to Franklin County Stadium to continue the festivities. For the first and only time ever, convention-goers were treated to a SABR-sponsored old timers’ game, as well as a regularly scheduled professional contest.

Details of the old timers’ game are lacking. They were divided into two teams, one of players who had been members of National League teams, and the other of American League alumni. The umpires for the game were all SABR conventioneers – Tom Zamorski behind the plate, Troy Soos at first base, and Al Payson at third. Evidently, there was no official scorer for this game, and we have been unable to find any SABR member who even attempted to keep a scorecard. We don’t remember for sure who started on the mound for the National League team, but it may well have been local police Sergeant Dick Hoover, who, in the last of his two big-league appearances with the Braves, surrendered a home run to Hoyt Wilhelm, in the knuckler’s first major-league at-bat. Fifty-eight-year-old Eddie Funk started for the American League team; he had played in the Philadelphia Athletics’ farm system.

It is remembered that Jon Warden, a reliever on the 1968 Tigers and the only eligible member of either team who did not get into a game in that year’s World Series, manned one of the outfield positions for the American League club. Both of the current managers for the regularly scheduled minor-league game, Johnny Lipon of the hometown Columbus Clippers and Frank Verdi of the Tidewater Tides, made appearances in the game. Home plate umpire Tom Zamorski remembered calling Verdi out on strikes, with the Tides skipper throwing the bat away in disgust!

The Columbus Dispatch immortalized the game in the next day’s edition with an action photo captioned “Old Timers Play at Stadium – Two teams of ‘Old Timers’ squared off before the International League baseball game between the Columbus Clippers and Tidewater Tides Saturday night. Former Columbus and Pittsburgh Pirates pitcher Frank Bork, of 725 Fairway Blvd. dives into home for a run as catcher Danny Kravitz, a former Pittsburgh Pirates and Kansas City A’s player awaits the throw.” That may have been the first – and last – time that a player’s home address was ever included in a game description!3

Once the excitement of the old timers’ game began to wear down, and the younger fellows finished their warmups, the announced crowd of 5,038 settled in for the night’s main attraction – Columbus vs. Tidewater. Tidewater, representing Norfolk, Virginia, was the Triple-A farm team of the New York Mets, and brought a 31-32 record into the game, good for fifth place in the eight-team league. The Columbus Clippers, farmhands of the Pittsburgh Pirates, were firmly in last place, with a 23-42 mark. The Clippers had won only two of nine previous contests against Tidewater so far in 1977, and sent Bob Johnson to the mound, facing the Tides’ Paul Siebert. Both pitchers were trying to make good impressions, having just recently joined their respective teams. Johnson had been released two weeks earlier by the Atlanta Braves, and Siebert had been traded 10 days previously, along with Bobby Valentine, by the San Diego Padres to the Mets in exchange for Dave Kingman.

The Tides jumped off to a 1-0 lead on first baseman Ed Kurpiel’s two-out home run, his eighth of the season, in the first inning. They added single runs in the fourth on Rich Miller’s double and a two-out single by shortstop Leo Foster, and in the fifth on a single and stolen base by second baseman Ken Perry, followed by Roy Staiger’s line-drive single, to make it 3-0.

Siebert was hit hard, giving up five hits including a double by Bob Oliver, through the Clippers’ first four innings, but hadn’t yet given up a run. His luck changed in the fifth, however. Outfielder-first-baseman Ron Mitchell, playing his ninth season in the Pirates system, pinch-hit for hurler Johnson and delivered a single past third. He moved to second on Mike Edwards’ second single of the game, advanced to third on Gary Hargis’s fly out to center field, and came home on a sacrifice fly by right-fielder Mike Easler. Edwards then got his 32nd stolen base of the season, and scored on a single by cleanup hitter Ken Macha, bringing the score to 3-2.

The next batter, Bob Oliver, launched a 3-and-2 pitch over the left-field fence for his third hit of the game, putting the Clippers up, 4-3. Columbus third baseman Dale Berra followed with a long drive to almost the same spot as Oliver’s blast, but Tidewater left fielder Rich Miller reached above the fence to snag the would-be homer.

Reliever Jim Sadowski took over on the mound for Columbus in the top of the sixth, allowing a one-out triple off the center-field fence by Leo Foster and a pinch-hit sacrifice fly by Randy Trapp, to tie the score at 4-4.

Ruben Cruz replaced Paul Siebert for the Tides to start the bottom of the sixth, retiring the side in order. In the seventh, however, Mike Edwards led off with his third homer of the season, putting the Clippers back on top, 5-4.

Sadowski breezed through the seventh and eighth innings before giving up a one-out double in the ninth to Tides center fielder Dan Norman and giving way to Fred Scherman. Scherman, who had been an effective reliever in stints with the Tigers, Astros, and Expos, closed out the game to preserve the win for Jim Sadowski.

That Sadowski and Siebert got to work on Old Timers night was appropriate, as they both grew up listening to stories of the good old days in their own families. Sadowski’s three uncles – Ed, Ted, and Bob – all played in the majors and Siebert’s dad, Dick, was a big-league first baseman-outfielder for 11 seasons, after which he coached the University of Minnesota baseball team for 31 years.

Every player who appeared in this game ended his career with at least some major-league service except Ruben Cruz, Ed Kurpiel, Rich Miller, Ken Perry, and Randy Trapp of the Tides and Ron Mitchell of the Clippers. Of the available players who did not participate in this game, the one who went on to the longest career in the big leagues was Tides catcher Ned Yost. At the 1977 Winter Meetings, Yost was selected by the Milwaukee Brewers in the Rule 5 draft from the New York Mets and went on to a 33-year career as a major-league player, coach, and manager. In addition to the sources listed in the Notes, the author consulted the Baseball-Reference.com and Retrosheet.org websites. The author wishes to thank Kit Crissey and Rick Huhn for their memories and assistance on this project.