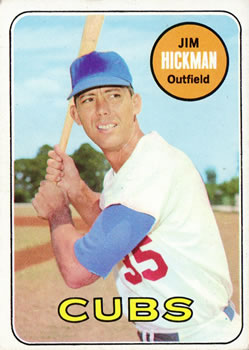 The Chicago Cubs “maintained … their strange mastery,” gushed sportswriter Thomas Rogers of the New York Times, as the North Siders completed a four-game sweep of the Pittsburgh Pirates at Wrigley Field with a 7-5 win in 10 innings on June 26, 1969.1 The Cubs scored all of their runs by blasting four home runs, including a game-winning walk-off two-run round-tripper by Jim Hickman.

For manager Leo Durocher and his first-place Cubs (46-25), a sweep at home was exactly what the doctor had ordered. After extending their lead over the surprising New York Mets in the NL East to a season-high nine games on June 15, the Cubs were swept by the Pirates in a four-game series at Forbes Field in Pittsburgh, with all four games decided by one run.

Luckily for the North Siders, the Pirates entered the rematch riding a nine-game losing streak at Wrigley Field since 1968. By the time the series finale rolled around on Thursday afternoon, the streak had been extended to 12 games, following two one-run Cub victories and Fergie Jenkins’s two-hit, 10 strikeout, complete-game performance on June 25.2

As for manager Larry Shepard and his third-place Pirates (36-35), losing at the Friendly Confines for the 13th straight time seemed unlikely. Unlike the Cubs, the Pirates were heating up prior to this series. They had won seven of their previous 10 games before heading to Chicago. For a team that had been stuck in third place for almost three weeks behind the soaring Mets and Cubs, continuing this positive trend was vital.

On the rubber for the Cubs was four-year veteran right-hander Dick Selma, acquired from the San Diego Padres two months earlier. He entered the game with a 7-3 record and a 3.57 ERA with 57 strikeouts in 58 innings.

For the Pirates, rookie Dock Ellis took the mound in his first full big-league season. Appearing in 26 games for Pittsburgh in 1968, first as a reliever but soon earning his spot in the starting rotation, Ellis posted a smooth 2.50 ERA. He had struggled thus far in ’69 (4-7, 3.90 ERA) going into the Wrigley matinee, but he was coming off the best game of his career to date – a six-hit shutout with 10 punchouts over the Phillies.

Even with a roaring Ladies Day crowd of 40,3443 on the sunny Thursday afternoon, “there didn’t seem to be a Buc follower within 100 miles of Wrigley Field,” reported the Pittsburgh Post-Gazette.4 Despite the hitter-friendly 28 MPH winds out to left field that could “convert even a pop fly into a four-base drive,” wrote the Chicago Tribune,5 it seemed that by the time the series finale came around, the Bucs had been deflated.

For the Cubs, breaking out the brooms was not a surefire outcome, especially after the Pirates’ first inning. Matty Alou, who entered with a league-leading .365 batting average, led the game off with a base hit to center field. Johnny Jeter followed with a single. The Cubs turned Roberto Clemente’s grounder into a 6-4-3 twin killing, but Alou scored for a 1-0 lead.

With two outs in the bottom of the first, sweet-swinging Billy Williams hit a home run to deep right field, evening the score. Ron Santo and Ernie Banks followed with consecutive singles, but Willie Smith grounded out to end the threat.

The game thus shifted into a pitchers’ duel as both Selma and Ellis cruised for the next four innings, combining for seven strikeouts and yielding only five singles.

With the game still tied 1-1 in the sixth, the heart of the order for the Pirates came to the plate. After Clemente’s groundout, lowering his series batting average to .153 (2-for-13 with two walks), the “homer-spiced game” was underway, quipped Jerry Liska of the Associated Press.6 Willie Stargell and Manny Sanguillen sent back-to-back drives into deep center to put Pittsburgh up 3-1.

Santo started the bottom of the sixth with a walk, followed by a single to center field from Banks. Smith hit into a 4-6-3 double play. Next to bat was rookie catcher Ken Rudolph, starting in place of Gold Glover Randy Hundley, who had been injured on a slide into second base in Wednesday’s matchup.7 Rudolph answered the Pirates’ loud sixth with a bleacher blast of his own, the first of his career, to tie the game, 3-3.

A leadoff single by Jeter in the eighth triggered the first pitching change of the game. In to replace Selma was 36-year-old Ted Abernathy. The rubber-armed submariner was acquired in January after leading the NL in pitching appearances in 1967 and ’68 with Cincinnati. Abernathy entered the game with a 2.03 ERA in 28 appearances. Clemente greeted him by slamming a two-run opposite-field shot into the bleachers. A Stargell single followed, ending Abernathy’s outing after just two batters.

Next on the mound was Phil Regan, who had been traded to the Cubs from the Dodgers with teammate Jim Hickman in 1968. Among baseball’s most reliable relievers, the former All-Star was struggling, posting a 5.40 ERA in his last 11 appearances. With one out and the bases loaded, he induced grounders from the Pirates’ weakest hitters, Freddie Patek and pitcher Ellis, to end the threat.

“It took the north siders only five pitches, however,” wrote George Langford of the Chicago Tribune, “to pull even” with the Pirates once again.8 After Williams led off the bottom of the eighth with a single, Santo’s 14th homer of the season went deep into center field to tie the score once more, sending Ellis to the showers.

“I wasn’t expecting anything good,” Santo told United Press International afterward. “Then wow, there it was right over the plate.”9

Replacing Ellis was Chuck Hartenstein, the right-handed ex-Cub and first-year Pirate. Smith singled. Rudolph grounded to third baseman Jose Martinez, whose errant throw to first put runners at the corners. With just one out, Shepard called on southpaw Joe Gibbon to squelch the rally. Hickman grounded into an inning-ending 6-3 double play to move the game into the ninth inning tied, 5-5.

The top of the ninth came and went for the Pirates. The North Siders had a man in scoring position after a two-out walk to Nate Oliver and a hit-by-pitch to Williams. With Santo up to bat, right-hander Bruce Dal Canton replaced Gibbon for Pittsburgh. Shepard’s matchup thwarted the bubbling rally with a fly out by Santo to left field to send the game to extra innings.

In his third inning of relief, Regan ran into trouble. He hit Richie Hebner. Bill Mazeroski followed with a single, but Patek grounded into a 6-3 double play to end the threat.

The Cubs’ 10th began with Banks’s fly out to deep left field. Mr. Cub had been struggling, going 9-for-44 with no homers since June 15. After Don Young whiffed, Rudolph eked a two-out walk to extend the inning, surely receiving a Hundley-like ovation in the process.

Next up to bat was 32-year-old Hickman, nicknamed Gentleman Jim, who entered the game as a pinch-hitter in the bottom of the eighth and stayed in to play right field. Despite being a highly touted prospect coming up with the inaugural 1962 Mets, Hickman never really put it together. He was batting just .196 in limited playing time when the Pirates came to town. In this series, however, he was on a roll, with a single, triple, and a walk in three plate appearances before his eighth-inning double play.

“I was just trying for a hit, a single,” Hickman told UPI.10 “I knew whoever came up behind me would bring in a run.”

On a 2-and-1 count, Hickman blasted a shot deep into the left-field bleachers. “As they say, he got all of that one. He hit it hard and high,” recounted teammate Willie Smith to the Tribune.11 With one swing of the bat, the Cubs completed another walk-off win, their second of the series and eighth of the season.

Maybe it was a game of patterns – the Pirates losing their 13th in a row at Wrigley and the Cubs winning another game at home. The Cubs’ seven-game lead in the NL East on June 26, however, was anything but a continuing pattern. Exactly one year earlier, they were far from a first-place squad, finding themselves in the nine spot of a 10-team league, 13 games back.

“We realize nobody is going to run away with this thing,” Santo told the Tribune after Thursday’s barn-burner victory.12 “There’s pressure every game … but I want to be right up there just as far ahead as I can get.”

As for Hickman, the series against Pittsburgh was key in his turnaround from role player to starting right fielder. The bona-fide underdog of Chicago’s ’69 club, Hickman emerged as the Cubs’ hottest hitter. From the Pirates series through the end of the season, he led the team with 19 home runs and a .544 slugging average.

But Hickman’s efforts were not enough to get the Cubs into the postseason for the first time since 1945. After occupying first place for most of the season and maintaining a five-game lead as late as September 3, the Cubs collapsed, losing 18 of their final 25 games to finish second to the Amazin’ Mets in the NL East.

In addition to the sources cited in the Notes, the authors consulted the Baseball-Reference.com and Retrosheet.org websites for pertinent material and the box scores noted below.