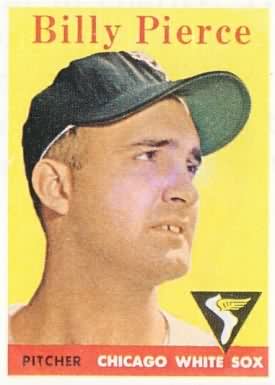 It was the summer of 1958 and Chicago White Sox fans were not happy. The American League standings on the morning of Friday, June 27 showed the team in fifth place, four games under .500, and trailing the first-place Yankees by 11½ games.

But things were looking up a bit on June 27. The Yankees were out of town after taking two out of three from the White Sox and the Washington Senators were coming in for a four-game series. Billy Pierce was to pitch the opener that evening. Pierce had started the season slowly, not winning his first game until May 16. But he had just pitched back-to-back shutouts against Boston and Baltimore, both on three days’ rest. The White Sox fans among the 11,300 who filed into Comiskey Park on June 27 were confident of witnessing a well-pitched game, but they had no idea a brush with baseball immortality was at hand.

Pierce had been scheduled to pitch the finale of the preceding three-game series with the Yankees, but a rainout pushed him into the opener against Washington. The Senators were in last place, 14 games behind the Yankees, and, as the song “Talkin’ Baseball” went, “Ike was the only one winning in Washington”. But as the series opened, the Senators were only 2½ games behind the White Sox. A Washington sweep could dump Chicago into the cellar.

The Washington lineup had some familiar names: Roy Sievers (All-Star in 1956 and 1957), Jim Lemon, rookie Albie Pearson (all 5-feet-5-inches and 140 pounds of him), and Eddie Yost. Eddie had been placed in the fifth spot in the batting order by manager Cookie Lavagetto, despite the fact that he (Yost) did not have the power normally associated with a fifth-spot hitter. He was known more for drawing bases on balls and had acquired the moniker the Walking Man. Rocky Bridges was at short, batting .308 and leading the team in batting.

The White Sox had their Hall of Fame double-play combination in place with Nelson Fox at second base and Luis Aparicio at short. Along with Jim Landis in center, Sherm Lollar catching, and the normally fine pitching staff, the White Sox strength was up-the-middle.

However, the corners, particularly the infield, were a different matter. Billy Goodman was at third and Ray Boone at first, both were former All-Stars obtained in recent trades. But as of this day, Goodman was batting .250 and Boone was at .241.

The first 2½ innings went by quickly. In the bottom of the third, Pierce helped himself at the plate with a lead-off double to left. When Jim Landis followed with a single to left to score Pierce, he had all the offense he needed for the evening in order to post a victory.

Albie Pearson opened the top of the fourth by flying out to right. Pierce had now faced the first 10 batters without a man reaching. The next batter, Rocky Bridges, slammed a liner down the right-field line, foul by a foot, then hit a hard grounder over second. Aparicio gloved it going to his left, spun, and threw to first for the out. Roy Sievers ended the inning by grounding out to Fox and the streak of retired batters was now at 12.

It was three up and three down again in the top of the fifth with Pierce striking out the last two batters. Now there was more intensity in the roar of the crowd. They were becoming aware of the Washington hit column on the scoreboard.

In the top of the sixth, Ken Aspromonte, the Senators’ second baseman, hit a hard shot toward third baseman Billy Goodman, that took a bit of a hop. But Goodman speared it and easily threw out Aspromonte. Catcher Steve Korcheck took a called third strike and pitcher Kemmerer bounced one back to Pierce. 18 batters had now been retired in succession.

The top of the seventh and eighth went by uneventfully. In the bottom of the eighth, the White Sox picked up two runs to make the score 3-0. Al Smith ended the inning by grounding into a force out at second, and the pressure-filled ninth was ready to begin.

The first batter, Ken Aspromonte, hit a hard shot toward second, and Aparicio, just as he did in the fourth, glided to his left, speared the ball, and threw Aspromonte out. Steve Korcheck struck out swinging and only one batter stood in the way of the first perfect game by a left-handed pitcher.

The pitcher Kemmerer was due up. Senators’ manager Cookie Lavagetto sent up a pinch-hitter, reserve catcher Ed Fitz Gerald. The crowd took a deep breath and awaited a historic baseball moment as Fitz Gerald stepped in.

The fans didn’t have to wait long. Fitz Gerald sliced the first pitch down the right-field foul line, fair by anywhere from a foot to five feet. (The distance becomes shorter with each passing year.) Al Smith retrieved the ball and threw it in to Fox as Fitz Gerald pulled into second with a double.

Fox rubbed up the ball as he brought it to Pierce. With his head down and pawing at the ground with his spikes, he commiserated with Pierce as if to say, “Tough break, Bill.” Pierce held out both hands as if to say “Just give me the ball, Nellie”.

Pierce got the ball and strode to the mound to face the diminitive center fielder, Pearson. Pierce stepped on the rubber and hummed three straight fastballs past Pearson in about 30 seconds. He then headed towards the dugout as the 11,300 fans rose in unison with flashbulbs popping.

There was not much of a celebration on the field, just a few handshakes, and then everyone headed for the locker room.

In the locker room, Pierce said the pitch to Fitz Gerald was a curveball. White Sox vice president Chuck Comiskey came over to Pierce. Recalling the leadoff double in the third inning and knowing of Pierce’s pride in his hitting prowess, Comiskey offered the comment, “Nice hitting, Bill.”

Pierce struck out nine and had a three-ball count on only two batters. Fitz Gerald’s hit was the sixth and last ball hit out of the infield by Washington. Kemmerer scattered eight hits, walked one, and struck out three. The game was played in 1 hour and 46 minutes.

Prior to Billy Pierce’s near-perfect game on June 27, 1958, there were only three perfect games in modern-era (since 1901) regular-season history: Cy Young in 1904, Addie Joss in 1908, and Charlie Robertson in 1922. If Pierce had retired Fitz Gerald and completed the perfect game in 1958, it would have been:

In 1964, Jim Bunning, then with the Phillies, pitched the first perfect game after expansion (versus the New York Mets). In 1965, Sandy Koufax became the first left-hander to pitch a perfect game in the modern era (versus the Chicago Cubs).