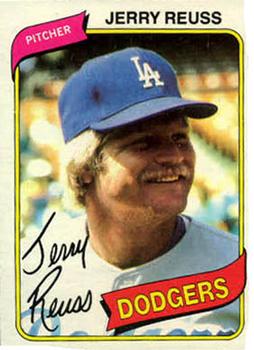 Jerry Reuss was on a roll. He’d returned to the Los Angeles Dodgers’ rotation in mid-May of 1980, replacing Rick Sutcliffe.1 He had won five of his last eight starts, justifying the Dodgers’ decision to move him out of the bullpen.2 Reuss, who would be selected as a 1980 All-Star, entered the game with a 2.08 ERA and an 8-1 record (although three of the wins were in relief). The Giants’ pitcher, Vida Blue, was in the midst of his fifth All-Star season with a 2.71 ERA and a 9-4 record. This was his third year in San Francisco – he had moved across the Bay after nine years in Oakland.

Given the pitchers’ reputations and recent performance, the 20,285 fans surely expected a pitchers’ duel suitable for the long-standing rivalry between the Giants and the visiting Dodgers. That wasn’t what they got, but they did witness some baseball history. Despite the Giants’ 31-38 record (fourth in the NL West, 11 games behind Houston), this was the second-highest attendance for a Giants Friday night game in 1980.3 For their part, the Dodgers were second in the division at 40-29, just two games back of Houston.

The game started with Blue giving up a run before getting an out in the top of the first, but he limited the damage to one run. Davey Lopes singled, stole second, reached third on a bad pickoff throw, and scored on Rudy Law’s single. With Reggie Smith at the plate, Law tried to steal but was caught in a rundown for the first out. Smith struck out and Steve Garvey was out on a foul pop to end the top of the first.

Reuss took the mound with the one-run lead. Bill North grounded out to second, Darrell Evans flied out to left. That brought up Jack Clark. He grounded to Bill Russell at shortstop. Russell made a bad throw to first, with the ball bouncing off the baseline4 out of the reach of Garvey. Russell was charged with the error.5 At the time, no one thought much of it because Rich Murray grounded into a force out at second, ending the inning. According to Reuss, he was thinking no-hitter from the start, saying he would think “no-hitter” any time he retired the side in the first.6 Something else no one thought significant at the time was that Clark strained his knee running to first and had to come out of the game in the sixth. Given Clark’s success against lefties in 1980,7 the substitution increased the chance of a no-hitter.

Ron Cey hit a one-out double in the top of the second but didn’t score. The Giants issued a two-out intentional walk to Steve Yeager to bring Reuss to the plate. The strategy paid off – Reuss grounded to first.

In what would be a typical inning in this game, Reuss got three groundouts in the bottom of the second: Larry Herndon grounded to second, Joe Strain grounded to short, and Johnnie LeMaster grounded to third.

Lopes was up again to open the third inning – this time he tripled and scored on Law’s groundout for a 2-0 lead. Again, Blue limited the damage to one run by inducing groundouts from Smith and Garvey.

The three-up, three-down bottom of the third at least provided some variety: Mike Sadek looked at strike three, Blue flied out, and North grounded to short.

All Blue allowed in the top of the fourth was a two-out single by Russell. Reuss collected two more groundouts after a foul popout in the bottom of the frame.

The action picked up again in the top of the fifth. Reuss and Lopes both struck out, so it looked like a quick inning for Blue with the score a manageable 2-0 in favor of the Dodgers. But eight more batters would step into the batter’s box before the Giants finally recorded the third out. Law started the onslaught with a double and scored on Smith’s single. Garvey singled as well, putting two on for Dusty Baker. He hit his 17th home run of the season, bringing the score to 6-0, Dodgers. That wasn’t enough to knock Blue out of the game, but the double he allowed to Cey was.

With Cey on third (he’d taken third on a throwing error), Blue was replaced by Tom Griffin. He allowed singles to Russell (scoring Cey) and Yeager before finally getting that elusive third out – Reuss, who had opened the inning, was out on a foul pop.

Griffin had an equally efficient top of the sixth, disposing of Lopes, Law, and Smith. While Reuss was in the dugout, a Giants fan leaned over the dugout railing and said, “Way to go, Jerry. You’ve got a no-hitter going. Keep it going.” Reuss took the attempted jinx with a sense of humor, responding, “Last time I leave that guy any passes.”8

After striking out Sadek for the first out of the bottom of the sixth, Reuss faced Terry Whitfield, pinch-hitting for Griffin. Whitfield grounded out and North flied out to end the inning.

The Giants added a run in the top of the seventh with a leadoff homer from Garvey off Gary Lavelle, bringing the score to the final 8-0, Giants. Lavelle also allowed a two-out single to Russell and a double to Yeager, but Russell held at third. Lavelle escaped the inning with no further scoring by inducing Reuss to ground out.

In the bottom of the seventh, Reuss faced Evans, Jim Wohlford (who had taken over right field from Clark in the sixth), and Murray, retiring them on two fly outs and a groundout. Clark had strained his knee running for the base in the first. Given Clark’s lifetime average of .371 against Reuss, Reuss was glad for the substitution.9

Lavelle allowed singles to Lopes and Law to open the eighth. Although Lopes made it to third on Garvey’s one-out groundout, he was left there when Baker was out on a foul pop.

In a repeat of the bottom of the second, Reuss induced groundouts from Herndon, Strain, and LeMaster in the bottom of the eighth, with the fans beginning to cheer for Reuss despite the rivalry.10 The first out was probably the closest he came to losing the no-hitter: Third baseman Cey had to dive for a ball heading to left field but made the throw to first in time for the out.11

Lavelle made quick work of the Dodgers in the top of the ninth: Cey and Russell flied out, Yeager grounded out.

Before Reuss could take the mound for the ninth he had to deal with a minor incident in the dugout. His batting helmet fell out of the rack and struck Dodgers manager Tommy Lasorda on the head. Lasorda insisted on sitting in the same seat throughout the game, although Reuss professed no such “superstitiousness.”12 Reuss kept the same seat through the game, marked with his jacket – not for superstition, but so he’d know where the jacket was when he returned to the dugout.13

Bottom of the ninth. Last chance for the Giants to prevent Reuss from adding his name to the record books. Despite the rivalry, the Giants fans were on their feet, cheering for Reuss.14 Sadek grounded to third for the first out. Rennie Stennett, pinch-hitting for Lavelle, grounded to shortstop for the second. North stepped to the plate. Reuss was looking for a strikeout to cap his memorable outing,15 but he had to settle for a groundout. North grounded back to Reuss, whose toss to first sealed the no-hitter.

The celebration was on: hugs, back slaps, and congratulations, followed by champagne in the locker room.16 Reuss credited his sinking fastball with inducing the weak contact that made the no-hitter possible.17 He got only two strikeouts, seven fly outs, and a foul pop, compared with 17 groundouts. He needed only 112 pitches18 in a game that took 2 hours, 13 minutes.

Reuss continued his success through the year, finishing with an 18-6 record and a 2.51 ERA. He was second in the Cy Young Award voting behind Steve Carlton of the Phillies. Although the Dodgers spent much of September in first place, they finished the year tied 92-70 with Houston. Los Angeles lost the tiebreaker game so Reuss had no chance to pitch in the postseason that year.20 The Giants stayed in fourth place in the division, finishing 17 games back.

In addition to the Retrosheet and Baseball Reference information, the author read Reuss’s autobiography, Bring in the Right-Hander! (Lincoln: University of Nebraska Press, 2014). There is a chapter devoted to the no-hitter.

2 Reuss had also been shifted from bullpen to starter in mid-1979. In prior years he had been a starter, although he had some relief appearances in 1978. For the details and his reaction to the role changes, see his SABR biography.

3 The highest Friday night attendance came on June 6, at 26,822. Friday night games at Candlestick were not well attended compared with Saturday and Sunday games. Typical Friday attendance in 1980 ranged from 7,000 to 10,000, dropping below 5,000 by the end of the season. However, the weather may have had a favorable effect on this game’s attendance: Candlestick was notorious for cold, wind, fog, and dust, but this night was exceptionally pleasant and warm. Ross Newhan, “Candle in the Wind,” Los Angeles Times, September 28, 1999; Jerry Reuss, Bring in the Right-Hander! (Lincoln: University of Nebraska Press, 2014), 113.

5 This was Russell’s eighth error of a 19-error season, following 30 errors the previous year. He was in the “top” five in errors committed at shortstop in eight years of the 13 in which the majority of his appearances were at shortstop.

17 Salter, “Russell Admits He Goofed,”; “Reuss ‘Felt’ No-Hitter from Start.” It had been almost a decade since the previous Dodgers no-hitter: Bill Singer on July 20, 1970, against the Phillies. Reuss had taken a no-hitter into the ninth inning on June 18, 1972, but allowed a leadoff double to Larry Bowa as the only Phillies hit in that game.

18 “Russell Unhappy Over First Inning Error.” Reuss recalls 99 pitches, 66 for strikes, with nothing but fastballs from the seventh through the end of the game. Reuss, Bring in the Right-Hander!, 114.

20 The next year was a different story. Reuss pitched and won Game Five of the 1981 World Series. The Dodgers beat the Yankees in six games.