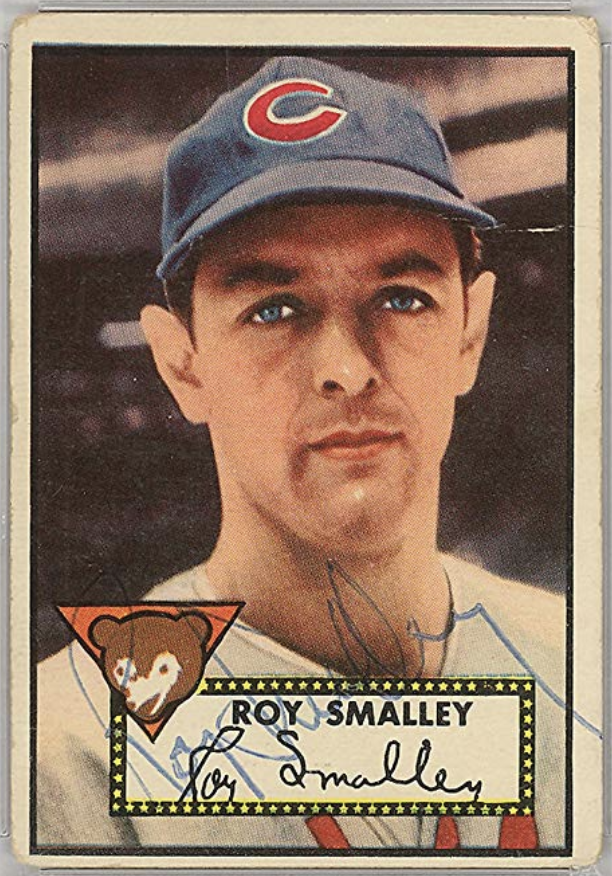 The Chicago Cubs “swished home run bats that belted big George Munger out of the box within three innings”1 and went on to crush the St. Louis Cardinals 15-3 at Wrigley Field, behind the hitting-for-the-cycle performance of Roy Smalley. The overcast skies “and a few drops of rain”2 before game time did not deter the crowd of 12,109 from rooting the home team on.3

Doyle Lade pitched for Chicago, making just his fifth start of the season and first start in three weeks. He had been predominantly a reliever for manager Frankie Frisch in 1950, and in his five-season career (all with the Cubs), he started 64 of the 126 games in which he appeared. Lade was opposed by three-time All-Star Red Munger, a solid member of the Cardinals rotation, bringing a 3.54 ERA into the game.

Chicago had been holding down fourth or fifth place in the National League since about mid-May, with even a one-week drop into sixth near the end of May. With a 29-29 record, their longest winning streak of the season was just four games (twice), and their longest losing streak was only three games (also twice), but they had dropped their previous three, having been “spanked twice by the Cardinals”4 on June 27. That doubleheader sweep placed St. Louis in a tie for first place with the Philadelphia Phillies.5

St. Louis got to Lade in the opening frame, as Tommy Glaviano doubled into the left-center gap. Two batters later, Stan Musial stroked a double to left, scoring Glaviano, but Musial was tagged out trying to stretch the hit into a triple.

The Cubs responded in the bottom of the second. With one out, Hank Edwards singled into right field. Smalley followed with a blast over the left-field wall, his 12th home run of the season, and this put Chicago ahead. An inning later, Bob Ramazzotti beat out a bunt single to third. Rube Walker drew a free pass from Munger, and Phil Cavarretta sent a Munger offering over the right-field wall. The first three Cubs batters had scored, prompting Cardinals skipper Eddie Dyer to make a change. Cloyd Boyer relieved Munger and retired the Cubs in order. He pitched two scoreless frames but was taken out of the game after injuring his ankle on a baserunning play. With two outs in the top of the fifth, Boyer singled. Glaviano followed with another single, and Boyer hurt his left ankle running to second base. Erv Dusak came in to run for him, but the Cardinals could not capitalize.

Jim Hearn entered as the new St. Louis pitcher. Boyer had faced seven batters, yielding only one hit, a harmless double to Smalley in the bottom of the fourth. Hearn then finished the pitching duties for the Cards, pitching the final four innings. He retired Walker on a popout to short to start the home team’s fifth, but then Cavarretta singled, Hank Sauer walked, and Andy Pafko “hit his tenth home run into the left field bleachers.”6 Edwards and Smalley each grounded to second. Chicago’s first eight runs were driven in with home runs.

Singles by Enos Slaughter and Bill Howerton and a sacrifice fly by Red Schoendienst plated the Cardinals’ second run of the game in their half of the sixth inning. Hearn became a bit unglued in the bottom half. After Bill Serena worked a leadoff walk, Lade put down a sacrifice bunt, but Hearn made a throwing error and both runners were safe. Ramazzotti then bunted (with an 8-2 lead), advancing the runners. Hearn uncorked a wild pitch and Serena scored. Walker singled in Lade, and the pitcher scored Chicago’s 10th run of the game.

St. Louis loaded the bases with one out in the top of the seventh, and a groundout by Musial drove in a run, his second RBI of the day. According to the Chicago Tribune, “The Cubs had so much fun in their last two rounds that they netted seven hits, four of them for extra bases.”7 In the seventh, Edwards doubled, Smalley singled, and Serena doubled before Hearn retired a Chicago batter. With one out, Ramazzotti hit an RBI single, driving in Serena. Sauer “opened the eighth with a double for which he is going to write Johnny Lindell and Bill Howerton a note of thanks.”8 A routine fly ball dropped between the two outfielders. Sauer moved to third on Pafko’s sacrifice bunt (Chicago’s third of the game). Edwards singled and Smalley tripled, bringing the score to 15-3. Roy Smalley had hit for the cycle.

Lade limited the Cardinals’ powerful lineup to nine hits; St. Louis tallied solo scores in three different innings. Lade earned his fourth victory of the season. It was his first complete game of the season. The 15 runs scored were the most for the Cubs thus far in the 1950 season. Four games later, on July 2, they tallied 16 runs in a shutout against Cincinnati.

Glaviano was the leading Cardinals batter with two doubles and a single, but he scored only one run. Musial drove in two. Munger didn’t survive the third inning, and his record fell to 3-5. Hearn had faced 26 Cubs batters, and he allowed 10 runs (nine earned) on 10 hits and three walks.

Every Cubs position player had at least one hit and every player, including pitcher Lade, scored at least one run. Chicago displayed its home-run power, as Pafko and Cavaretta each hit three-run shots, and Smalley’s blast was good for two runs. Smalley had been batting in the seventh spot of the batting order, probably due to his .257 average. His 4-for-5 game raised that mark 13 points.

Smalley became the third Cubs player to hit for the cycle, joining Hack Wilson (June 23, 1930), and Babe Herman (September 30, 1933).9 There were five cycles in the 1950 season: Detroit’s George Kell (June 2)’ Pittsburgh’s Ralph Kiner (June 25, just three days before Smalley); Smalley; the Philadelphia Athletics’ Elmer Valo (August 2); and Detroit’s Hoot Evers (September 7). Seven years would go by before the next player in a Cubs uniform hit for the cycle (Lee Walls on July 2, 1957).

5 According to retrosheet.org, the Phillies and Cardinals were tied for first place, as Philadelphia was 35-24-1, and St. Louis was 36-25. However, baseball-reference.com placed the Cards in second place, one-half game behind the Phillies (presumably because of the tie game). Both the St. Louis Post-Dispatch and Chicago Tribune have the two teams tied at the end of play on June 27, 1950.

9 Jimmy Ryan hit for the cycle twice in the nineteenth century: on July 28, 1888, as part of the Chicago White Stockings, and on July 1, 1891, as a member of the Chicago Colts. Both of those teams were predecessors of the Cubs.