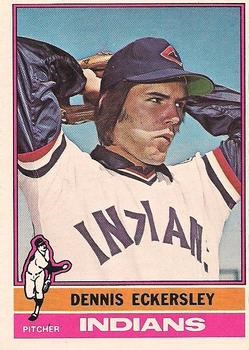 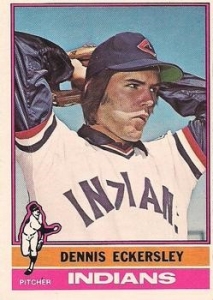 On June 29, 1972, newspaper readers in one California city learned that a new pitcher had arrived in the Class A California League. In a short roundup of league action from the previous night, the Fresno Bee reported that the Reno (Nevada) Silver Sox had won the second game of a doubleheader against the Visalia (California) Mets “behind Dean Eckersly’s [sic] eight-hit shutout.”1

The paper might be forgiven its error. Dennis Eckersley was 17 years old, fresh out of high school, and making his first appearance in a professional game. The Cleveland Indians had selected him only about three weeks earlier in the third round of the amateur draft. His name had not yet graced a major-league roster, as it would for 24 seasons. Nor had it been cast in bronze on a Baseball Hall of Fame plaque, as it was in 2004 in recognition of his excellence as both a starter and a relief pitcher.

As of June 28, both Eckersley’s career and the second half of the 1972 California League season were in their earliest days. The Silver Sox, an Indians farm team, finished last in the first half of the season with a 25-43 record, 22 games behind first-place Bakersfield. Visalia ended the first half in fifth place at 33-37, 15 games back.2 In the second half, the Silver Sox were tied for third place with a 3-2 record, one game behind Modesto and Fresno, while Visalia’s 2-3 record tied them for fifth with Bakersfield.3 Both teams were helmed by former major leaguers—Lou Klimchock in Reno, Joe Frazier in Visalia.

The teams had faced off the night before, with Visalia winning 9-4.4 The loss went to 19-year-old Larry Andersen, who gave up 12 hits and 6 runs in 6⅓ innings. Like his teammate Eckersley, Andersen pitched in the major leagues well into the 1990s, then established a successful career as a major-league announcer.5

In the first game of the June 28 twin bill, Visalia again came out on top, 4-2, in front of 246 spectators. Future Met and Angel Ike Hampton drove in all four Visalia runs with a three-run homer and a single, while pitcher Cecil Reynolds threw a complete game to pick up the fourth of his 12 wins that season.6

That set the stage for Eckersley’s debut in the second game. The lineup he faced included four future major leaguers: Bruce Boisclair at first base, Greg Harts in left field, Benny Ayala in right field, and catcher Jay Kleven. Hampton also appeared late in the game, unsuccessfully pinch-hitting for starting pitcher Rick Wagener. Wagener, a 23-year-old lefty, had been a second-round pick of the Mets out of West Virginia University in the January 1971 secondary draft. He went 7-11 with a 3.47 ERA in 31 games for Visalia in 1972, splitting his time fairly evenly between starting and relieving.

Two future major-leaguers took the field behind Eckersley: Jeff Newman played first base and Duane Kuiper second base. Catcher Chuck Erickson, a former San Francisco Giants farmhand with two years of minor-league experience, had been recently signed by the Indians organization Eckersley admitted to rookie jitters going into the game: “I was a little nervous going into the game. Once the game got started and I pitched to a couple batters, I was all right.”7

Neither team scored in the first two innings. Reno, which had jumped out to a 2-0 lead in the first game before falling behind, again scored first in the nightcap. First baseman and cleanup hitter Dan Covert hit a Wagener pitch for his ninth home run, giving the home team a 1-0 lead. It was Covert’s last dinger of the season in the California League. A few weeks later, the Indians promoted him to Elmira of the Double-A Eastern League, where he hit two more homers in 44 games.8

Eckersley found himself in his first professional jam in the fifth inning. Kleven, who went 3-for-3, and Wagener started the inning with consecutive singles. “I knew I had to bear down and get somebody out,” Eckersley said later. Kuiper—still another future big-league announcer on the Reno roster9—came to his rescue, fielding Visalia center fielder Jeff Anderson’s hard-hit grounder and starting a double play. The next batter, Boisclair, also grounded to Kuiper to end the inning. Klimchock later called the double play the most important play of the game.10

Shortstop Ron Ellis, Kuiper’s double-play partner, gave Eckersley some insurance runs in the sixth inning. His two-run double off Wagener scored Covert and Erickson for a 3-0 Reno lead. Ellis also bailed Eckersley out of a seventh-inning jam, when the Mets loaded the bases with two out. The shortstop snagged a line drive by Boisclair to end the game.11 Despite a .232 average at Reno, Ellis was promoted to Elmira in early July together with Covert; he hit a scant .210 there.12

Both starting pitchers worked complete games. Wagener gave up seven hits and three runs in six innings, walked three, and struck out six; his record dropped to 1-7. Eckersley allowed a substantial number of baserunners—eight singles, two walks, and two hit batsmen in seven innings. He also threw a wild pitch. But he held Visalia off the scoreboard while displaying “a strong arm” and “the ‘cool’ of a veteran,” according to the Reno newspaper’s account of the game. Eckersley wrapped up his maiden voyage in exactly two hours, and the sad-sack Silver Sox claimed a rare win. It was Eckersley’s only shutout of his rookie year.

The pitcher took some lumps over the rest of his first season, finishing with a 5-5 record and 4.80 ERA in 12 starts. Still, some of the traits that later made Eckersley a Hall of Famer were already in evidence. Just a few weeks after his debut, manager Klimchock marveled over Eckersley’s pinpoint control: “His pitches all seem to be around the plate. When he misses a strike it’s not by much. It’s odd to see such a young guy have so much control.”13 For the last few weeks of the season, Eckersley slept in the back of a truck with teammates Andersen and David Sloan. Andersen later explained that their lease expired in August before the season ended.14

Eckersley improved to 12-8 in 31 starts in Reno the following year, then went 14-3 at Double-A San Antonio in 1974. He made the Indians out of spring training in 1975, went 13-7 in his first year, and never looked back—accumulating a no-hitter, a 20-win season, Cy Young and Most Valuable Player Awards, six All-Star Game appearances, a World Series title with the 1989 Oakland A’s, 390 saves, and finally a Hall of Fame plaque.15

Neither Baseball-Reference nor Retrosheet provides box scores of minor-league games, but the June 29, 1972, edition of the Reno (Nevada) Gazette published a box score.

The author thanks the Tulare (California) County Library for research assistance.

Image of 1976 O-Pee-Chee card #98 downloaded from the Trading Card Database.

5 Andersen began working Philadelphia Phillies game broadcasts in 1998 and, as of 2022, was still doing so as a radio commentator. As of 2022, Eckersley has worked on Boston Red Sox TV broadcasts since 2003, and has also provided studio analysis and game commentary for TBS.

7 Yacknow. Incidentally, sportswriter Jim Yacknow was a former minor-league ballplayer who topped out at Double A and played parts of two seasons in Reno. He also served as general manager of the Reno Silver Sox before working for 36 years at an energy company. Yacknow died in 2012. Legacy.com obituary for Jim Yacknow, accessed online May 27, 2021.

12 “Sox’ Andersen Is Getting Stronger.”

15 After 1974, Eckersley returned to the minor leagues only once. In his final season, 1998, he pitched two games for the Boston Red Sox’ Triple-A team in Pawtucket, Rhode Island.