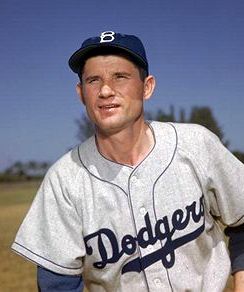 The second game of a Sunday doubleheader on June 3, 1951, at Ebbets Field, began shortly after Brooklyn Dodgers starter Don Newcombe beat the Chicago Cubs 8-3 in the opener. Gil Hodges and Billy Cox, helped out by hitting home runs, while Duke Snider drove in three.1

Amid a career year, Preacher Roe, of spitball fame,2 went to the mound for Brooklyn in the second game. In his nine prior starts in the 1951 season, Roe was 6-0 with six complete games and one shutout. He and Newcombe were mainstays of the Dodgers’ pitching rotation, having both been named National League All-Stars in 1949 and 1950. They each recorded 19-11 won-loss records in 1950 and completed 36 games between them.

The Cubs countered with Turk Lown3 to pitch the second game. Lown, born and raised in Brooklyn, had been signed by the Dodgers in 1942 and progressed up to the Triple-A Montreal Royals until he was drafted by the Cubs in 1950. This was only Lown’s second major-league start; he made his debut on April 24 when he pitched seven innings and lost to the Pittsburgh Pirates.

Tommy Holmes covered the Dodgers for the Brooklyn Eagle and became known for his sprightly writing style. After the June 3 game, he wrote, “Roe got himself involved in first-class mangel-wurtzel,” also noting that “Preacher Roe became entangled in a real ring-tailed dilly of a ballgame in the alterpiece.”4

The Dodgers took the lead in the first inning. Cox lined a one-out double to left field. After Snider walked, Cubs manager Frankie Frisch was thrown out of the game during an argument with umpire Lon Warneke.5 Following that brief interlude, Jackie Robinson lined a single to left, scoring Cox. In the top of the fourth inning, the Cubs opened with singles by Randy Jackson and Frank Baumholtz. Hank Sauer struck out swinging, and Andy Pafko was intentionally walked to load the bases. Roe limited the damage to a single run by getting Smoky Burgess on an RBI groundout and striking out Dee Fondy. The Dodgers responded quickly in the bottom of the inning. Robinson drew a one-out walk, stole second base and advanced to third on a throwing error by Burgess. Hodges walked and when he was thrown out trying to steal second, Robinson scampered home from third to give Brooklyn a 2-1 lead.

Roe was perfect over the next three innings until the Cubs tied the score in the eighth. Singles by Jack Cusick and Wayne Terwilliger followed by a line-drive single to right field by Randy Jackson scored pinch-runner Hal Jeffcoat. Dutch Leonard replaced Lown on the mound for the Cubs. The ninth inning was relatively uneventful except that the lights at Ebbets Field were turned on at the start.

Roe was challenged to keep the game even in the 10th inning. Cusick opened the frame with another single. After Leonard’s unsuccessful sacrifice bunt that resulted in a force out at second, Terwilliger walked to put runners on first and second. But Roe struck out Jackson and got Baumholtz on a groundout to end the threat.

The Dodgers were in a position to win the game in the bottom of the 10th inning and strategy abounded on both sides. Carl Furillo singled to center off right-hander Leonard and advanced to second on a successful sacrifice by Rocky Bridges. Roe, batting .125 for the season, hit for himself and fouled out to first for the second out. The Cubs intentionally walked left-handed-hitting Cal Abrams, who was batting .330 on the season.

Brooklyn countered by pinch-hitting another left-handed batter, Gene Hermanski, for Cox, who already had six hits in the doubleheader. Hermanski’s line-drive RBI single to left field on a 1-and-2 count dramatically ended the game and gave the Dodgers a doubleheader sweep.

After throwing 152 pitches and a complete game, Roe moved his record to 7-0 en route to a career-best season. He won his first 10 decisions and another 10 in a row later in the year. He finished the season 22-3 with a 3.04 ERA, posting career bests for victories, starts (33), innings (257⅔), and complete games (19). Going into the 2017 season, his .880 winning percentage was still a National League record for a 20-game winner.

The Cubs dropped to 20-20 after the doubleheader loss and 5½ games behind the Dodgers. Their season was slipping away. Just two Sundays before, they had beaten the Boston Braves in a Sunday doubleheader at Wrigley Field to remain in second place, one game behind Brooklyn.

About the Dodgers, Joe King wrote, “Life was never sweeter in Flatbush than it was in the past week, because the Dodger fans for the first time got the idea they might have pitching, too.”6 The complete-game wins by Newcombe and Roe followed Ralph Branca’s five-hitter that helped beat the Cincinnati Reds 2-1 the day before; the Dodgers were now 27-16.

The Cubs would face the Dodgers again in two weeks for a three-game series at Wrigley Field. By that time, they had lost 9 of their last 11 games and dropped into seventh place, 10½ games behind the first-place Dodgers. The arrival of the Dodgers coincided with the June 15 trading deadline and some surprising news.

The Dodgers acquired outfielder Pafko, infielder Terwilliger, pitcher Johnny Schmitz, and catcher Rube Walker from the Cubs for outfielder Hermanski, infielder Eddie Miksis, pitcher Joe Hatten, and catcher Bruce Edwards. Only Hatten and Edwards had not played in this Sunday doubleheader. The Dodgers were eager to have Pafko play left field and strengthen an outfield that already included Snider and Furillo.

Cubs fans were irate. They labeled the trade a panic move by the Cubs front office.7 Frisch told Chicago Tribune sportswriter Edward Prell, “We had to do something.”8 On July 21, they did something else and replaced Frisch as manager with first baseman Phil Cavarretta.

The trade also created uproar and rumor around the National League.9 Pee Wee Reese recalled speaking to players who told him after the trade, “Now you’ll probably win it by 30 games.”10 Headlined on the front page of The Sporting News, J.G. Taylor Spink wrote, “In 1952, it is learned from a reliable source, the Cubs will receive outfielder Duke Snider in exchange for $200,000 in cash, as the finale of the multiple-player swap.”11 So perhaps for Dodgers fans, the 1951 season should be remembered for what didn’t happen to Snider rather than what did happen to Brooklyn on October 3 at the Polo Grounds, the day that the Giants’ Bobby Thomson hit the fabled shot heard ‘round the world.12

In the spirit of accurate reporting, the author doesn’t recall whether he, his father, and Uncle Joe saw Gene Hermanski hit that walk-off single. I suspect we did not. The exodus from Ebbets Field began earlier in the second game. By the time Hermanski delivered the winning hit, it appeared that nearly half of the original crowd had departed.13

In addition to the sources cited in the Notes, the author also accessed Baseball-Reference.com (baseball-reference.com/boxes/BRO/BRO195106032.shtml) and Retrosheet.org (retrosheet.org/boxesetc/1951/B06032BRO1951.htm).

2 In Warren Corbett’s SABR biography of Preacher Roe, the opening paragraph details the pitcher’s confession and his mechanics for throwing a spitball as originally reported by Dick Young in“The Outlawed Spitball Was My Money Pitch,” Sports Illustrated, July 4, 1955: 18-21.

3 In his biography of Turk Lown, Adam Ulrey rememberedLown’s signature season in 1959 on the other side of Chicago for the pennant-winning White Sox. Lown went 9-2 with a league-leading 15 saves, and had a 2.89 ERA in 60 appearances. He teamed with Gerry Staley (8 wins, 14 saves, 2.24 ERA) to give the White Sox a dominant bullpen.

5 Ben Gould, “Early Bird Starts Frisch on His Hard-Luck Sunday,” The Sporting News, June 13, 1951: 22. A rude awakening by a catbird at 6 am was followed by Frisch locking his keys in his car, being tossed by umpire Lon Warnekeand losing a doubleheader to the Dodgers!