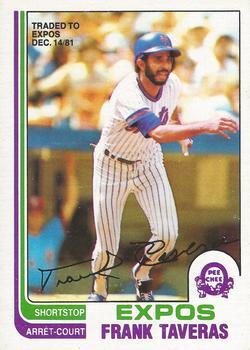 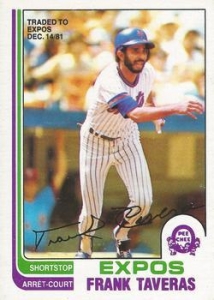 On the back cover of his album The Nylon Curtain, released in September 1982, singer-songwriter Billy Joel is pictured enjoying a cup of coffee and a cigarette while reading the newspaper. The paper in front of him is easily identifiable as the New York Times, and a baseball-related headline is visible: “Expos Top Punchless Mets.”1

Joel’s popularity meant that millions of music lovers saw the headline about the New York team’s defeat. In the United States alone, The Nylon Curtain has been certified multiplatinum, representing sales of more than 2 million copies.2 The album produced two US Top Forty singles,3 reached the US Top Ten4 late in 1982, and was nominated for the Grammy Award for Album of the Year, though it lost to Toto’s Toto IV.5

All well and good. But what’s the story behind the headline? Assuming the paper was real and not a prop assembled for the photo shoot, when did the actual Expos-Mets game happen? Who were the heroes, and who were the goats?

A search of the New York Times archives shows that the headline appeared on page B11 of the July 1, 1982, edition, atop the “jump” or second half of a story covering the previous night’s Expos-Mets matchup in Montreal. (The main headline of the story, appearing on page B9, was “Mets’ Batters Fail in 4-1 Loss.”)

The National League East rivals entered the game further apart, competitively, than their records indicated. Jim Fanning’s Expos, who fell one win short of the World Series the prior season, had a 39-32 record and trailed first-place St. Louis by just 1½ games. (The Philadelphia Phillies, one game back in second place, separated the Cardinals and Expos.)

George Bamberger’s Mets entered the day tied for fourth place with a 36-38 record, six games back. The team had lost eight of its previous 10 games and had also dropped seven of its 11 matchups against the Expos thus far in the season. The prior night, though, New York had held on for a 5-4 victory against Montreal.

“Punchless” was proving to be a more than adequate descriptor of Bamberger’s team. Over the course of the full season, the Mets ranked last or second to last in the NL in hits, batting average, on-base percentage, and slugging average. Newly arrived left fielder George Foster, the former Cincinnati star, had fallen from his 1977 peak of 52 home runs. In 1982 he managed just 13 round-trippers—still enough to rank him second on the Mets, trailing only first baseman Dave Kingman’s 37.

New York-born lefty Pete Falcone got the start on the mound for the Mets. Capable of starting or relieving, Falcone entered the game with a 4-4 record and a 3.38 ERA. He’d pitched a complete-game loss against Philadelphia in his previous start, on June 25, walking in the game’s only run with two out in the ninth. He’d made three previous appearances against the Expos in 1982, taking the loss on June 21 in a start in which he was knocked out in the fourth inning.

Opposing Falcone for the Expos was righty Bill Gullickson, who had a 4-7 record and a 3.97 ERA. Gullickson had tied a major-league record in his first start of the season, on April 10 against Philadelphia, when he became the third pitcher to throw six wild pitches in a game. He’d also had some trouble keeping the ball in the park, having allowed 11 home runs—fourth-most among NL pitchers. The Mets had beaten Gullickson in his previous start, on June 24, when he worked six innings and took a 3-1 loss. Two other starts against the Mets early in the season did not yield decisions.

Both teams used the Wednesday night game to provide backups and role-players with starting work. Rusty Staub, not yet a full-time pinch-hitter, started at first in place of a slumping Kingman.6 Mike Jorgensen, whose 120 games and 114 at-bats in 1982 signaled primary use as a pinch-hitter, got a rare start in right field. Phil Mankowski played third base, making the second of his 13 appearances for the Mets that season. Meanwhile, Montreal gave starts to backups Frank Taveras and Dan Norman at second base and center field. The 1982 season was the final big-league season for Mankowski, Taveras, and Norman.7

The Mets frustrated their fans from the very first inning, when a walk to catcher John Stearns and a double by Staub put runners on second and third with one out. After a strikeout by Foster, Gullickson walked Jorgensen to load the bases. Another strikeout by Mankowski ended the rally.

Meanwhile, Montreal struck quickly and resolutely. Third baseman Tim Wallach, batting third in the lineup due to an injury to Andre Dawson,8 hit his 11th homer of the year in the first inning for a 1-0 lead. Leading off the second, catcher Gary Carter—a future hero of the World Series champion 1986 Mets—cranked his 15th round-tripper to double Montreal’s lead. (These homers were the 10th and 11th surrendered by Falcone, tying him with Gullickson for fourth-most in the league.) This early advantage turned out to be all the runs the Expos needed, though neither team was finished scoring yet.

The Mets resumed their close-but-no-cigar offensive follies in the third. A single and an error by Montreal first baseman Al Oliver put New York runners at first and third with none out. Staub’s liner to Taveras at second, Foster’s foul popup to third, and Jorgensen’s strikeout wasted the opportunity.

The bottom half of the Mets’ order finally produced a run in the fourth. With one out, second baseman Wally Backman walked. Shortstop Ron Gardenhire, who had won the previous night’s game with his first big-league homer, tripled to make the score 2-1. It was Gardenhire’s first big-league triple, his only three-bagger of 1982, and one of only three he hit in a five-season career. Falcone struck out looking and center fielder Mookie Wilson whiffed swinging, stranding the tying run at third base. Gullickson had now struck out seven Mets in four innings. He ended up with 10 whiffs.

After a quiet period, the Expos completed the game’s scoring in the seventh, starting with a one-out double by Oliver and an intentional walk to Carter. Right fielder Warren Cromartie9 singled to right, scoring Oliver and moving Carter to third. One batter later, Falcone threw a wild pitch past Stearns, allowing Carter to score for a 4-1 Montreal lead. Falcone gave way to reliever Ed Lynch, who got an inning-ending line-drive double play.

The 22,385 fans got to see the last of Taveras’s 44 career triples in the bottom of the eighth, though Wallach stranded him at third base.11 Reardon closed out a perfect ninth by striking out Wilson, the 11th strikeout of the night for Montreal pitchers. Gullickson earned the win, Falcone took the loss, and Reardon got his 13th save.

Hitting coach Jim Frey acknowledged the Mets’ struggles: “We’ve had a problem now for a couple of weeks. We get scoring opportunities and we don’t get them in. I don’t know if we’re overanxious or what it is.”12 Foster promised improvement in his performance: “I am not disappointed with what I have done so far and I am not frustrated. I look at the whole season, not just a few months. A player who is consistent is going to be productive, not just productive in the first half.”13

Neither team caught fire the rest of the way, and by the time The Nylon Curtain was released on September 27,14 both Montreal and New York were out of pennant contention. The Expos finished the season in third place at 86-76, six games behind the World Series champion Cardinals. The Mets slid all the way to last place with a 65-97 record, 27 games back. Fanning was replaced by Bill Virdon during the offseason, while Bamberger was fired early in June 1983.

The New York Times archive reveals one other baseball tidbit relevant to The Nylon Curtain. The New York Yankees also lost on June 30, 1982, dropping an extra-inning game to the eventual American League champion Milwaukee Brewers. The page featuring the “Expos Top Punchless Mets” headline also included a headline higher up reading: “Brewers Beat Yanks, 9-7, in 12.” However, the top portion of the paper was cropped out and is not shown on the album cover—so only the “punchless Mets” achieved rock ’n’ roll immortality as losers.15 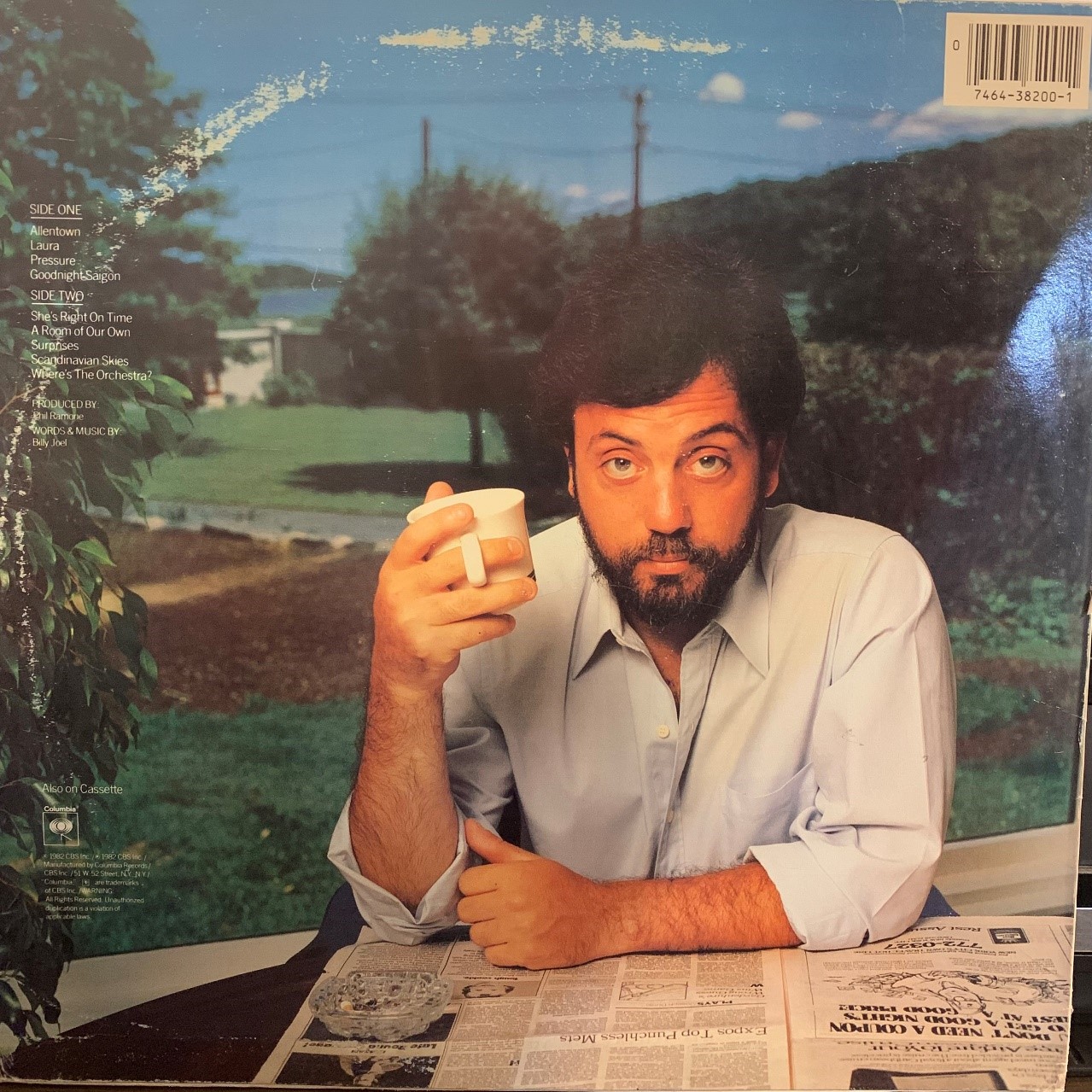 1 The headline is visible on the original LP cover and the smaller CD version, but twenty-first-century listeners who purchase The Nylon Curtain as digital MP3 files won’t see it.

3 The hit singles from the album were “Pressure” and “Allentown.” The lyrics to the album version of “Pressure” include a baseball reference, although that verse is cut from the shorter single version: “Here you are, in the ninth / Two men out and three men on.”

8 Ian MacDonald, “Squirrel Provides Only Laughs for Big O Fans as Mets Take Win,” Montreal Gazette, July 2, 1982: C1. This article summarizes the games of June 30 and July 1, which the Mets won. The Gazette did not publish on July 1, a national holiday in Canada. The New York Times described Dawson’s injury as a sprained left knee.

9 Cromartie achieved his own album-cover recognition on a different hit album released in September 1982: Signals, by the Canadian progressive-rock band Rush. The album’s back cover features a blueprint for a fictional subdivision that includes a “Warren Cromartie Secondary School,” and the liner notes thank Cromartie and the Expos. Signals was also a Top Ten hit on the US album charts and has been certified platinum in the United States as of November 2021, representing sales of a million copies.

14 As of November 2021, the album’s Wikipedia page quoted a release date of September 23, 1982. However, several news stories published on September 23, 1982, cited the following Monday, September 27, as the album’s expected release date. Newspapers publishing these stories included the Philadelphia Daily News and Philadelphia Inquirer, the Fort Worth (Texas) Star-Telegram, and the Allentown (Pennsylvania) Morning Call. This last publication had a particular interest in the album, since one of its singles was “Allentown,” a song about the city’s decline.

15 The Yankees’ absence from the photo could be seen as ironic, given Joel’s previous reference to the team in the lyrics of his 1978 song “Zanzibar”: “Rose, he knows he’s such a credit to the game / But the Yankees grab the headlines every time.”