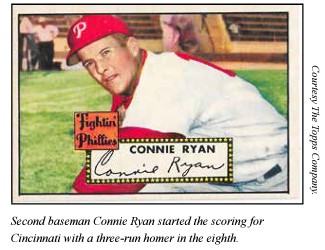 In the days of two eight-team major leagues, “division” meant something quite different from the three regional designations currently used in the National and American Leagues. Back then, fans and writers alike tended to dwell at some length on which teams were in each league’s “first division” – among the top four teams in the standings. To be a “second division club” tended to cast a pall on attendance and was a factor in the first franchise moves of the modern era.1

A monetary incentive was also in play – especially important in the days when many major-league players needed winter jobs to carry them through to spring training. A first-division finish meant the team would receive at least a small share of that season’s World Series net revenue; fifth- through eighth-place teams missed out.2

As the 1951 calendar flipped into June, the Cincinnati Reds, standing sixth in the National League but only 2½ games behind three teams, the Giants, Cubs, and Braves, rolled into Boston for a two-day, three-game series starting with a doubleheader on Sunday, June 3. They won both of those games to pull their record to 21-22, still sixth but only a half-game behind the teams tied for fourth place, the Braves and Cubs, both 22-22. Although it was early in the season, positional jockeying, especially between the first and second divisions, was something that kept fans tuned to their radios, watching the out-of-town scoreboard when in the ballparks, and checking each new edition of their newspapers as games unfolded.

Cincinnati hadn’t finished in the first division since 1944. By comparison, the Braves had enjoyed a post-World War II upswing, finishing fourth in 1946, then third in 1947, then winning the 1948 National League pennant on the strength of strong pitching led by Johnny Sain and Warren Spahn. They had slipped back to fourth place in both 1949 and 1950, but still had five consecutive first-division finishes.

Despite this relative success, the 1951 Braves were drawing poorly in cavernous Braves Field. Just under 10,000 fans had turned out for the Sunday twin bill, and a paltry 1,577 showed up for the Monday afternoon series finale. Spahn and Sain were still bulwarks of the pitching rotation, but neither had appeared thus far in the Cincinnati series.

On Monday afternoon Boston manager Billy Southworth sent 29-year-old righty Max Surkont to the hill.3 Cincinnati’s Luke Sewell countered with another right-hander, Herm Wehmeier. The respective lineups featured a pair of players traded for each other in May 1950. Seven-time NL All-Star catcher Walker Cooper, 36, had come to the Braves in exchange for second baseman Connie Ryan, five years younger.4 After breaking in with the New York Giants for 11 games in 1942, Ryan had played with Boston since 1943, with the 1945 season lost to military service. Except for that absence, he had been the club’s starting second baseman through 1947.

But when Boston acquired Eddie Stanky prior to the 1948 season, Ryan lost his starting role. Then, when Stanky was traded to the Giants two years later, Southworth installed 24-year-old rookie Roy Hartsfield at second base despite an “ultimatum” by Ryan that “if I don’t play regularly, I want to be traded.”5 Ryan was gone on May 10, 1950.

Cooper had the best of it the early going, as he opened the scoring in the Boston second inning with a home run off Wehmeier that scored Bob Elliott. In the fifth, he increased the lead to 3-0 with a run-scoring single, then scored himself when Sid Gordon homered to put Wehmeier further in the hole at 5-0. In the sixth, Sewell replaced Wehmeier with Eddie Erautt; he proved equally ineffective, yielding single runs in the sixth and seventh innings, the last one driven in by pitcher Surkont.

But as the Reds came to bat in the top of the eighth down 7-0, Surkont weakened. He walked Lloyd Merriman and then got an out before Grady Hatton hustled a tap in front of the plate into an infield single. Fate had placed Ryan, batting second in the lineup, next up. He chided Southworth and his former teammates with a three-run homer that, if nothing else at this point, ended Surkont’s shutout bid, making it 7-3, Boston. Boston Globe beat writer Bob Holbrook even trod lightly in his game story: “Still no one was worried about the eventual outcome. This game looked like money in the bank,” as Southworth kept Surkont in the game and he retired Johnny Wyrostek and Ted Kluszewski on fly balls to escape further damage.6

Holbrook, though, took care to add, later in his account: “This game meant too much. It meant the difference between the Braves landing back in third place or winding up in sixth place, behind the Cincinnati Reds.”7

The Braves responded by loading the bases against reliever Bud Byerly in their eighth; the drama included a steal of second base by Cooper – his only one of the season – but Byerly avoided any scoring by getting second baseman Sibbi Sisti to roll out to shortstop to end the half-inning.8

Apparently liking what he had seen for the last two outs of the eighth inning, Southworth sent Surkont out for the ninth. The roof fell in. Surkont allowed two singles and a walk before Southworth pulled him and presented reliever Dick Donovan, pitching in just his 17th major-league game, with a bases-loaded, no-outs situation.

Donovan walked Merriman, delivering Cincinnati’s fourth run. He then threw three balls to pinch-hitter Johnny Pramesa. With the 3-and-0 count Southworth brought in Sid Schacht, who hadn’t reached the majors until age 32 the year before; and even then, it had been with the hapless Browns. Just in from the pen and needing to throw a strike with something on it, Schacht remarkably got Pramesa to pop out in foul ground but then yielded a bases-clearing double to Hatton that tied the score, 7-7.

Ryan walked, then Wyrostek finished Schacht’s day with a single that scored Hatton with the lead run. “Young [26], untried [pitching in his only major-league season]” George Estock was Southworth’s next mound choice.9 He gave up a fly ball to Kluszewski that scored Ryan and a run-scoring single to Virgil Stallcup.10

The Reds’ merry-go-round seven-run, ninth inning put them ahead, 10-7; manager Sewell used Frank Smith to retire Boston’s Buddy Kerr, pinch-hitter Willard Marshall, and Sam Jethroe one, two, three, to wrap up the exhilarating comeback. Byerly got the win. Schacht took the loss for the now-sixth-place Braves.

Reds beat writer Lou Smith caught the early-season essence, noting near the top of his game story that “by defeating the Braves the Reds moved into the first division – a fourth place tie with the Chicago Cubs. They’re only one-half game out of third, now owned by the New York Giants, with whom the Reds Tuesday night open a crucial three-game series.”11

Southworth took criticism from the Boston press. “Many laid the blame for yesterday’s loss smack in the lap of manager Billy Southworth,” wrote Holbrook. “The general opinion was that he fouled up the relief pitching by sending children to do the work of men.”12 At the same time, Ryan, the former Brave, got some praise. “Ryan has blossomed into a fighting, hard-hitting second baseman with the Reds.” Quoting Ryan, the story continued, “With the Reds I’m able to try different things. If they work it’s all right and if they fail no one ever says anything about it.” Sewell chimed in for the Cincinnati press: “Swapping Walker Cooper for Ryan was by far the best deal the Reds have made since I’ve been with them. He’s developed into a ‘take charge guy’ for us on the field.”13

As far as finishes were concerned, 1951 wasn’t a pennant year for either the Reds or Braves. That decision went three days beyond the regular season with the Giants and Dodgers.14

After surging as high as second place on June 9, Cincinnati faded to sixth place at 68-86. Two weeks after this game, Southworth was replaced as Boston manager by Tommy Holmes, who had the club in third place, although 17½ games back, on September 3. The Braves did, however, manage a first-division finish, fourth, at 76-78. Even at two games under .500, they got a piece of the World Series pool revenue. But after a desultory seventh-place finish and average home attendance of only 3,652 in 1952 (they had averaged 6,630 in 1951), they became the first modern-era franchise to relocate – becoming the Milwaukee Braves in 1953.

1 Witness the St. Louis Browns: In 31 American League seasons, commencing with a close second-place finish in 1922, the Browns finished in the first division only eight times through 1953. While most of these were distant third- and fourth-place finishes, the Browns did eke out a wartime pennant in 1944, only to lose the World Series in six games. By 1953 the team finished eighth, 46½ games out of first, drew an average of 3,860 fans for each of their 77 home games, and re-emerged as the Baltimore Orioles for the 1954 season.

2 The total pool for division shares after the 1950 World Series was $486,371 for the four-game Series played that year. (It increased to $560,562 in 1951, when the Series went six games.) Fourth place in the 1950 National League – as well as in the American League – meant a 2½ percent share of the Series pool, or roughly $14,000 for the fourth-place teams (Boston in the NL; Cleveland in the AL) to divide among personnel. Don Drysdale, whose major-league career spanned 1956 through 1969, once remarked, “When we played, World Series checks meant something. Now all they do is screw up your taxes.” World Series Gate Receipts item, Baseball Almanac.com, accessed July 12, 2019.  baseball-almanac.com/ws/wsshares.shtml.

3 Sain had pitched a complete-game win on June 1 and next started on June 5, when he was hit hard over four innings. Spahn started on June 2 but was ineffective and lasted only 1⅔ innings. He started again on June 6 and went all nine innings in a win. Providing even minimal rest for these veterans may have factored into Southworth’s decision not to use either of them in the crucial ninth inning of this game.

4 Cooper made his eighth NL All-Star team as a Brave after the 1950 trade. Ryan had been a wartime NL All-Star selection for Boston in 1944.

8 Over his 18-year major-league career, Cooper stole 18 bases in 29 attempts. Cooper may have “run well for a catcher,” but legendary Pittsburgh broadcaster Bob Prince might have dismissed him as having “larceny in his heart but lead in his feet,” as Cooper made his way around six of the eight National League outposts from 1940 through 1957. Author’s recollection from Prince’s game coverage on KDKA radio, Pittsburgh, circa 1953-1960.

9 Estock was pitching in his ninth major-league game. He had been ineffective two days previously in relief of Spahn against the Cubs.

14 On August 11, 1951, the New York Giants stood 13 games behind the Brooklyn Dodgers, then roared back to finish in a regular-season tie with Brooklyn on September 30. The three-game playoff series that ensued is forever etched in baseball history by Bobby Thomson’s “shot heard ’round the world” home run on October 3 that won the National League pennant for the Giants. Scott Ferkovich, “The Giants Win the Pennant!” SABR Baseball Games Project. sabr.org/gamesproj/game/october-3-1951-giants-win-pennant.