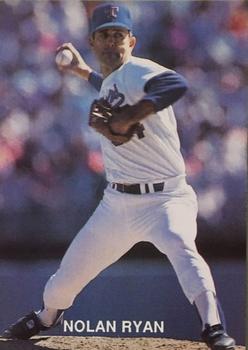 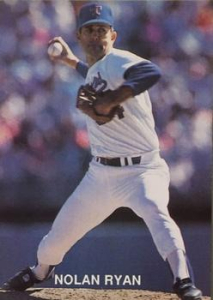 1966, joining the team full-time in 1968. It was the start of a 27-year Hall of Fame career in which he set numerous records for pitching excellence.

In 1990 Ryan was the ace of the Texas Rangers pitching staff and still one of the best pitchers in the game. He won his first four starts of the season convincingly, but his performance deteriorated in May as his 43-year-old body showed signs of wear and tear. When the Detroit Tigers scorched Ryan for five runs in four innings on May 17, the Rangers moved him to the disabled list to evaluate and treat his ailing back. After three weeks of therapy, Ryan was back on the mound on June 6 to face the World Series champion Oakland A’s, whose 34-16 record paced the AL West. When questioned about his health, Ryan said, “I’m not 100 percent but you have to start somewhere.”1

Ryan quickly retired the first two batters, fanning Rickey Henderson on a full count and setting down Carney Langford on a fly ball to left-center. Jose Canseco then connected on a 1-and-1 pitch, driving it 444 feet into the left-field bleachers, the longest in Arlington Stadium so far in 1990. Mark McGwire followed with a strike-out, his first of three against Ryan. In the second inning, Ryan recorded two more strikeouts, against Doug Jennings to open the inning and Walt Weiss to close the frame. In between, he surrendered a home run to Dave Henderson, giving the A’s a 2-0 lead.

Veteran righty Scott Sanderson, in his first AL season after signing with Oakland as a free agent in December 1989, labored in the first but kept the Rangers off the board. He allowed a one-out walk to Geno Petralli, then a double to Rafael Palmeiro after falling behind in the count. With runners on second and third and one out, Sanderson recovered by striking out Harold Baines and retiring Julio Franco on a groundout. The second inning went quickly, as Sanderson retired the Rangers in order.

Struggling with his command to start the third, Ryan allowed the first two runners to reach base. On a 3-and-1 pitch, second baseman Mike Gallego hit a grounder in the hole between shortstop and third base for a single. Henderson followed with a fly ball to deep left. Pete Incaviglia drifted back to the wall but failed to make the catch when he closed his glove too soon. “It was a fly ball. I went back, it hit off my glove,” Incaviglia said. “Just one of those things.”2 Gallego reached third and Henderson second on the two-base error. Facing his first jam of the game, Ryan stiffened, striking out Lansford, giving Canseco an intentional walk, and fanning McGwire. The bases were loaded, but there were two outs. Ryan left a breaking ball over the plate that Jennings dumped into right field, scoring two runs. “It wasn’t a bad pitch, but I don’t know the kid,” Ryan said. “Now that I know him, I probably wouldn’t have thrown him a breaking pitch.” 3Canseco scored the third unearned run on a wild pitch to extend the A’s lead to 5-0.

Sanderson, who had won six of his first eight decisions and entered the game with a 3.07 ERA, failed to take advantage of the five-run lead. Jeff Huson led off the Rangers third with a single, advanced to second on a balk, and scored on a single by Gary Pettis. With one out, Pettis stole second and moved to third on Jamie Quirk’s bad throw. One out later, Baines walked, but the inning ended when Henderson caught Franco’s long fly ball to left field on the back of the warning track.

Both starting pitchers continued to toil in the fourth. Ryan walked two batters but kept the A’s off the board. Sanderson was again in trouble in the bottom of the inning. A single by Ruben Sierra, a wild pitch, and a single by Incaviglia scored the second run. Steve Buechele kept the line moving with another single. Huson’s sacrifice moved the runners up and Incaviglia scored the third run on Pettis’s groundout.

The score remained 5-3 through the fifth inning. At this point, both pitchers were lifted, each having thrown more than 100 pitches. Ryan, assessing his performance after the game said, “I’m just disappointed in the way I pitched. It doesn’t matter whether it’s a physical problem or what, the results weren’t there.”4 A’s manager Tony La Russa, appraising Sanderson’s outing said, “I just thought Scott was being too careful. The game slowed down.”5

The Rangers bullpen held the A’s in check over the last four frames as relief pitchers Jamie Moyer, Brad Arnsberg and Kenny Rogers each pitched 1⅓ scoreless innings. Texas had many scoring opportunities over the last four innings but could muster only one more run. Incaviglia and Pettis both singled in the sixth but were stranded when Mike Stanley grounded out. With one out in the seventh inning, Baines hit a home run off Rick Honeycutt. Sierra then reached on an error by shortstop Weiss, and Incaviglia stroked his third single of the game to put two runners on. Pinch-hitter Kevin Reimer hit a sharp grounder down the third-base line, but Lansford made a brilliant backhand stop, then threw to first for the third out. “It was just instinct,” Lansford said. “That’s a do-or-die play.”6 Huson advanced to third in the eighth on a single, sacrifice, and groundout, but did not score when Palmeiro fouled out for the third out.

Holding a one-run lead in the ninth, La Russa elected to bring in ace reliever Dennis Eckersley to secure the victory. Eckersley thought as he entered, “I’m just thinking I’d better not lose that game. You don’t want to lose any game, but you really don’t want to lose an ugly game like this.”7 Baines led off with a single that ricocheted off Eckersley’s foot. Cecil Espy ran for Baines with instructions to steal second. Franco lined out to right on a two-strike pitch and Sierra flied out to deep right-center on the first pitch thrown to him. Espy was running each time but retreated on each out. When the count reached 0-and-2 on Incaviglia, La Russa called for a pitch out. Espy took off for second, but was thrown out by catcher Terry Steinbach to end the game.

Ryan, describing his performance after the game, said, “Overall I have to be pleased. I had good stuff considering the layoff. But I made some bad pitches and they hurt.”8 Back pain continued to plague Ryan throughout 1990, but he didn’t miss a start the rest of the year. In his next time out, a rematch in Oakland on June 11, Ryan twirled his sixth career no-hitter. He continued to pile up accomplishments in 1990, including his 300th career win on July 31 in Milwaukee. He finished the season with a 13-9 record and a league-leading 232 strikeouts. When Ryan finally retired in 1993, he had 324 wins and a major league-record 5,714 strikeouts.