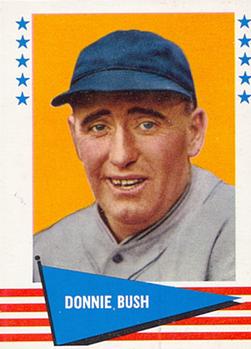 On an overcast Wednesday afternoon, 12,000 fans filed into Detroit’s Navin Field to watch the second game of a four-game series between the Detroit Tigers and New York Yankees. When the Yankees came out of their clubhouse, a cacophony of “derisive cheers of the mob rang.”1

Miller Huggins’s Yankees were favorites to win the American League pennant. Entering his fourth year as manager, Huggins was small in stature, tough: nicknamed Mighty Mite.2 He faced high expectations to win in 1921; Hugh Fullerton wrote that “much criticism has been heaped upon Huggins for his failure to bring his team through last season.”3 The Yankees were 10-8 and in third place, three games behind the first-place Cleveland Indians. While the Tigers were practitioners of the “inside game,” the Yankees relied on the “power game,” with a lineup boasting sluggers Babe Ruth and Bob Meusel. Huggins had a solid rotation headed by Carl Mays. In his first year with the Yankees, this day’s scheduled starter, right-hander Waite Hoyt, “had done nothing of a startling nature” in his first four appearances of the season.4

A product of the Deadball Era, Ty Cobb embraced speed, pitching, and defense. Owner Frank Navin had signed Cobb for $32,500 to serve as player-manager in 1921.5 The baseball establishment doubted Cobb had the temperament to manage. Detroit had no rival as a hitting team, but its starting pitching ranked among the worst. Harry Heilmann led the American League in hitting.6 The Tigers were in fourth place, 12-11 and 3½ games behind the Indians. Rookie right-handed starter Suds Sutherland was going for his fifth win against no losses with two no-decisions. The Tigers were “thirsting for revenge” after losing 2-1 the day before.7

Leading off, the Yankees’ Braggo Roth hit “a screaming double which bounced off the scoreboard” in right field.8 Roger Peckinpaugh’s “watchful waiting policy” drew a walk.9 Sutherland faced the intimidating Ruth with two men on and none out. This “initial introduction to Ruth wasn’t of the sort designed to instill the pitcher with confidence. … The Bambino swung his bat menacingly,” taking his stance and pondering his 10th homer.10 Sutherland hurled a called strike on the first pitch, “compelling [Ruth] to [then] miss two ponderous swings that nearly threw him off his feet” for the strikeout.11 Wally Pipp and Meusel “were so upset by the Bambino’s failure to make it No. 10” that they both flied out to center, ending the inning.12 Hoyt dispatched the Tigers in order in the bottom of the first.

Sutherland gave up a run in the second. With one out, Aaron Ward singled to left, but was forced out by switch hitting Wally Schang’s “easy bounder” to Ralph Young at second.13 Hoyt singled to center, advancing Schang. Roth tormented Sutherland with his second double of the game to left field, and Schang crossed the plate to give the Yankees the lead.

For the Yankees, “this hard earned lead was cancelled in the locals’ half of the round and Hoyt was himself to blame.”14 Bobby Veach singled past first baseman Pipp into right. Heilmann’s bat “got a Texas leaguer into right.”15 With Lu Blue at the plate, Hoyt saw Veach wander off the bag, but made a “bad throw to catch Veach napping off second,” and “both runners advanced a peg on the miscue.”16 Blue struck out, but Joe Sargent came through with a long sacrifice fly to Roth in center field, scoring Veach with an unearned run.

Ruth led off the Yankees’ third with a double to right-center and advanced to third on Pipp’s sacrifice. With two outs, Ruth attempted to steal home while “Sutherland was winding and unwinding” – but was tagged out by catcher Eddie Ainsmith.17 Home-plate umpire George Moriarty indicated after the game that Ruth had made the right decision, failing because of “the execution faulty in the mere detail of failing to touch the base.”18 “The Babe, muttering maledictions on the heads of all,” trudged off to his position in left.19

The sixth saw Ruth try to stretch a single to center into a double “but over-estimated his speed on the towpath.”20 To those watching, “Cobb seemed to loaf in retrieving the ball.”21 Ruth attempted “to take advantage of the Tiger leader’s dilatory tactics.”22 Cobb anticipated this and “whipped the ball to Donie] Bush in time to nail the Sultan of Swat at second base.”23

After allowing two hits in the third, Hoyt controlled the Tigers’ bats, retiring 12 in a row until Detroit threatened with three singles in the seventh. With two outs, Blue and Sargent singled. Ainsmith “followed the laudable examples of his fellows[,]” stroking a single to right.24 Blue rounded third. Meusel “leaped in and picked up the bounding leather”; his throw home nipped the sliding Blue “by three feet.”25

With one out in the Yankees’ eighth, Roth singled to left for his third hit. Huggins called for the hit-and-run. Peckinpaugh lined to Sargent. Roth “was digging his way down to second and could not get back in time.”26 “Roth was caught so far off first that Ainsmith cantered down to first,” receiving Sargent’s throw to double up Roth, ending the inning and preserving the tie.27

The game headed to the bottom of the eighth. For several innings, the teams had “battle[d] tooth and nail to earn the decisive run but neither side had been successful.”28 With two outs in the Tigers’ eighth, it appeared “the fracas might be continued indefinitely.”29

What followed was “the beginning of a comedy of errors that would have shocked Shakespeare.”30 Tigers shortstop Bush was “a firm believer in the old saying about never-say-die for he spanked a single to center.”31 Manager Cobb signaled the hit-and-run to player Cobb and Bush. As Hoyt delivered the pitch, “Bush dashed for second as Tyrus lammed [sic] one of Hoyt’s shoots to centre field,” with Bush ending up at third.32

Cobb then devised a play “planned with brutal intent by the Georgian. …”33 With Veach up, “Ty instructed Chick Shorten, who was coaching the initial [at first base],” for Veach to bluff at a Hoyt pitch and Bush to run.34 Veach faked. Yankees catcher Schang “lined the ball to Ward” at second when “Cobb went for second lickety-split.”35 Bush broke for home, “tearing madly for the plate.”36 Cobb “in the meantime retraced his steps and got back to first,” bluffing the steal.37 It appeared to be an easy play at home “had not Ward foozled the ball and proceeded to kick it around.”38 Bush slid safely home with the go-ahead run.

Cobb was not done proceeding “to cut a few more capers that had entire Yankee team doing jig-saw around the diamond.”39 He “pilfered the midway,” aggressively rounding the bag.40 Schang dropped the Hoyt pitch retrieving the ball and threw it to at third, who dropped the toss. Cobb “slid back safely into second when Ward muffed Baker’s relay.”41 Hoyt walked Veach. Heillman grounded to Ward, forcing Veach to end the inning, with the Tigers ahead, 2-1.42

The Yankees posed no threat in the top of the ninth. Sutherland retired Ruth, Pipp, and Meusel to end the game, a Tigers victory after 1 hour 38 minutes of play.

Hoyt deserved a better outcome, scattering nine hits with one earned run in an eight-inning complete-game loss. “The Flatbush Kid pitched a bang-up game,” but the Yankees’ defense “cracked wide open in the eighth and put on a carnival of muffing.”43 Ruth’s base running escapades didn’t help.

Sutherland won his fifth game allowing one run on seven hits, with three strikeouts and one walk. After a tough first three innings, Sutherland “settled down to real pitching after the fourth and was invincible.”44 There were “situations when a blow from the bat of ‘Babe’ Ruth’” may have resulted in a loss.45 Little did Sutherland know this was the pinnacle of his three-month major-league career, which would end in June after a confrontation with Cobb over how to pitch to Ruth in a subsequent Tigers-Yankees game.46

The Tigers leapt into second place with Yankees and Senators losses. The Yankees dropped to fifth. At season’s end, the proper balance of power was back in order. The Yankees finished in first place with a record of 98-55, 4½ games ahead of the 1920 World Series champs Indians and 27 games ahead of the Tigers, who ended in sixth place at 71-82. The Yankees lost the 1921 World Series to their landlords at the Polo Grounds, the Giants. Ruth dominated with 59 homers, 171 RBIs, and a .378 batting average. Hoyt finished the year 19-13 with a 3.09 ERA and a career-high 282⅓ innings pitched. The Tigers set American League records for team batting average and hits.47 Pitching was their Achilles’ heel, with an abysmal team ERA of 4.40.

Despite scoring the winning run, Bush knew his skills were diminishing. There was a noticeable drop-off in his range at short and his speed was receding. He was built to play Cobb’s style but Cobb saw the need to rebuild. Bush, batting a milquetoast .281, was placed on waivers on August 20, 1921, after 13 seasons with the team.48

2 Ralph Davis, “Huggins Not Appreciated: Dead Manager of New York Yankees Was Quiet and Unobtrusive, Keeping Himself Out of the Spotlight,” Pittsburgh Press, September 26, 1929: 32.

42 “Yankees, Tricked by Tyrus Raymond, Lose to Tigers”; “Cobb’s Bluff Steal Draws Error That Beats That Beats the Yanks”; Retrosheet.org and Baseball-Reference.com in their play-by-play summary of the game, indicate “Heilmann out on an unknown play” and “Batted the ball; Unknown out on the play” respectively to describe the last out of the bottom of the eighth. The Daily News’s and New York Herald’s game coverage noted that Heilmann grounded to Ward, who forced Veach at second to end the inning.

46 For more on Sutherland’s short stint in the big leagues, see his SABR bio: Ed Bartholemy, Society for American Baseball Research: https://sabr.org/bioproj/person/suds-sutherland/; Sutherland was traded back to the Portland Beavers of the Pacific Coast League, from whom the Tigers had signed him.

48 Harry Bullion, “Donie Bush Will Leave Tigers by Waiver Route: Service of Thirteen Years in Tiger Spangles Is at End; Midget Might Land with Some Other Club in American League; Donie’s Friends Certain to Express Regrets at His Departure,” Detroit Free Press, August 18, 1921: 13. Bush was picked up by the Washington Senators and played with them until 1923. As player/manager, Bush led the 1923 Senators to a fourth-place finish and a 75-78 record.