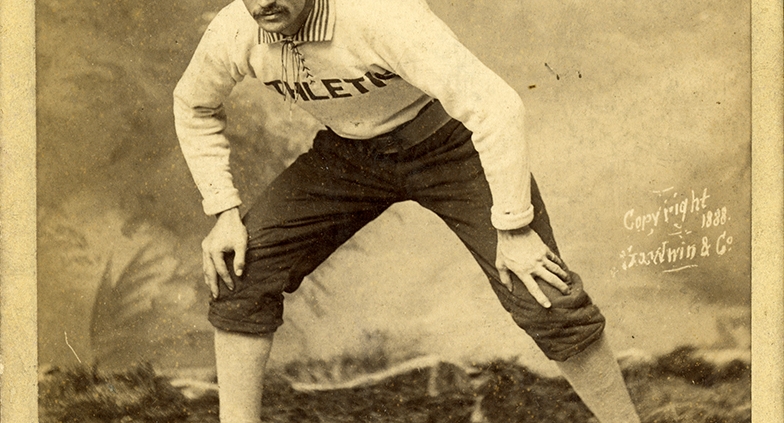 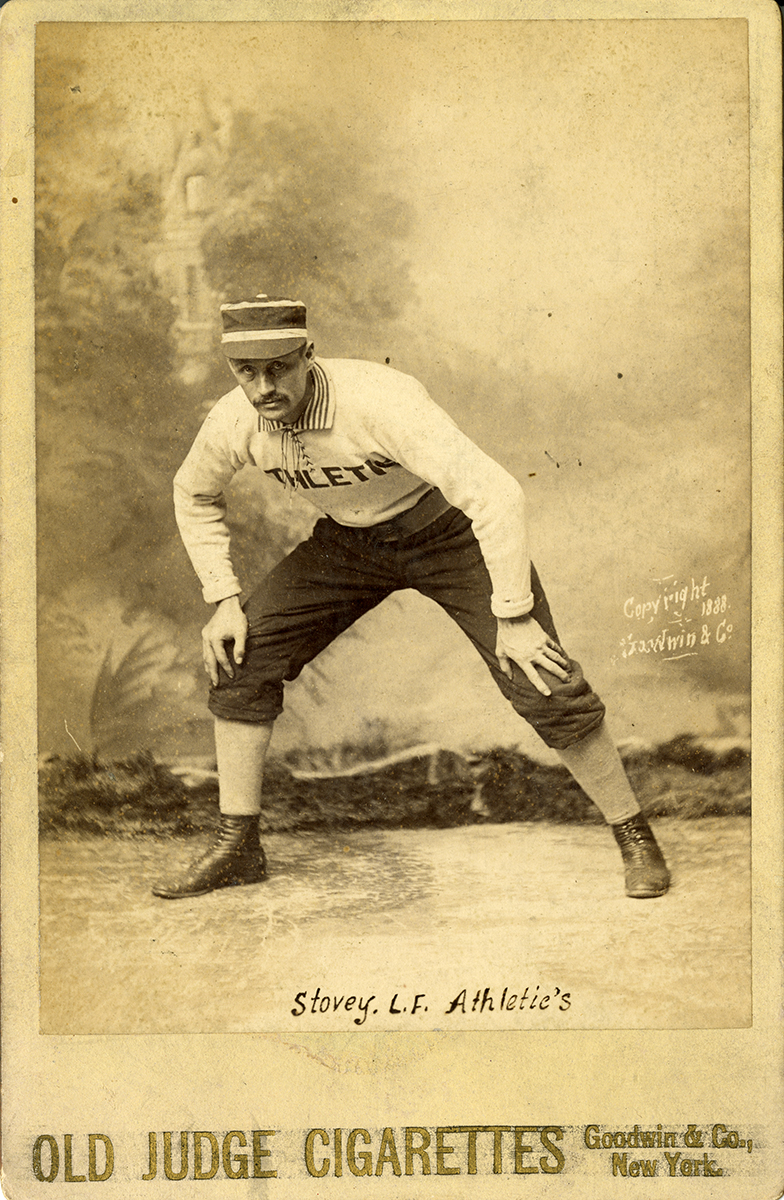 Harry Stovey had the power to lead his league in home runs five times and the speed to lead the league in triples four times. Using that power and speed combination, Stovey hit for the first major-league cycle of the 1888 season in the Philadelphia Athletics’ 12-3 American Association win over the Baltimore Orioles on May 15.

It was a breezy afternoon, with temperatures in the low 60s, for the opener of the three-game series at Philadelphia’s Jefferson Street Grounds.1 The Athletics entered play losers of four consecutive games and eight of their last nine, while the Orioles had won three of their last four.

The pitching matchup featured two talented young hurlers — 21-year-old Baltimore left-hander Matt Kilroy versus 21-year-old Philadelphia righty Gus Weyhing. Kilroy was one of the American Association’s best pitchers in the two previous seasons. He struck out 513 batters in 1886, still a single-season major-league record, and his 46 wins in 1887 led the major leagues that year. But Kilroy didn’t match that standard in 1888, posting a 17-21 record and a 4.04 ERA.

Weyhing was in his second major-league season and it was one of his best. He had a 2.25 ERA for the season and pitched a no-hitter on July 31 against the Kansas City Cowboys. Weyhing hit a league-leading 42 batters that year; he still holds the major-league record with 277 batters plunked in his career.

“King of Umpires” John Gaffney was the lone umpire for the game. It was Gaffney’s first season back umpiring after spending 1886 and 1887 as manager of the National League’s Washington Nationals. Gaffney had previously umpired in the NL in 1884 and 1885.

After a scoreless top of the first inning, the Athletics brought home four runs in the bottom of the first. The rally included a triple by Stovey that rolled to the center-field flagpole. It was one of Stovey’s major-league-leading 20 triples that season.

The Orioles scored twice in the second to cut the lead to 4-2, but three runs by the Athletics in the bottom of the third gave Philadelphia a comfortable 7-2 advantage. At some point between the second and sixth innings, Stovey recorded his second hit of the game, a double off the left-field fence; newspaper accounts of this game do not specify the inning.

With the Athletics leading 7-3 in the bottom of the seventh, Stovey pulled a home run over the left-field fence for his third hit of the day. It was Stovey’s fourth homer of the season and the 65th of his career, the second most in the major leagues at the time. Stovey passed future Hall of Famer Dan Brouthers for the career home-run lead in 1889 and held the record until Hall of Famer Roger Connor passed him in 1895.2 Philadelphia scored four runs in the bottom of the seventh to increase its lead to 11-3.

Stovey came up in the bottom of the eighth needing only a single for the cycle. Facing the starter Kilroy, Stovey grounded “a daisy-cutter over second base” for the cycle-clinching hit.3 It was the only cycle of Stovey’s career, the 20th cycle in major-league history, and the fourth American Association cycle by an Athletics player.4

There was another American Association cycle less than a month after Stovey’s. Kansas City’s Sam Barkley pulled it off on June 13 in a loss to Cincinnati. The next cycle at the Jefferson Street Grounds was achieved by Louisville’s Pete Browning on June 7, 1889, in a 9-7 loss to the Athletics.

The Athletics piled up 15 hits against Kilroy in their 12-3 win. According to local newspaper coverage, the Athletics met Kilroy’s curveballs with such success that it “set the crowd wild with delight.”5 Philadelphia’s Times noted that “Kilroy is no longer a terror to the Athletics,”6 while the Philadelphia Inquirer’s headline stated, “Kilroy Hit Hard — The Athletics Pound Him All Over the Field.”7 Bill Gleason, Henry Larkin, Curt Welch, and Weyhing also had multiple hits for Philadelphia.

Weyhing allowed only three hits, all singles, and struck out nine in his complete-game victory. He hit three batters and threw a wild pitch. Reporting indicated that both teams played smooth defense: “Both pitchers were backed up in almost faultless style, and brilliant field plays were frequent.”8

The crowd of 800 people “cheered themselves hoarse for nearly two hours.”9 The game took 1 hour and 50 minutes to complete. Philadelphia’s Times punctuated its recap of Stovey’s performance with a simple and true analysis: “Stovey had his eye on the ball.”10 The Times also opined that “[t]here was never a more satisfactory game to a home crowd than that which the Athletics won from Baltimore yesterday by a score of 12 to 3.”11

The Athletics went on to finish 81-52 with three ties in 1888, placing third, 10 games behind the pennant-winning St. Louis Browns. Baltimore finished in fifth place with a 57-80 record, 36 games out of first.

Stovey played in 130 games for Philadelphia in 1888 and batted .287. He stayed with his hometown Athletics in 1889 and led the American Association in runs, home runs, RBIs, slugging percentage, and total bases. He continued playing in the major leagues until 1893 and compiled 1,775 hits and 122 home runs in his 14-year major-league career. He was third on the all-time home-run list as recently as 1920.

Stovey later became the player-manager of the minor-league club in his wife’s hometown of New Bedford, Massachusetts. He retired from professional baseball in 1895 and became a New Bedford police officer. He was promoted to captain of the New Bedford Police Department in 1915, a job he held until he retired from the police force in 1923. Stovey died in New Bedford in 1937 and is buried there.12