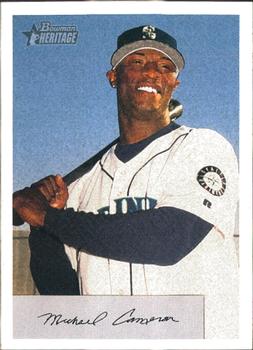 Mike Cameron and the Seattle Mariners hoped to salvage a win in the final game of their series with the Chicago White Sox. The Mariners still had an American League-leading 18-9 record and remained two games in front of the Oakland A’s in the AL West Division. The White Sox had grabbed the Central Division lead on April 23 with a win over Cleveland. Coming into this game they held a half-game lead over the Minnesota Twins.

Cameron entered the game in a slump, having batted just .108 in his past 11 games with just one RBI. He hadn’t homered since April 15, when his sixth-inning blast gave Seattle the lead in a 13-11 win over the Texas Rangers.

Cameron was facing the team that gave him his start. The White Sox selected him in the 18th round of the 1991 draft and he made the team in 1995. But Chicago traded Cameron to Cincinnati on November 11, 1998, for Paul Konerko, who would become a star for the White Sox in coming years. After the 1999 season, Cameron was traded for a franchise player again. This time he was sent to the Mariners along with three others for Ken Griffey Jr.

Rookie Jon Rauch started for the White Sox. It was the right-hander’s third start and he was still looking for his first win. In his previous appearance, he had not lasted five innings and entered this game with a 6.91 ERA.

The game started ominously for Rauch: He hit Ichiro Suzuki on the first pitch. Bret Boone, next up, had been moved up in the batting order by manager Lou Piniella to try to get him out of a slump. It worked. Boone hit Rauch’s first pitch over the right-field fence and the Mariners were up 2-0. Cameron followed Boone and four pitches later hit one over the center-field wall for the third Mariners run of the inning.

Jim Parque replaced Rauch. The southpaw got Suzuki to ground out but another run crossed the plate. Boone then went deep again, hitting Parque’s first pitch for his second two-run homer of the inning and putting the Mariners ahead 9-0.

Cameron then stepped up to bat and after working the count full, he sent the ball over the center-field fence again for the 10th Seattle run. It was the first time in the major leagues that two teammates each hit two home runs in the same inning. Cameron called the back-to-back homers “a thing of beauty.”1

Parque pitched a scoreless second inning and appeared to be on the way to another one in the third. Suzuki grounded out to second and Boone struck out on three pitches. But Cameron knocked Parque’s second pitch over the left-field fence to give the Mariners an 11-run lead. Olerud then singled and Sierra doubled for another run.

James Baldwin started for Seattle. The righty entered the game with a 2-1 record. After starting the season with two straight wins and giving up just two earned runs, he had struggled in late April. Over his past three starts, he had given up 16 earned runs to see his ERA balloon to 5.46.

Baldwin started out well. He got the White Sox out in order in the first and gave up a two-out single in the second. But he got in trouble in the third before Cameron bailed him out with “one of his trademark defensive gems.”2 After Baldwin surrendered a single to Royce Clayton and walked Kenny Lofton and Frank Thomas, Magglio Ordonez hit a pitch to deep center field. Cameron “reached high above the center field wall to rob Ordonez of what would have been a grand slam.”3

The White Sox got on the scoreboard in the fourth when Carlos Lee hit a solo home run. They added a second run in the fifth when Clayton hit a leadoff home run. Although they added two more runs in the seventh, it was not enough to surmount the Mariners’ lead.

With three home runs under his belt, Cameron came to bat in the fifth with two outs. On the fourth pitch from Parque, the center fielder hit his fourth home run of the game, once again over Comiskey Park’s center-field wall. “As his fourth shot soared to center, a loud ‘Ohhhh!’ went up from the crowd. [Cameron] rounded the bases wearing a big grin, and slapped hands with third base coach Dave Myers,” wrote an observer.4

Cameron told reporters later that he couldn’t explain his sudden burst of power. “I told the guys on the bench, I don’t know, I’m just putting a good swing on the ball,” he said.5 White Sox manager Jerry Manuel was more congratulatory, saying, “Mike put on a pretty good show. You have to applaud the young man. You have to be excited for Mike. He’s a tremendous young man. He gave us everything he had when he was here.”6

The blast put Cameron in the history books as the 13th major leaguer — and just the fourth American Leaguer — to hit four home runs in a game. Rocky Colavito was the last American Leaguer to do it when his four home runs helped to beat the Orioles, 11-8, on June 10, 1959. The last player before Cameron to hit four in one game was Mark Whiten of the Cardinals in 1993.

Boone said after the game, “I’ve hit three in a game twice. There’s a big difference between hitting four and hitting three. It’s probably something that I’ll never ever see live again.” Manager Piniella said that Cameron “had a heck of a night. It couldn’t have happened to a nicer guy.”7

Two innings later, Cameron came to bat again and had a chance to put himself in the record books as the only player to hit five home runs in a game. But he was hit by a pitch. He came to bat once more, in the ninth. Facing Mike Porzio, who had relieved Parque, Cameron worked the count to 2-and-2. Then he lined the ball to deep right field but right fielder Jeff Liefer made a running catch for the out.

“I tried to go for it because I don’t think the guys would have been happy if I didn’t try,” he said after the game. “I hit it well enough but not high enough to go over the fence. I really wanted to make it happen, but I didn’t want to swing at that 3-and-0 pitch, because I didn’t want to make my team look bad. But I think if I did swing at it, it would have been gone. I just know it.”8

In the locker room after the game, “[H]is teammates made a shrine in front of his locker. A white towel with 4s written on it in black marker hung over the back and a cardboard crown with ‘King Cam 5-2-02’ rested on it. A red towel lay on the seat, with four baseballs, a cigar, and Michael Jackson’s greatest hits on top of it.”9

Cameron told reporters, “It’s very special. I’m still living the moment. I guess there’s another asterisk that goes by my name now. Being traded for [Ken Griffey] Junior and now this. I feel like the king of the hill today. And it couldn’t have happened at a better place.” Cameron said, acknowledging that the game was in Chicago, home of the White Sox, where he had gotten his start.10

Reflecting on the game in 2020, Cameron said “The crazy thing is, I tried to duplicate it the next day in New York. That didn’t work.” Instead, Cameron went 0-for-4 in that next game, at Yankee Stadium.11