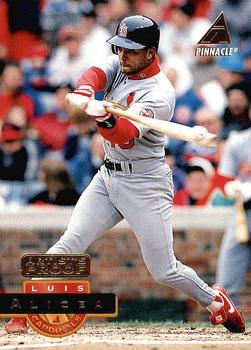 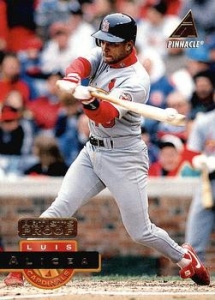 The French have a term, jolie laide, that is typically used to describe a woman who is beautiful despite features that are otherwise. In the context of a baseball game, the events of May 22, 1994, at Joe Robbie Stadium can be described as jolie laide. The St. Louis Cardinals and Florida Marlins were ugly … very ugly, yet the result was stunning.

This was a Sunday-afternoon game between two teams hovering around the .500 mark, on the fringes of contention in baseball’s first season with both leagues realigned into three divisions. The Cardinals were 22-18 and, according to St. Louis’s third baseman, Stan Royer, “had some momentum going into that game,”1 having won four straight — including the first two of the three-game set. The Marlins, 22-20 in their second season after debuting as an expansion franchise in 1993, were looking to salvage the series finale.

The slated starting pitchers were the Cardinals’ 1991 first-round draft pick (21st overall), Allen Watson, and Marlin David Weathers, who was in his fourth season of what turned out to be a 19-year career. A New York Institute of Technology product, Watson had debuted in the majors in July 1993 but struggled to start the ’94 season, carrying 2 wins and 2 losses with a 6.70 ERA in eight starts. He arrived late to the pregame with an excuse, and Cardinals manager Joe Torre allowed the 23-year-old lefty to keep the start. Weathers, in the Marlins rotation to begin the season after a stint in 1993, held a 5-2 record and 2.53 ERA through eight starts of his own.

Ray Lankford’s leadoff triple began the game in emphatic fashion. He scored on Todd Zeile’s sacrifice fly for a 1-0 Cardinals lead. The Marlins answered in the bottom half of the first when Orestes Destrade doubled in Benito Santiago and Jeff Conine. But that lead lasted only half an inning, until the Cardinals tallied the tying run with a double by Luis Alicea that scored Jose Oquendo.

With the score tied, 2-2, the ugliness commenced in the bottom half of the second inning. Watson walked opposing pitcher Weathers, and subsequently allowed a two-run homer to Carl Everett — the first of the 22-year-old center fielder’s career. Rich Renteria made it back-to-back homers, and the Marlins suddenly had a 5-2 advantage.

The Marlins attack continued. Watson walked Santiago and allowed his third home run of the inning when Conine went deep, increasing Florida’s lead to 7-2. All three homers were to deep left field.

Soon after Conine touched home, Watson marked Destrade for an intentional hit by pitch to his back. Destrade — a native of Cuba who had grown up in Miami and returned from a four-year stint in Japan to join the Marlins in 1993 — immediately charged the mound. Watson chucked his glove at Destrade, hitting him across the face. It knocked off Destrade’s glasses and caused a cut on his nose.

Destrade continued at Watson and landed punches to Watson’s head. Their teammates joined the melee. Florida’s Luis Aquino and St. Louis’s Bernard Gilkey found each other throwing punches. Umpire Charlie Reliford was inadvertently on the receiving end of a swing by Gilkey.

After the fracas settled and the teams returned to their benches, home-plate umpire Larry Vanover ejected Destrade, Watson, Aquino, and Gilkey. Torre continued the game under protest. “… if I take one of my starting pitchers and go out and pick a fight with another team’s regulars, how is that fair?” Torre grumbled.2

With order restored, Torre called on former Marlin Rich Rodriguez for long relief. He answered the call with 3⅔ scoreless innings — but not without incident. Between innings, a fan by the visiting dugout tossed beer on Rodriguez. The left-hander, who had been released by the Marlins in the spring, threw his glove at the fan in Watson-esque fashion. Surprisingly, someone tossed the glove back, which caused Rodriguez to later joke, “Nice to know they’re not all against me.”3 He added an endearing explanation for Cardinals’ owner and brewer, Anheuser-Busch: “It wasn’t an Anheuser-Busch product. That’s what got me upset.”4

Weathers held the 7-2 lead until the sixth, when the Cardinals surged for four runs. Alicea followed Lankford’s one-out walk with an RBI triple, and Gregg Jefferies singled Alicea home. Marlins manager Rene Lachemann went to Richie Lewis in relief, but Gerónimo Peña capped the rally with a two-out, two-run homer to right field. The five-run Marlin lead was now only one run.

As they did earlier in the game, the Marlins had an answer in the bottom of the inning. This time it was two runs off reliever John Habyan from hits by Renteria, Santiago, Matias Carrillo, and Kurt Abbott.

Effective bullpen work kept the score 9-6 until the ninth. Florida’s Jeremy Hernandez had recorded the final out of the eighth after relieving Lewis, and he returned in the ninth to close out the game. After Brian Jordan led off with a walk, he was doubled up when Terry McGriff lined out.

Trailing by three with two outs in the ninth, the Cardinals, having won the first two games, may have started to turn their attention toward the flight to Philadelphia later in the day. Similarly, the Marlins might have let their minds wander to hosting the Montreal Expos the next day. But wait …

Oquendo walked and took second on a wild pitch.

Pinch-hitter Mark Whiten doubled against the wall in right, driving in Oquendo to cut Florida’s advantage to 9-7.

Lankford singled to right. Whiten scored, and the Marlins’ lead was down to one run.

Alicea singled between the shortstop and second base — his fifth hit of the game.

Jefferies, who was nursing an injured left thumb, slashed a double to right, landing it on the chalk line. Lankford and Alicea came home with the tying and go-ahead runs.

Five consecutive Cardinals reached safely with two outs, four runs had scored, and St. Louis had a 10-9 lead. Mike Pérez closed out the Marlins in the ninth to cap an improbable win, likely shocking the 35,386 in attendance. “I haven’t seen this team this excited all year,” Jefferies commented after the game. “I came in here and guys were jumping around like we won a playoff game.”5

Hernandez, the losing pitcher, could hardly explain it, “I have no words to describe how bad an outing that was — just horrible.”6 Lachemann added, “We were going to live or die with him until we went under.”7

Cardinals southpaw Rob Murphy benefited from the offensive outburst to earn the win after two scoreless innings in relief. “I really enjoyed playing in Miami, my hometown,” Murphy recounted. “I was not trying to do anything fancy. It was awesome … a great win. Our guys scored four runs in the ninth to give us the win! It certainly made my postgame visit with friends a lot of fun.”8

The second-inning brawl rivaled the ninth-inning rally as a postgame topic of conversation. NL President Leonard Coleman had informed teams the previous week that instigating fights would result in a suspension. With a roster already hampered by injuries, Marlins general manager Dave Dombrowski voiced his frustration with Destrade after the game, “I respect a player’s ability to do what he feels he needs to do, but I don’t understand that the automatic reaction is to charge the mound when the [league] president said you’re going to be suspended if you do so.”9

Destrade and Watson resumed their battle after the game with words — perhaps fueled by postgame reporters. “He’s basically a wimpy little gutless college boy,” Destrade asserted. “He was just trying to make up for him stinking.”

“Wimp?” Watson responded. “I was telling him to come out. I charged him, too. I don’t think that’s being a wimp.” About throwing his glove, Watson added, “He has a helmet he could throw, and a bat. I just reacted. I didn’t run away. He’s a wimp for saying that.”10

The NL apportioned blame between the two principals: Watson received an eight-game suspension, and Destrade four games. Gilkey’s punching of home-plate umpire Reliford — though inadvertent — also drew a four-game suspension. The 1994 season continued until August 11, when a players strike shut down the major leagues. St. Louis finished the truncated schedule tied for third in the NL Central; Florida came in fifth in the NL East.