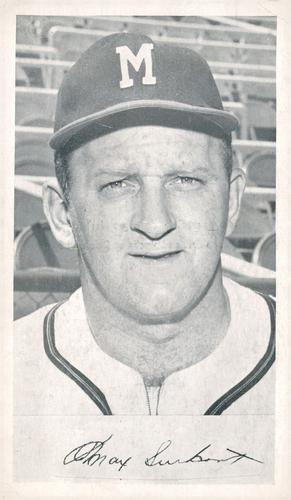 Many pitchers in baseball history have been associated with strikeouts. Christy Mathewson, Grover Cleveland Alexander, Rube Waddell, Walter Johnson, Dazzy Vance, Bob Feller, Lefty Grove, and Sandy Koufax are well known because of their strikeout prowess. Max Surkont belongs on this list, despite his obscurity today. His amazing performance in the second game on May 25, 1953, for the Milwaukee Braves against the Cincinnati Reds put him on an exclusive list of strikeout kings for almost 17 years. On that rainy day, he set the modern major-league record for consecutive strikeouts, and he twice had to battle the elements to make sure that his record would stand. Not only was there a rain delay after his seventh consecutive strikeout, but after his record-setting eighth strikeout, another rain delay threatened to erase the game before it became official. Though Surkont’s record was tied three times in the 1960s, it stood until April 22, 1970, when Tom Seaver struck out 10 in a row.1

Mickey Welch of the New York Giants on August 28, 1884, did strike out nine straight batters, and Charlie Buffinton of Boston five days later struck out eight consecutive batters, as did Ed Cushman of the New York Metropolitans on September 16, 1885.2 However, these feats were accomplished before the pitching rubber was moved back to 60 feet 6 inches from home plate. Max broke the record of seven in a row set by Hooks Wiltse of the New York Giants on May 15, 1906, which was equaled by Dazzy Vance of Brooklyn on August 1, 1924 and Van Lingle Mungo of Brooklyn on June 25, 1936.3

Max Surkont was a highly unlikely man to be a strikeout record setter. Originally signed by the St. Louis Cardinals in 1938, he did not make the majors until April 19, 1949, after the Chicago White Sox had drafted him from the Cardinals. He was available because St. Louis had optioned him out three times.4 Actually, the Cardinals sold Surkont with Ray Sanders to the Boston Braves on April 16, 1946, but he was returned by Boston and sent to Rochester May 4, 1946.5 After a lackluster 1949 season (3-5 record with a 4.78 ERA), Surkont was back in the minors until the White Sox traded him to the Boston Braves for minor leaguer Glenn Elliott.

Surkont’s seasonal strikeouts were not that impressive once he left the lower minor leagues. He did lead the Mid-Atlantic League (Class C) in 1939 with 193 strikeouts while pitching 218 innings and the Three-I League (Class B) in 1940 with 212 punchouts in 234 innings. But in Double-A and Triple-A ball, the best Surkont did was 159 strikeouts in 255 innings. In the majors, in 1952, he had a career-high 125 strikeouts in 215 innings.6 Only once besides this day did he ever have more than nine strikeouts in a game (11) and as it happened it also was against the Reds (June 2, 1952).

On May 25, 1953, the Reds and the Braves played a twi-night doubleheader at County Stadium in Milwaukee. Behind Don Liddle’s three-hitter, the Braves won the first game, 5-1. Surkont started the second game against Harry Perkowski, and it soon became one-sided. Cincinnati quickly went down 1-2-3 in the first as Rocky Bridges struck out, and both Bobby Adams and Gus Bell grounded out. The Braves started their half of the inning with back-to-back singles by Billy Bruton and Johnny Logan. Eddie Mathews followed with  a home run to give the Braves a quick 3-0 lead. Then Sid Gordon doubled, Andy Pafko walked, and Joe Adcock tripled, driving in two more runs. Herm Wehmeier relieved and got Jack Dittmer to strike out, and Walker Cooper to fly out, as Adcock scored the sixth run. Surkont then grounded out to end the inning.

In the second inning, former New York Giants all-star Willard Marshall singled and Bob Borkowski doubled him to third. Grady Hatton grounded to first, as Marshall scored and Borkowski advanced to third. Hobie Landrith walked but Roy McMillan popped out to second and Wehmeier struck out to end the inning. The pitcher striking out wouldn’t have seemed unusual; it’s safe to assume that no one in County Stadium realized the significance of that strikeout.

In the bottom of the third Gordon tripled and scored on Pafko’s fly to Bell, making the score 7-1. Although Adcock doubled, Dittmer and Cooper made easy outs. In the Reds’ top of the fourth, Marshall and Borkowski struck out. While Hatton was at bat, umpire Bob Engeln signaled that play was suspended due to rain, but he was overruled by Bill Stewart, umpire-in-chief.7 Play was halted after Hatton struck out for the seventh consecutive strikeout. Surkont had tied the modern major-league record. The rain delay lasted 40 minutes.8

When play was resumed, Milwaukee padded its lead in the bottom of the fourth. After Surkont struck out, Bruton doubled and scored on Logan’s single to make the score 8-1. Then Mathews hit another home run and increased the lead to 10-1.

In the Reds’ fifth, Andy Seminick, who had replace Landrith, was called out on strikes for Surkont’s eighth straight strikeout. Then plate umpire Engeln decided that a second downpour called for another rain delay. Milwaukee manager Charlie Grimm argued with him again, and again Bill Stewart overruled his colleague. Batting with two strikes, McMillan lined to Logan to end the streak. More importantly, pinch-hitter Bob Marquis then grounded to Adcock at first base. This ended the top of the fifth inning and made it an official game.9  At that point the game was delayed again for 30 minutes.10

After the second rain delay, the Braves were scoreless in the fifth although Walker Cooper had a single. Bridges led off the sixth with a strikeout (Surkont’s 10th of the game), but after an Adams walk, Bell and Marshall flied out. Milwaukee did not score in its half of the sixth. Borkowski fouled out for Cincinnati in their seventh, then Hatton struck out (number 11 for Surkont) and Seminick popped to second. The Braves went down 1-2-3 in their seventh.

In the ninth Adams grounded out to Logan, but Bell singled. An out later Borkowski homered. Hatton singled but Seminick flied out to end the game. Until the ninth, Surkont had given the Reds only two hits (both in the second inning). This 10-3 victory gave him a 6-0 start.

Surkont attributed the strikeouts to the fact that “‘My fast ball really was jumping,’ I got tired in the eighth inning. After all, it was my first start in ten days.’”11

Surkont said surprisingly that this was not his biggest thrill in baseball. He felt that came in 1949, with the White Sox. “I relieved Billy Pierce in the first inning in Yankee Stadium,” he recalled, “and held the Yanks to four hits in beating them. You know — that’s almost every youngster’s ambition — to pitch and win there.”12