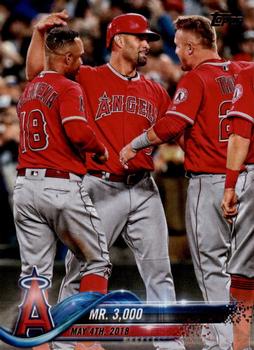 Jose Alberto Pujols took the big leagues by storm when he debuted for the St. Louis Cardinals at age 21 in 2001. Born in the Dominican Republic, Pujols had moved to the United States as a teenager, graduated from high school early, earned junior-college All-America honors, and reached the majors less than two years after the Cardinals selected him in the 13th round of the June 1999 draft. As a rookie he batted .329 with 37 home runs, 194 hits, and 130 RBIs, resulting in an All-Star Game appearance, a Silver Slugger Award, and National League Rookie of the Year honors.

It was the start of as good a decade of baseball as any player in the game’s history has had. In nine seasons from 2002 through 2010, Pujols won three National League MVP awards (2005, 2008, 2009), finished second in the MVP voting four times, and finished third once.

The 6-foot-3, 235-pound Pujols demonstrated prodigious power in St. Louis, hammering 408 home runs from 2001 through 2010, which made him the only major leaguer to hit more than 400 homers in his first decade. In addition to the power, he also hit for average. Pujols’ 212 safeties in 2003 led the league, and he finished in the NL’s Top 10 in hits nine times in his first 11 seasons.

Pujols’ contract with the Cardinals expired at the end of the 2011 season, which he capped by leading St. Louis to a World Series title, its second during his time with St. Louis. In spite of 11 great years with the franchise, however, the slugger and the team could not come to terms for 2012. He instead signed a $240 million, 10-year deal with the Los Angeles Angels.2

But Pujols was not as productive as an Angel as he had been with the Cardinals, nor were his teams as successful. By 2013 his OPS, which had topped 1.000 eight times during his St. Louis tenure, had dropped below .800 for the first time in his career, never to return. Even when paired with Mike Trout, who received the first of his three American League MVP Awards in 2014, Pujols’ only postseason experience with the Angels was a three-game sweep by the Kansas City Royals in the 2014 Division Series.

Nevertheless, Pujols continued toward another milestone. At the start of the 2018 season, now 38 years old, he was just 32 hits short of becoming the 32nd major leaguer with 3,000 hits.

After getting 28 hits in April of 2018, Pujols needed four more during the first three days of May to reach his 3,000th in front of his home fans. He had two hits, including his 620th career home run, in a win over the Baltimore Orioles on May 2. A day later, in his final chance before the Angels went on the road, Pujols hit a two-run double in the second inning but was unable to produce a hit in three more at-bats.

This left him sitting on 2,999 hits when the Angels visited the Seattle Mariners on May 4. The Mariners’ largest crowd of the season since Opening Night, 41,705 fans, attended the Friday night game hoping to witness history.

The first-place Angels were 19-12 entering the three-game series. The Mariners, with an 18-12 record, were in third, a half-game behind the Angels and the Astros in the AL West. The starting pitchers for both teams were veteran right-handers. Garrett Richards, who had spent his entire eight-year career with the Angels, was pitted against the Mariners journeyman Mike Leake, who was playing for his fourth big-league team.

Pujols, who had played first base and been used as a designated hitter so far in 2018, was starting at first and batting cleanup. He entered the game with a .248 batting average in 30 games; seven doubles and six home runs gave him a .448 slugging percentage.

His first chance at 3,000 hits came in the first inning after Leake walked Justin Upton with two outs. But Pujols lined to shortstop for the third out.

The Mariners threatened to score in the bottom of the inning after leadoff hitter Dee Strange-Gordon singled and went to second on a wild pitch, but Richards got two strikeouts and a groundout to strand him there.

The game remained scoreless the next two innings, and Pujols led off the top of the fourth for the Halos. He battled Leake for nine pitches, but the 10th offering was in the dirt for ball four. Three consecutive singles drove Pujols in with the first run of the game and loaded the bases for Kole Calhoun. The Mariners exchanged two outs for one run when Calhoun grounded into a 3-6-1 double play.

The Angels still led 2-0 in the fifth inning when Pujols came up for the third time, batting with Upton on first and two out. He took a ball, then swatted the next pitch into shallow right field for the historic safety.

Pujols pointed skyward with both hands as he rounded first base and vigorously clapped his hands together as his teammates ran out of the dugout to congratulate him. With a broad smile on his face, Pujols acknowledged the standing ovation from the crowd and tipped his hat in response.3

When game action resumed after the celebration, designated hitter Shohei Ohtani – headed for AL Rookie of the Year honors after signing with the Angels in November 2017 under MLB’s posting agreement with Japan’s Nippon Professional Baseball – doubled down the left-field line to drive in Upton for a 3-0 lead. Pujols was stranded at third base when Leake retired Andrelton Simmons on a popup to the catcher.

Richards coasted with the lead, pitching into the seventh before the Angels turned the game over to the bullpen. In the top of the ninth, Pujols came to bat with men on second and third and one out. He laced a line drive to left field to drive in two runs for his 3,001st career hit, making the final score 5-0.

Pujols put the team ahead of his individual achievements in the postgame interview, saying, “I was really excited, but at the same time you still have a game you need to play, and you still need to focus to win that game. That’s what I told those guys. Let’s go win that game so it can taste a little better.”4

A number of achievements were associated with Pujols reaching the 3,000-hit plateau. He was just the fourth player with 3,000 hits and 600 home runs, along with Willie Mays, Henry Aaron, and Alex Rodriguez.5 Pujols also joined Roberto Clemente (Puerto Rico), Rod Carew (Panama), Rafael Palmeiro (Cuba), Ichiro Suzuki (Japan), and Adrian Beltre (Dominican Republic) as the only members of the 3,000 Hit Club who were born outside the continental United States.6 He was also the fourth player in four seasons to reach 3,000 hits, after Rodriguez in 2015, Suzuki in 2016, and Beltre in 2017.

The Angels held a ceremony to recognize Pujols’ achievement on June 2, 2018, before a game against the Texas Rangers. The team presented him with an artistic rendering of his likeness. Pujols then threw the ceremonial first pitch to Beltre, who was playing in what turned out to be his final major-league season. It was a fitting gesture, connecting the only two Dominican-born players who had reached the 3,000-hit milestone.7

Many thanks to John Fredland and Evan Katz for their careful review of the first draft of this article. Their comments significantly improved the final result. The article was fact-checked by Laura Peebles and copy-edited by Len Levin.