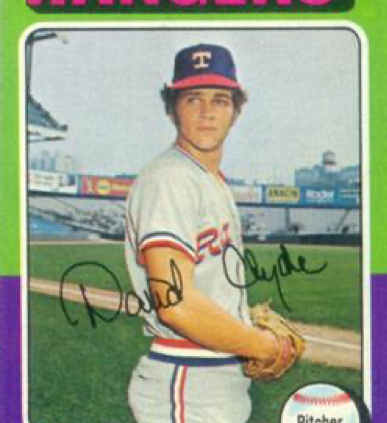 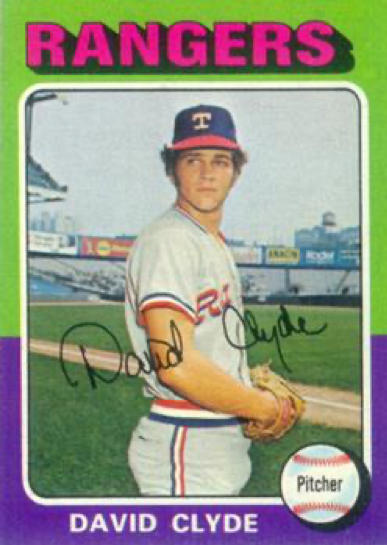 In the spring of 1975, the Texas Rangers finally did with David Clyde what they should have done from the start: They sent the young pitcher to the minor leagues for seasoning.

The Rangers, hungry for a box-office draw, had rushed the hard-throwing Houston-bred lefty to the big leagues just two weeks out of high school in the summer of 1973.1 For the rest of that season and the next, Clyde stayed in the majors, accumulating a 7-17 record and an erratic list of performances. His starts in 1973 and ’74 ranged from a complete-game seven-hit win against the Yankees in New York to a disastrous appearance against the Red Sox in Arlington in which he surrendered six hits, seven runs, three walks, and a wild pitch in 2⅓ innings.2

Rangers manager Billy Martin, who rested Clyde at unpredictable intervals in 1974,3 made clear the following spring that he might send Clyde down for experience.4 The youngster lost any chance to save his big-league job when a tonsillectomy delayed his arrival at spring training.5 The Rangers made it official on April 6, assigning Clyde to the Pittsfield (Massachusetts) Rangers of the Double-A Eastern League.6 The one-time subject of nationwide sports headlines marked his 20th birthday, on April 22, by yielding two hits in five innings in a preseason game against a Western Massachusetts community college.7 Clyde’s adjustment to the minors also included the discovery — in nippy New England spring weather — that minor-league dugouts were unheated.8

After losing two starts on the road, Clyde returned to Pittsfield to make his home debut on May 6 against the Quebec Carnavals, an Expos farm team. The Rangers were seventh in an eight-team league with a 2-5 record, while the Carnavals were last at 3-9.9 It was a long way from Texas’s Arlington Stadium to Pittsfield’s Wahconah Park. Almost 35,700 fans attended Clyde’s big-league debut, but his first regular-season game in Pittsfield attracted just 119.10

Career minor-league skipper Lance Nichols managed the Quebec team. The 1975 Carnavals fielded 11 players who appeared in the majors, and three of them were in the starting lineup on May 6: center fielder Mike Hart, designated hitter Gary Roenicke, and third baseman Van Kelly.11 The start went to 22-year-old righty Randy Fierbaugh, a fifth-round choice of the Expos in the 1974 draft.

Clyde was “dominant” from the start with a “blazing fast ball and a sharp-breaking curve,” according to the Pittsfield paper’s game story. Quebec did not manage a hit until the fourth inning. For the full game, the Carnavals managed only six scattered singles and two walks, while Clyde struck out 12 batters.13

The Rangers gave Clyde all the runs he needed in the second. Fierbaugh walked Jaramillo, Mahlberg, and second baseman Gary Cooper to load the bases. Wills hit a sacrifice fly to center fielder Hart to score one run, and Beasley singled to center to score another. Outside this rally, Fierbaugh pitched effectively. In six innings of work, he gave up four hits and six walks, struck out seven, and yielded only two runs. A fourth-inning double by Jaramillo was Pittsfield’s only extra-base hit. Reliever Don Albin closed out the game for Quebec with two innings of one-hit shutout ball.14

Quebec’s only significant rally came in the fifth inning, and it included a brawl that saw manager Moore and shortstop Wills ejected. Carnavals catcher Terry Childers and Biagini singled to start the inning. Second baseman Felix Peguero bunted and Mahlberg threw to third, but umpire Dave Pallone ruled the lead runner safe — loading the bases with no outs. After Moore was ejected for arguing the call, Wills continued the debate. He jostled Pallone, the umpire pushed him back, and something between a shoving match and a fistfight ensued, with other Rangers joining the fray. Clyde was unruffled: When play resumed, he struck out Hart, induced Roenicke to pop to second base, and struck out first baseman Bobby Goodman to close out the inning without a run.15 Moore was later suspended for one day and Wills for three, and both were fined.16

The game wrapped up in 2 hours and 16 minutes, with the score remaining 2-0, Pittsfield. Clyde claimed his first win of the season while Fierbaugh dropped to 0-2. Clyde struck out everyone in Quebec’s lineup at least once, except for Kelly.17 Coincidentally, Kelly had been the San Diego Padres’ starting third baseman on April 22, 1970, when the Mets’ Tom Seaver set a major-league record by striking out 19 batters. Kelly whiffed three times in that game.18

Clyde stayed in Double A until September. In retrospect, the season seems to have been positive for his development, aside from a three-week disabled stretch in August when he injured an ankle while jogging at Thetford Mines.19 Clyde finished with a 12-8 record, a 3.07 ERA, and 131 strikeouts — just seven behind the league leader, a gap he might have closed if healthy.20 He said he welcomed the chance to develop his breaking ball, be around teammates his own age, and step out of the spotlight: “It gets to be a drag. I like to get out of the public eye because I like to have a lot of time to myself, just being alone to relax.”21 Called up to Texas in September, Clyde pitched shutout baseball for seven innings against California before weakening in the eighth inning of a 3-2 loss. It was his only big-league appearance of 1975.

Unfortunately for Clyde, his 1975 season was not the career turnaround it might have been. He suffered a shoulder injury the following spring, and surgery to repair a nerve problem in his throwing shoulder cost him most of the 1976 season. He made it back to the majors with Cleveland in 1978 and ’79 but found no great success, going 11-15 in 37 games. After a minor-league comeback attempt in 1981, he left baseball.22 His name is still invoked as a cautionary tale any time a major-league team fast-tracks a pitching prospect.

Quebec closed the season at 63-73, in fifth place, 20½ games behind the dominant Reading Phillies. Pittsfield finished right behind them at 59-73, 22½ games back. Quebec hosted affiliated minor-league ball for two more seasons. Pittsfield hosted a Double-A team in 1976 and 1985-88, then hosted Class A teams from 1989-2001. Both cities have supported independent-league teams in more recent years.

In addition to the sources cited in the Notes, the author used the Baseball-Reference.com and Retrosheet.org websites for general player, team and season data.

Neither Baseball-Reference nor Retrosheet provides box scores of minor-league games, but the May 7, 1975, edition of the Berkshire Eagle of Pittsfield, Massachusetts, published a box score for this game.

Image of 1975 Topps #12 downloaded from the Trading Card Database.

3 Clyde’s 1974 game log on Retrosheet shows several gaps in which the young pitcher went one, two, or almost three weeks between appearances. Clyde has said in interviews that Martin “sat me down for a month” after Clyde began the season with a 3-0 record; the game log does not show a break of that length at that point in the season. See Ray Buck, “David Clyde,” Fort Worth (Texas) Star-Telegram, June 15, 2003: 1A.

7 The start of the Pittsfield team’s regular season was delayed several days by inclement weather in Pittsfield and Thetford Mines, Quebec, home of the Brewers’ Eastern League affiliate. More information on Clyde’s start against the community college, as well as the delayed start to the season, can be found in Roger O’Gara, “Clyde, Boggs Pitch Well as Rangers Top BCC 3-1,” Berkshire Eagle (Pittsfield, Massachusetts,) April 23, 1975: 24. (BCC is Berkshire Community College, whose main campus is in Pittsfield.)

9 The Phillies’ farm club in Reading, Pennsylvania, was in first place at 11-4. Eastern League standings as printed in the Berkshire Eagle, May 6, 1975: 20.

11 Big-leaguers who played for the 1975 Carnavals but did not appear on May 6 included Hal Dues, Gerry Hannahs, Tim Ireland, Joe Keener, Joe Kerrigan, Larry Landreth, Dave Leonhard, and Bob Reece.

12 Others on the Pittsfield team who made the majors were Len Barker, Tommy Boggs, Dan Duran, Marty Martinez, John Poloni, and John Sutton.

19 Mike Shropshire, “Speedy Mound Duo to Collide Tonight,” Fort Worth Star-Telegram, August 4, 1975: 1C. Clyde was going through a divorce in 1975, according to multiple news stories, so this assessment of his “good season” is solely a comment on his on-field performance.

20 Rick Anderson of West Haven led the league with 138 strikeouts, according to the 2019 Eastern League media guide, accessed online October 23, 2020.

22 Some news reports have said alcoholism contributed to Clyde’s decline. In Buck (see Endnote 3) and other stories, Clyde has said that while he sometimes drank to excess, it was not a factor in his on-field problems.