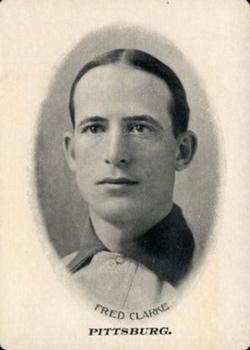 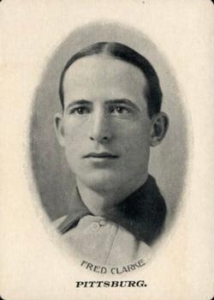 The Pittsburgh Pirates, two-time defending National League champions, opened the 1903 season with four games at Cincinnati, which they swept, outscoring the Reds 27-11.1 The second four-contest series between the two clubs started on May 7, this time at Pittsburgh’s Exposition Park. Pittsburgh had won eight of the 14 games since the initial series and was tied with the New York Giants for first place in the NL. Cincinnati had won seven of 12 coming into Pittsburgh, including five in a row, but still found itself in sixth place.

The Pirates’ offense was led by their player-manager and team captain, Fred Clarke, who ranked first in the league in hits (27) and triples (4 – tied with teammate Honus Wagner); he was third in runs scored (16) and slugging percentage (.557) and fourth in batting average (.386).2

A pair of right-handers faced each other on the mound, in front of about 3,400 spectators. Brickyard “Roaring Bill” Kennedy started for the Pirates, while Jack Harper got the nod for the Reds. Kennedy had won his first two starts of the season. Harper was making his fourth start; he had lost on Opening Day to Deacon Phillippe and the Pirates, 7-1.

The scoring started in the top of the third, when Cincinnati’s Joe Kelley tripled. An out later, Mike Donlin “punched a jumper over second”3 and Kelley scored. The Pirates matched that run in their turn at bat. Harper hit Ed Phelps with a pitch.4 Singles by Kennedy and Ginger Beaumont loaded the bases. Clarke, who had doubled in the first, hit a fly ball to tie the game, as all three runners advanced a base. Tommy Leach grounded to short, and Kennedy was tagged out in a rundown trying to score. Harper walked Wagner to load the bases again, but Kitty Bransfield’s popout to second ended the threat.

The Reds recaptured the lead in the fourth. Tommy Corcoran doubled to left and moved to third on George Magoon’s sacrifice. After Heinie Peitz was retired, Harper singled up the middle, plating Corcoran.

According to the Pittsburgh Gazette, the Pirates “got a shade [of] the worst of the umpiring yesterday, nearly every close decision being against the home team.”5 A play in the bottom of the fourth illustrated the local newspaper’s frustration. With Smith on third, Beaumont lifted a pop fly down the left-field line. Corcoran chased it from shortstop and Magroon from third, and Corcoran “got under it just inside the foul line, but dropped it.”6 Smith crossed home plate easily, but umpire Bob Emslie called the ball foul. Despite protests that the “hit was a fair one beyond doubt,”7 the call stood and Smith returned to third base. He did not score.

Through the first four innings, Harper held the Pirates hitters to five hits, and although he had walked three, only one run resulted.

More excitement took place in the fifth. In the top of the frame, the Reds loaded the bases with only one out. Corcoran tapped a “puny roller”8 back to Kennedy, who forced Cy Seymour at the plate. Pittsburgh’s catcher Smith threw to first for the double play, but his throw pulled Bransfield off the bag. Cincinnati now led, 2-1.

In the bottom of the inning, Clarke led off with a walk. With Clarke at second,9 Wagner grounded to Corcoran, who turned and threw the ball to Magoon at third. The ball was in time to get Clarke, but he had banged into the fielder “with all the abandon of a baggage smasher tossing a new trunk down a flight of stairs,”10 and the two players exchanged words.

With Bransfield batting, Wagner tried to steal second and “went into the bag feet first.”11 Cincinnati second baseman Jack Morrissey tagged Wagner out and then made “a threatening advance”12 on the runner. Pittsburgh’s newspapers claimed Wagner tried to defend himself, especially when “Morrissey made a move as to strike the Pirate,”13 but Cincinnati’s press made Wagner out to be the aggressor, insisting he tried to spike Morrissey. The Reds infielders surrounded Wagner, and umpire Bug Holliday pushed his way through to restore peace, and “at the same time ordered Wagner out of the game.”14 The play resulted in the inning’s final out.

Kennedy “pitched in a fine form”15 through the first six innings, allowing just two runs to the visitors. In the seventh, however, Cincinnati’s batters figured out Kennedy’s delivery and “pounded the ball all over the field.”16 The Pittsburgh righty allowed seven hits (six singles and a double) and a base on balls, and he hit a batter. From this combination, the Reds scored six runs, taking an 8-1 lead.

In the seventh inning, the “locals got after”17 Harper. After Beaumont singled, Clarke “sent a screamer away down almost to the flagpole and made a circuit of the bases.”18 This was his first homer of the season.

Leach bunted and made it to third when third baseman Magoon threw the ball away for an error. Harper struck out Merritt, who had replaced Wagner after the ejection. Bransfield walked and Otto Krueger was then hit in the head with a pitch, loading the bases. Claude Ritchey’s grounder to Morrissey was thrown away, and Leach scored. Harper walked Smith, which brought Bransfield home. In the inning, the Pirates combined three hits with a base on balls, a hit batsman, and two errors to push four runs across, cutting the deficit to 8-6.

Cincinnati had its own excitement with the umpire in the eighth. Bucky Veil entered the game to relieve Kennedy. Over the next two frames, he retired the Reds without allowing a base hit. When he struck out Corcoran to end the eighth, the Reds shortstop disagreed with the call and “threw his bat down in a rage.”19 This was the final out in the inning, and although Corcoran was not officially ejected, accounts show that Emslie benched him;20 Harry Steinfeldt replaced Corcoran at short.

Harper started the eighth inning still on the mound. Beaumont bunted and reached third on Magoon’s second error of the game. Clarke’s single – his third hit – drove in Beaumont, making it a one-run game. After Harper hit Leach with a pitch, ex-Pirate Ed Poole was called in from the bullpen.21 In three-plus seasons, this was only the fifth time Poole had pitched in relief. After a stolen base by Clarke, two more singles, another defensive miscue, and a wild pitch, the Pirates had tied the score, coming all the way back from their seven-run deficit.

In the ninth inning, with Veil at the plate, Clarke cheered his squad on from his spot in the coaching box. According to the Pittsburgh Press, “Clarke made a trumpet with his hands and called out: ‘Get after it, Buck. You can hit it. Never say die. This game is not won yet. Go at it now and hit it out.’”22

Despite Clarke’s encouragement, both Veil and Beaumont were retired, but then Clarke took his turn in the batter’s box. He “landed on one of Eddie Poole’s twisters and sent it out to the 25-cent bleachers in left field.”23 Seymour fielded the ball and threw to Steinfeldt, who relayed to Poole, and the pitcher threw the ball to catcher Peitz, just as Clarke “dove into the dirt.”24 In a true game of inches, Clarke was tagged out as he reached for the plate. Clarke had a triple, a four-hit game, and a cycle, but the score remained tied. The action moved to the 10th inning.

This was Cincinnati’s first extra-inning game of the season (and Pittsburgh’s third). Jake Beckley led off with a walk from Veil. Morrissey’s single to right put runners at the corners. Steinfeldt lined a ball past third baseman Leach for an RBI. Magoon hit a hard smash to Leach, too, who fielded it cleanly but threw wild past second baseman Ritchey, and Morrissey scored with Steinfeldt advancing to third. Peitz’s fly ball brought Steinfeldt home.

The three run-lead stood as the Pirates managed one hit in the bottom of the 10th, a double to Leach, but he was stranded. Despite committing five errors, the Reds had won 11-8 and extended their win streak to six games. For the season, Pittsburgh played 20 games against Cincinnati. The Pirates won 16 of them, batting .286 as a team against the Reds.

By not scoring in the bottom of the ninth, Clarke had collected a single, double, triple, and home run in the game, as well as a walk and a sacrifice. Clarke’s batting average jumped to .419, and his slugging percentage shot up to .662.25 He had hit for the cycle for the second time in his career. His first cycle occurred on July 23, 1901, also against Cincinnati.

This game was fact-checked by Kevin Larkin and copy-edited by Len Levin.

2 The author determined these figures based on a review of relevant game logs at Retrosheet.org.

4 Phelps had to leave the game and was replaced by Smith as Pittsburgh’s backstop.

9 The Cincinnati Enquirer credited Clarke with a stolen base in the fifth inning, while the Pittsburgh Press claimed the successful swipe took place in the eighth inning. See “Sixth Consecutive Victory,” Cincinnati Enquirer, May 8, 1903: 4, and “Captain Clarke Hero of Game,” Pittsburg Press, May 8, 1903: 22. Both Retrosheet and Baseball-reference credit Clarke with only one stolen base in the game. I chose to cite the home source as accurate, although I don’t have an explanation for how Clarke got to second base in the fifth inning.

20 According to the Retrosheet box score, the only ejection in the game was Honus Wagner by umpire Bug Holliday, for attempting to spike Jack Morrissey.

21 According to both Retrosheet and Baseball-Reference, Poole was sold by Pittsburgh to Cincinnati in April 1902. However, he made one appearance for the Pirates, in relief of Jack Chesbro, on May 14, 1903, in a home game against the Boston Beaneaters. His first game for Cincinnati took place on July 21, 1902.

25 Clarke finished the 1903 season batting .351 and slugging .532, which was best in the National League. His 32 doubles also led the senior circuit.