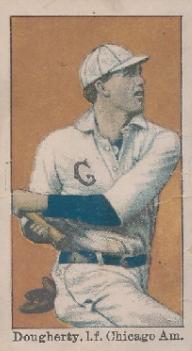 A crowd of 4,135 fans turned out to watch the New York Highlanders take on the Americans at Boston’s Huntington Avenue Baseball Grounds.1 The two teams had been battling each other for six games already. (They had played four in New York and then came to Boston to play four more.) The first-place Americans had won four straight and five of six in that stretch, dropping the fifth-place Highlanders to 14 games back.2 The fans could have been expecting a pitching duel, as future Hall of Famers Cy Young (18-4) and Jack Chesbro (11-12) were scheduled to pitch. Young had established himself as the best pitcher in the American League and had won his previous nine decisions. Chesbro had a 2.88 ERA but had lost five straight decisions. However, the game was anything but a display of fine pitching.

Wid Conroy opened the game for the Highlanders with a double on the second pitch and moved to third on an infield single by Willie Keeler. Keeler stole second and an out later, Jimmy Williams singled to right field, driving both baserunners home. (On the play, Williams was thrown out trying to take second.) Herm McFarland then doubled. Jesse Tannehill reached when first baseman Candy LaChance couldn’t handle a throw; catcher Lou Criger had backed up the play but then threw wildly to second, trying to catch Tannehill there. The two errors allowed McFarland to score. New York had jumped to a quick 3-0 lead.

In the home half, Patsy Dougherty, Boston’s leadoff hitter, drove a “home run to the left bank,”3 his fourth (and last) homer of the season. Buck Freeman banged a two-out triple but was left stranded at third.

New York added three more runs in the second inning. Jack O’Connor singled to start things but was forced at second by Chesbro. With two outs, Keeler reached on an error by shortstop Freddy Parent, and Kid Elberfeld drove one of Young’s offerings to the fence in right field, clearing the bases. A poor throw to the cutoff man allowed Elberfeld to also score. (He was given credit for a triple.) Young retired the next two, but he was soon back out on the mound, as Chesbro struck out the side in the bottom of the second.

In the third, Dougherty’s double led to a Boston run when Jack O’Brien lofted a fly ball to center and McFarland misplayed it for a run-scoring error. An inning later, Parent and LaChance started things for Boston with back-to-back singles. After Hobe Ferris forced LaChance at second, Criger singled, driving in Parent. Young struck out, but Dougherty picked him up with a single up the middle, plating Ferris. Boston had cut the New York lead to two runs. The Highlanders got one back in the fifth on a pair of errors by Boston’s Parent, including one on which he had “oceans of time”4 but rushed a throw to the plate and threw the ball away trying to get Elberfeld coming down from third.

O’Brien knocked a solo homer to center to start the bottom of the fifth. Singles by Freeman and Ferris, coupled with an error by Elberfeld and an RBI grounder, led to two more Boston tallies. They had come from five runs down to tie the score, 7-7.

New York answered. O’Connor grounded a ball to Parent, but his throw was “ten feet wide of first,”5 allowing O’Connor to advance to second. Chesbro sacrificed him to third, and O’Connor scored on Conroy’s double. Keeler banged a single to bring home Conroy. Elberfeld grounded to second baseman Ferris, who threw to Parent for the force out at second base, but Parent dropped the ball. This kept the inning alive and Williams singled to bat in Keeler. New York had retaken the lead.

Dougherty, leading off the sixth, already had three hits. He “cracked a triple”6 and scored on a single by Jimmy Collins. O’Brien tripled, and suddenly it was a one-run game again. New York skipper Clark Griffith made a pitching change, bringing in Harry Howell to relieve Chesbro. Howell had begun the season in the New York starting rotation, but after three starts was relegated to the bullpen. He retired Freeman and Parent, but Parent’s fly out brought home O’Brien, knotting the score at 10 runs each.

It didn’t stay that way long. John Ganzel opened the Highlanders’ seventh inning with a single. O’Connor bunted him to second and Howell knocked an RBI single. Conroy tripled, plating Howell, and then he scored on Keeler’s single. In the next day’s Boston Globe, readers were told that “Cy Young should have gone to the stable when Chesbro was sent there, if for nothing more than to give the spectators a run for their money.”7 But Young stayed on the mound. Keeler stole second and took third on Criger’s second throwing error of the day. He scored on a routine grounder by Williams.

The score remained 14-10 in favor of the visitors until the ninth. In the top of the inning, Young retired both Conroy and Keeler but Elberfeld doubled and scored on Williams’s triple. In the bottom, Boston gave the fans something to cheer for. With one out, Parent reached on an error by Elberfeld. Howell walked LaChance. Both baserunners scored on a triple by Ferris, who trotted home on a bad relay throw. Chick Stahl pinch-hit for Criger but struck out. Jake Stahl8 then entered as a pinch-hitter for Young and launched a triple to deep left (the seventh three-bagger of the game). That brought up Dougherty, who was already 4-for-5 with a single, double, triple, and home run. He came through again, singling in Jake Stahl for Boston’s 14th run. Having seen their team fight back to make it a one-run game, the fans were screaming. But Collins hit a bounder to Conroy at third, who tossed the ball easily to second for the final out of the game. New York had prevailed, 15-14, snapping their four-game skid. Despite the explosion of runs, the game lasted only 2 hours and 10 minutes.

This was not a day for good pitching. The two squads combined for 34 hits in the batting contest, and there were only two walks. For New York, Conroy, Keeler, and Elberfeld each had three hits, to go with four by Williams. Elberfeld was a home run shy of the cycle himself. For Boston, each starter except Young had at least one hit. Ferris added three runs batted in, as did Dougherty, who had hit for the cycle, adding a single for a fifth safety. Boston fought back twice to tie the game but never could take the lead.

Young’s winning streak had been snapped. In the 11 seasons of the 20th Century that Young pitched, this is absolutely his worst start. He had thrown four consecutive shutouts from June 13 to July 1, making this 15-run (eight earned), 18-hit outing even more of an outlier to his excellent season.

Nor was it a day for good fielding. According to the Globe, Parent “made four bad errors.”9 That gave the Americans’ shortstop 44 for the season (in 84 games). His Boston teammates added four more miscues, and the New Yorkers also had four bungles, three by their shortstop Elberfeld. The New York Times kindly reported that the “fielding of both teams was very indifferent.”10

With his five-hit performance, Dougherty raised his average to .321. This was the second time in his short career that he collected five hits in a game.11 As Boston’s leadoff hitter in only his second season, Dougherty led the American League in 1903 in at-bats (590), runs scored (107), and hits (195), and his final season average of .331 was third best in the AL, leading Boston to its first pennant.

Dougherty’s feat of hitting for the cycle was the third such occurrence of 1903, joining Fred Clarke of the Pittsburgh Pirates (May 7 against the Cincinnati Reds) and teammate Buck Freeman (June 21 against the Cleveland Naps). Cleveland’s Bill Bradley also hit for the cycle on September 24 against the Washington Senators. Freeman and Dougherty had the first two cycles in Boston franchise history. Nine seasons went by before another Red Sox player joined the club, as Tris Speaker hit for the cycle on June 9, 1912, against the St. Louis Browns.

Dougherty was traded by Boston to the New York Highlanders on June 17, 1904 (for Bob Unglaub). According to Ray Anselmo’s SABR biography of Dougherty, the Boston Herald reported the deal, running the headline “DOUGHERTY AS A YANKEE.” This was the first instance in print of the New York American League team being referenced with that nickname.12

Thanks to Richard Dixie Tourangeau for information regarding Cy Young.

1 According to the box score in the New York Tribune, the attendance was 4,150.

8 The two Stahls were not related.

11 On September 29, 1902, in the final game of the season, rookie Dougherty was 5-for-5 (all singles) against the Baltimore Orioles (the team that became the New York Highlanders).