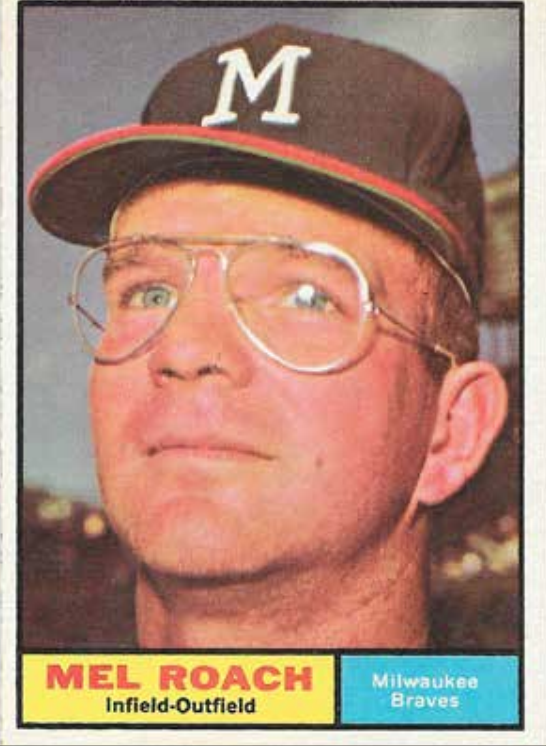 The Phillies’ home opener on April 20, 1961, was a cool spring day at Connie Mack Stadium. The afternoon was cloudy with temperatures in the low 50s. Philadelphia fans should have left happy with an Opening Day win. The Braves had done almost everything wrong heading into the top of the ninth inning. The Phillies were capitalizing on opportunities. They were coming up with hits with runners on and their pitching held the Braves to a lone run. In the top of the ninth inning, though, the Braves completed one of the greatest comebacks in franchise history, tying the score 6-6. The game was pushed into extra innings and the Braves won, defeating the Phillies 7-6 in 11 innings.

The Phillies had returned from the West Coast for their home opener against the Braves with a 2-4 record. They lost two and won one against the Dodgers before heading to San Francisco to walk away with the same record. The Braves came into Philadelphia with a 1-3 record after splitting a two-game series against St. Louis and getting swept in a two-game series in Chicago. Their two biggest sluggers, Hank Aaron and Eddie Mathews, had yet to get their bats going. Aaron came into Philadelphia hitting 3-for-16 with one home run for a .188 average. Mathews was batting slightly better, going 5-for-17 with one home run for a .294 average. The pitching had been competitive, but the Braves’ offense had let them down.

Entering the top of the ninth inning in Philadelphia the Phillies were ready to cruise to a 6-1 win. The Braves’ pitching performance had been lackluster at best. Lew Burdette took the mound to start for the Braves but could not make it out of the fourth inning. In 4⅔ innings Burdette surrendered five runs, all earned, on 10 hits. In relief of Burdette, Seth Morehead came in for 2⅓ innings and gave up another earned run on two hits, leaving the Braves down five runs as they entered the ninth inning.

The Braves offense put together several scoring opportunities through the first eight innings but were able to get only one run across the plate. Hank Aaron had two singles and a stolen base in three plate appearances. Del Crandall, Eddie Mathews, and Joe Adcock were each 1-for-3 with Adcock and Crandall hitting doubles. Burdette even tried to help himself by hitting a single in the top of the third inning, but the offense could not capitalize. Aaron’s single in the fourth was the only hit to plate a run, scoring Crandall from second. Allen Lewis of the Philadelphia Inquirer wrote, “The Braves got a gift run in the fourth when Tony Curry misjudged Del Crandall’s liner and let it sail over his head for a double, and Aaron singled to center.”1

Philadelphia, on the other hand, capitalized on scoring plays. In the second inning they got two runners on but didn’t score. However, in the third inning Johnny Callison hit a double, scoring Bob Sadowski and Tony Taylor. In the fifth inning, Taylor singled, stole second, and came home on Tony Gonzalez’s single. Pancho Herrera singled, and with Gonzalez and Herrera on base, Clay Dalrymple hit Seth Morehead’s second pitch over the wall in right field for a three-run homer. The score stayed 6-1 going into the top of the ninth.

Don Ferrarese, who relieved the Phillies’ Dallas Green to start the fifth inning, returned to the mound in the ninth as the majority of the 9,531 fans headed to the exits. Mathews got a bunt single and Aaron and Frank Bolling hit back-to-back doubles to make the score 6-3. Phillies manager Gene Mauch yanked Ferrarese and brought in Turk Farrell. Farrell gave up a single to Adcock but got Wes Covington to foul out to third baseman Bobby Malkmus and struck out Roy McMillan. The Phillies were one out away from closing out the game when Mel Roach came to the plate as a pinch-hitter to bat for pitcher Ken MacKenzie. On a 1-and-2 count, Roach tied the game with a home run into the upper deck in left.2

After giving up the home run, Farrell hit John DeMerit with a pitch, and manager Chuck Dressen pulled Farrell for Ken Lehman. He walked Charlie Lau but struck out Mathews to end the inning. In the bottom of the ninth the Phillies loaded the bases with two outs but could not get a run across. The score stayed tied until the 11th.

In the top of the 11th, Phillies pitcher John Buzhardt hit McMillan, leading off. Braves pitcher Ron Piche bunted and reached first on third baseman Bobby Malkmus’s wild throw, but was thrown out trying for second when the ball went into the outfield. McMillan reached third.  Lee Maye, batting for John DeMerit, walked, and Lau’s single sent McMillan home and gave the Braves a 7-6 lead. The inning ended when Mathews hit into a double play.

Piche quickly closed out the game in the bottom of the 11th. He got center fielder Tony Gonzalez on a comebacker. First baseman Herrera singled to left, but Dalrymple hit into a fielder’s choice and Bobby Del Greco, batting for pitcher Buzhardt, struck out to end the game.

After the loss Mauch was not a happy man. Wrote Stan Hochman of the Philadelphia Daily News, “‘We gave them too many outs,’ he muttered. ‘We gave them five outs in the ninth inning, and we gave them the first run they got too. … ‘The kid (31-year-old Don Ferrarese) might have come up with Mathews bunt. It would have been a helluva play, but he might have made it. Farrell should have had the ground ball Adcock hit. The homer, well, there isn’t a pitcher around who hasn’t had a three-run homer hit off him one day.’”3

The Phillies’ loss foreshadowed the remainder of their season, which they ended with a record of 47-107-1. While the Braves did not have a pennant-winning season, they ended their 1961 campaign with a winning record of 83-71-1.