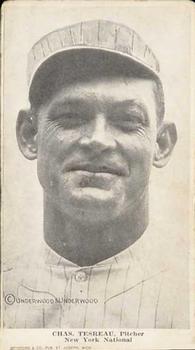 If Red Sox owner James McAleer had made a bundle betting against his own team in Game Six, he may have lost it all in Game Seven when Smoky Joe Wood failed to deliver. New York had scored five runs in the first inning the day before. Now, facing Boston’s best pitcher, they scored six runs before the Red Sox even got up to bat.

Wood may have still been ticked off, or worse, from the events of the day before, and Glenn Stout and Dick Johnson claim in Red Sox Century that he even beat Buck O’Brien, Boston’s Game Six starter, with a baseball bat before the game.1 To add to Boston’s overall discord, a management mistake left the Red Sox’ most prominent diehards disenchanted and delayed the game’s first pitch. Certain seats were routinely held for the team’s booster club, the Royal Rooters, but on this day other spectators were allowed to sit there. The 300-strong troupe of Rooters paraded into the park – only to find their seats filled.

This did not set well, and there was a lot of pushing and shoving on the field, with five mounted policemen having to push back the team’s most loyal fans. Part of the left-field fence was knocked down during the fracas.

The Rooters eventually settled in a very crowded standing-room section, but their feelings of grievance persisted. Many joined in booing Red Sox management in a demonstration after the game, even cheering the New York owners who had reserved a special section for them at the Polo Grounds. Most of the Rooters boycotted the ballclub the following day, diminishing the crowd to nearly half of Game Seven’s paid attendance of 32,694. The faux pas may also have led to American League President Ban Johnson forcing a change in ownership of the Red Sox team itself late in 1913.2

Wood pitched with all of these circumstances stacked against him, not to mention an arm he said was subpar and a “high cold wind” that repeatedly sent “clouds of dust over the field.”3 A reported “gale … shook the stands” during the first and second innings, but then subsided.4 But Smoky was 2-0 in the World Series and the Giants’ Jeff Tesreau was 0-2 against the Red Sox – until this game.

The Giants came out hitting. All nine members of their lineup contributed to their first-inning siege. Josh Devore singled on the second pitch, fumbled a bit by shortstop Heinie Wagner but not enough for an error to be charged. Larry Doyle hit the first pitch he saw for a single to center field. Wood inexplicably took a big windup and the two baserunners executed such a clean double steal that catcher Hick Cady didn’t even throw. The Giants had runners on second and third with none out.

And then Wood “tried to shoot them over, with little regard for the weak points of the batsmen, and the result was a free hitting bee.”5 Fred Snodgrass plated both baserunners with a double to right field; Harry Hooper “made a great try for a low catch, but the ball got away from him.”6 Red Murray bunted Snodgrass from second to third. Fred Merkle singled to left field (the ball was carried away from Duffy Lewis by a high gust of wind), scoring Snodgrass; he took second on Lewis’s errant throw to the plate. New York had a 3-0 lead.

Buck Herzog hit the ball back to Wood, who caught it with his bare hand, whirled, and got Merkle in a rundown – but Herzog took second while Murray was being chased down. Herzog scored the fourth run of the inning when Giants catcher Chief Meyers singled. Art Fletcher got in the act, singling to the right side. Meyers ran to third.

The pitcher, Tesreau, hit the ball off his counterpart’s hand and reached safely. Meyers scored on the play and Fletcher took third. The Giants then pulled off their second double steal of the inning: Tesreau was tagged out in a rundown between first and second, but not until Fletcher had scored on a delayed steal of home. The Giants had hit aggressively, going through the order in 15 pitches or fewer. It was New York 6, Boston … coming to bat.

Boston batted in the bottom of the first but didn’t succeed at it. Manager Jake Stahl had allowed Wood to complete the first inning but didn’t send him out for the second, keeping alive the possibility that he could return in Game Eight if necessary.

Charley Hall came in to pitch for the Red Sox, and adventures on the basepaths ensued. Hall set the stage by walking Devore, who stole second. Hall also walked Doyle – but then picked off Devore. Snodgrass singled and Doyle stopped at second. He was apparently picked off second, too – but Hall committed an error and Doyle rounded third and scored. Finally, Hall got the last two batters. One run had been added. 7-0, Giants.

Boston shortstop Larry Gardner bounced a home run over the center-field fence in the bottom of the second (such bounces into the stands in fair territory counted for home runs in those days) to get the Red Sox on the scoreboard.7 The next three batters were put down easily, though.

The Giants extended their lead to 9-1 in the top of the sixth when Devore walked and Doyle added a bounce home run of his own.8 The home runs by Gardner and Doyle were the only home runs in the eight games of the 1912 World Series.

Tesreau drove in another run in the seventh, singling in Meyers. The Red Sox responded with two runs in the bottom of the inning. Tris Speaker singled and Lewis doubled. Speaker scored on Gardner’s grounder to short. Larry Doyle misplayed Stahl’s ball and Lewis scored.

In the bottom of the eighth, after Cady reached on Doyle’s second error (the Giants made four in the game), the Red Sox scraped together another run on Hall’s single (Cady took third on Devore’s error), and a sacrifice fly to center.

The Giants scored the game’s final run in the ninth, after Herzog walked and Art Wilson singled to center field. (Wilson had taken over catching duties from Meyers in the middle of the seventh inning. His single came in the only at-bat he had in the 1912 World Series.) Speaker made an uncharacteristic error attempting to field Wilson’s single, and Herzog was able to round the bases and score. Tesreau closed out the Red Sox in the bottom of the ninth for the Series-evening 11-4 win.9

After the game, Tesreau wrote, “It was one of the worst games of ball that I have ever pitched since I have been with the Giants, but I was lucky to go up against Joe Wood, when he was worse, lots worse, that I was.”10 He felt good about the prospects of the Giants winning the deciding game the following day, declaring of the Red Sox, “It is a one-man team. When Wood is beaten, the club is down and out.”11

Giants manager John McGraw agreed, predicting victory the following day. His team had momentum. “In a race if you can catch a man from behind you take the heart out of him. We will be the ones who will be confident tomorrow. … I want to state most emphatically that when we take the train for New York tomorrow night we will have the right to call ourselves the baseball champions of the world.”12

All told, the Red Sox put at least one man on in every inning. Nineteen Red Sox reached base in all. Several were erased, but 12 men were left on, and the Sox failed to take advantage of the vulnerable Tesreau after beating him twice earlier in the Series. Hugh Fullerton decried Boston’s baserunning as “the most wretched exhibition of base running ever given by a championship team. They ran bases like a bunch of farmers.”13 Hall put more than his share of Giants on base, too, walking five – three of whom came in to score. It wasn’t the prettiest of games.

The New York Times concluded after the game that Wood had needed at least one more day’s rest “after his nerve-wracking games of last week. He is not tireless like Walter Johnson or ‘Ed’ Walsh. He needed a good rest, he didn’t get it, and he cracked.”14

Wood had, of course, worked only one inning, and could be called on to pitch again if truly necessary, but the Red Sox had another pitcher in Hugh Bedient, the rookie who had excelled in Game Five, throwing a three-hitter. The choice was Stahl’s.15

The only lopsided game of the Series left Boston fans discouraged and presented Bedient with the responsibility of salvaging what days before had seemed a predestined World Series win for the Red Sox. The Giants would be going with Christy Mathewson.

8 A note on Baseball-Reference.com provides a succinct definition of the term: A bounce home run was a home run that went over the outfield fence after hitting the field. The rule that considered such hits as home runs was changed in the 1930s, and today they are considered to be automatic doubles (what are commonly called, although incorrectly, ground-rule doubles). Al Lopez is considered to have hit the last bounce home run, in 1930. See https://baseball-reference.com/bullpen/Bounce_home_run

9 The World Series was even at three wins for each team. Game Two had been a tie game.