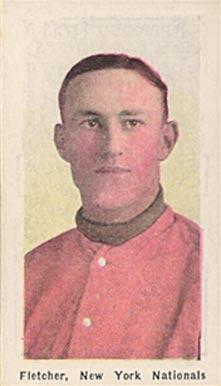 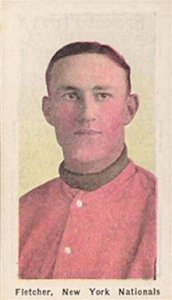 Art Fletcher was the leader of one of the Deadball Era’s finest infields—Merkle at first, Doyle at second, Fletcher at short, and Herzog at third. “If there be one among the gamesters of baseball who is gamer than the rest, that man be Fletcher,” wrote sportswriter Frank Graham. In the early teens the New York Giants were hated all over the circuit, but no Giant other than John McGraw drew as much ire as the feisty shortstop. “There was fighting everywhere they went,” wrote Graham, “and Fletcher always was in the thick of it. He fought enemy players, umpires, and fans. He was fined and suspended frequently.” Fletcher’s feistiness made him as popular at the Polo Grounds as he was unpopular on the road. Beginning in 1913, a lady with a large hat invariably sat in the front row of the centerfield bleachers. When the Giants took the field at the start of each game, she would shout, “Come on, Artie!” Fletch would wave his glove at her, all the fans would applaud, and then the visiting leadoff hitter would step to the plate.

Arthur Fletcher was born on January 5, 1885, in Collinsville, Illinois, just across the Mississippi River from St. Louis. A skinny, lantern-jawed youngster who was Collinsville’s best ballplayer, Art traveled over an hour by trolley to play in more competitive games than he could find in his hometown. His parents opposed his dream of playing professional baseball, however, so he attended a business college in St. Louis, graduating with a degree in stenography. In 1906 Art played shortstop for Staunton, Illinois, performing well enough to receive an offer from Dallas of the Texas League for 1907. But his father pressured him to keep his full-time job at Ingersoll-Rand, the company that manufactured the drills that were digging the Panama Canal, so he remained at home and played for the Collinsville Reds. In March 1908 Art arranged a two-week vacation from work so he could attend spring training with Dallas. Because business was slow due to an economic downturn, his boss told him that he could take the summer off and return in October if he made the club.

That very spring, the New York Giants played a series of exhibition games against Dallas. Fletcher refused to act awed by the major leaguers (including their pugnacious manager, John McGraw), and sassed them back as roughly as they sassed him. He slid into them, spikes high, and when their pitchers threw at him he continued to crowd the plate and socked the ball even harder. Fletcher’s fearless attitude and play so impressed McGraw that he bought an option on his contract for $1,500. Years later Art admitted, “I was a pretty fresh busher.” McGraw reportedly said of him, “That’s my kind of ball player.” After batting .273 with 35 stolen bases in 147 games as the Dallas shortstop, the 24-year-old Fletcher joined the Giants as part of an influx of rookies in the spring of 1909, serving as utility infielder during his first two years with the club. He was so self-conscious about his jutting chin that he had a collar sewn on his uniform that he wore turned up.

McGraw saw something—perhaps a mirror image of himself—in the brash, brainy youngster. At the start of the 1911 season he benched his veteran third sacker, Art Devlin, in favor of Fletcher. In mid-May the Giants traded their regular shortstop, Al Bridwell, back to the Boston Nationals for Buck Herzog. McGraw installed Herzog at third base and gave Fletcher the regular job at shortstop. Initially the fans couldn’t believe that a former utility man was replacing the popular Bridwell, and they razzed Art unmercifully. But he soon won them over with his sterling defensive play and offensive skills that were far superior to Bridwell’s. The gritty right-handed hitter finished fifth in the National League in batting average (.319) and on-base percentage (.400), and began a 10-year streak of ranking among the league leaders in times hit by pitch (except for 1915, he led the NL in that category each year from 1913 to 1918). He was also a notorious free-swinger; his 30 bases on balls in 1911 were a career high, and in 1915 he drew only six walks despite a career-high 562 at-bats.

Though he never batted .300 again, Fletcher frequently finished just below that mark, compiling a .277 batting average over the course of his 13-year career. He also fielded brilliantly, drawing comparisons to Wagner, Tinker, and Doolan. With Art as their shortstop, the Giants won three pennants in a row—1911, 1912, 1913—and an additional one in 1917, the year that McGraw named him team captain. Fletcher didn’t distinguish himself in the Fall Classic, batting just .191 and committing a dozen errors in his 25 World Series games. Some of his miscues were extremely costly. In Game Three of the 1911 World Series, Art’s error in the top of the 11th inning helped the Philadelphia Athletics score twice and hand Christy Mathewson his first World Series defeat, 3-2. The following year, Fletch committed three errors early in Game Two to give the Boston Red Sox a 4-2 lead. The game eventually ended in a 6-6 draw.

On June 8, 1920, McGraw sent the 35-year-old Fletcher (along with pitcher Bill Hubbell and $100,000) to the Philadelphia Phillies for 29-year-old Dave “Beauty” Bancroft, the NL’s best shortstop. Fletch hit .296 in 102 games for the Phillies but the team was hopeless. When his brother and his father both passed away in the spring of 1921, Art went back to Collinsville and sat out the entire 1921 season. He returned in 1922 and batted .280 in 110 games despite his one-year sabbatical. In one game that season Art thought that umpire Bill Klem was favoring the Giants. “Why don’t you put on a New York uniform?” he remarked. That earned him an ejection, and a few minutes later a banner was hung from the centerfield clubhouse with the words “Catfish Klem.” Klem hated that nickname, and he halted the game until the sign came down. Fletcher always received the blame for that sign, but years later he admitted that he didn’t create it; he merely encouraged a teammate to do it. Regardless, the league fined Art $50 and suspended him for three days.

After the 1922 season Fletcher gave up playing and accepted the job as Phillies manager. His fiery leadership improved the team’s record in each of his first three years, but never enough to please an old Giants who was accustomed to finishing in the first division. In a desperate attempt to hold down scoring at the Baker Bowl bandbox, Art ordered the groundskeeper to keep the baseballs for the next day’s game in a freezer overnight so they wouldn’t travel as far; he felt badly when Phillies outfielder Cy Williams missed tying Rogers Hornsby‘s NL home-run record of 41 by one homer in 1923.

The next year Fletcher brought the seventh-place Phillies to New York for a year-end series with the Giants, who were locked in a pennant race with Brooklyn. Phillies shortstop Heinie Sand told Art that Giants outfielder Jimmy O’Connell had offered him $500 “not to bear down.” Fletcher exposed the bribe attempt and O’Connell and Giants coach Cozy Dolan were both banned from baseball. In 1925 the Phillies tied for sixth place, their best finish since 1918, but the following year they regressed to last. Tired of losing and realizing that he might ruin his health if he continued in his fighting ways, Art decided to resign.

The next year Miller Huggins, an old National League friend, persuaded Fletcher to take a coaching job with the New York Yankees. Art loved coaching for a winning team and soon became famous for turning down several managerial offers to remain with the Yankees. He did manage the Bronx Bombers for 11 games at the end of the 1929 season, but only because Huggins was hospitalized. When Huggins died and was replaced by Joe McCarthy, reporters speculated that Fletcher would be fired because he and McCarthy had feuded in 1926 when they both managed in the NL. But McCarthy recognized Art’s value, and the third-base coach and master heckler remained with the Yankees until heart problems forced him to retire in 1945.

Fletcher’s more than $75,000 in World Series and first-division checks enabled him and his wife, Irene, to live in extreme comfort in Collinsville, where they returned after every season. When Art Fletcher died in Los Angeles of a heart attack on February 6, 1950, it was reported that he had cashed more Series checks than anyone in the history of baseball.