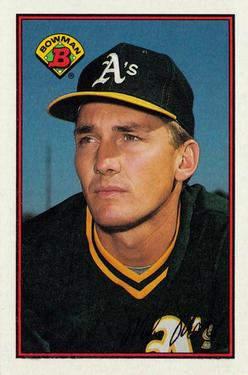 After Dave Stewart’s masterful mound performance, leading the A’s to a dominant 5-0 win while limiting the Giants to just five hits, Oakland was clearly focused on winning the 1989 World Series. Manager Tony La Russa was pleased with his team, saying, “They’re going about it professionally. But it’s not time to back off.”1

La Russa went to Mike Moore to start the second game. Moore had left Seattle after the 1988 season with a 66-96 record and signed with Oakland. The right-hander ended up with a 19-11 record and 2.61 ERA in his first season with the A’s.

Moore, under the tutelage of Oakland pitching coach Dave Duncan, added the split-finger fastball early in the season. That pitch would become his most useful weapon. The split-finger was the same pitch Stewart had used to befuddle the Giants in the first game.

Giants manager Roger Craig even commented on Moore’s pitch, saying, “I saw him with Seattle and he’s got a good split-finger now.”2 He went on to say, “Every guy they throw out there has a better split-finger than the guy before. Their pitching can’t get much better than it is right now.”3

“I’m hitting stupid,” said Matt Williams after struggling in the first game. “I’ve got to start recognizing [the split-finger]. It comes in looking like a fastball. Looks just like a fastball. And I have been taught to hit that kind of fastball. So I swing. As I swing, I discover that it is not just a fastball. It goes out of the strike zone. It’s a bad pitch. So I swing and miss.”4

Moore walked Brett Butler, the first batter he faced. But the Giants failed to take advantage of the opportunity when Moore got the next three batters out. He continued to shut down the Giants sluggers in the second, getting Ernie Riles to fly out to right field in between striking out Williams and Candy Maldonado.

Craig went with 40-year-old Rick Reuschel to start Game Two. When Reuschel took the mound, he became the second-oldest pitcher to start a World Series game. Jack Quinn was 46 years old when he pitched for the Philadelphia Athletics in the 1929 Series.5

Reuschel got off to a shaky start when he walked leadoff batter Rickey Henderson on four pitches. “I can’t remember the last time I’ve seen him throw three straight balls, much less four straight balls … much less to the first hitter of the game,” said Giants pitching coach Norm Sherry.6

Henderson, who led the American League in walks and stolen bases in 1989, stole second on Reuschel’s second pitch to Carney Lansford. On the next pitch, Lansford’s double brought him across the plate with the game’s first run.

The Giants tied the game in the third and “for a moment, it seemed as if there would be life to the game and to the Giants, who on Saturday night had looked nothing like the team that had won the National League playoff in five games with late-inning heroics.”7 Jose Uribe reached first on a force out after Terry Kennedy’s leadoff single. Butler’s single pushed him to third and Robby Thompson’s sacrifice fly plated the Giants shortstop and tied the game, 1-1.

Butler ended up on third on a wild pitch, but Moore fanned Clark for the third out. The Giants slugger, who would end up hitless in a postseason game for the first time, said, “We’re not hitting into any luck. Moore was just like Stewart: very, very tough. We’re just a good ballclub going up against a good pitching staff.”8

Then came the fourth. Reuschel walked Jose Canseco on a 3-and-2 pitch. Canseco had “ceased his wild flailing at the plate” that left him hitless in his last 22 World Series at-bats since his grand slam in the first game of the 1988 Series.9

Dave Parker then lifted a pitch toward the right-field corner. The ball came within inches of clearing the fence. Umpire Rich Garcia said it hit the yellow line marking the top of the fence and Parker landed on second with double.

Right fielder Maldonado had grabbed the ball as it bounced off the wall and had a chance to get Canseco at home. Instead he threw to second. “Candy came up throwing,” said Craig. “He couldn’t find the relay man. He could have had a play at home and maybe stopped the inning.”10 The game was briefly halted when “feathers flew” and the umpires had to “hunt a pheasant — a pheasant! — that somehow wandered onto the field” after Parker’s hit.11

The Oakland batters continued to surprise Reuschel. Dave Henderson came to bat next and Reuschel walked him on five pitches. “I’ve played with Dave Henderson before, I know he is usually a first-ball hitter,” Reuschel said later. “He laid off pitches that I was sure he would swing at. He waited me out and battled me. And got on. I know that some of the other guys over there also have that reputation. But not tonight. They put me in a situation where I had to put the ball in there.”12

Reuschel struck out Mark McGwire. Then catcher Terry Steinbach, on a 2-and-0 pitch, sent the ball into the left-field seats. Steinbach had flied out in the second inning. He told reporters, “Sometimes the ball carries well here, sometimes it doesn’t. I thought I hit the first ball better, but Kevin Mitchell didn’t move. So when I hit the home run, I just took off.”13

“I thought it was a good pitch when it left my hand,” Reuschel said. “I got him out on soft stuff the first time, and I threw him a changeup on the first pitch the second time. Then I tried to sneak one by him.”14

Steinbach was not known as a home-run hitter, hitting just seven during the season. But he seemed to have a knack for hitting a homer when it counted. It was his home run in the 1988 All-Star Game off Dwight Gooden that helped to give the American League a 2-1 victory. Steinbach was rewarded with the MVP trophy for knocking in both American League runs.

Before the game, La Russa called the shot when he predicted that “Steinbach would hit a home run off Reuschel,” noting Reuschel’s tendency to throw low pitches and his catcher’s tendency to hit low pitches a long way. Later, La Russa downplayed his prediction saying, “I said something like that, but if the truth be known, I say those kind of things every game.”15

Reuschel finished the fourth but he was not able to get an out in the fifth before Craig pulled him. Asked later to comment on his starter, Craig responded sarcastically: “He’s 6-3, weighs 260,” before saying, “I thought he might have been trying to be too fine because he normally doesn’t walk that many guys. But he’s been my best pitcher since he’s been over here.”16

Kelly Downs kept Oakland from scoring through the sixth. His bullpen mate Craig Lefferts did the same in the seventh. Lefferts gave up a one-out triple to Rickey Henderson, but a pair of groundouts left Henderson stranded on third. Steve Bedrosian took over in the eighth and got the A’s out in order.

Meanwhile Moore set down 12 of the final 14 Giants he faced. La Russa pulled him when he gave up a leadoff single to Ken Oberkfell in the eighth. Moore later credited his pitching coach for helping him develop a methodical approach to his game. “I just tried to approach this game like any other game,” he said. “Make the first pitch a strike and get some zeroes on the board. They’re a good-hitting ballclub.”17

Rick Honeycutt set the three Giants he faced down in order. He was replaced by Dennis Eckersley with one out in the ninth. Eckersley got Kevin Mitchell to pop out to third and Matt Williams to ground out to second to end the game. Williams, who hit .300 in the NLCS with a record nine RBIs, the most in a five-game series, was frustrated with his performance. But when asked about his inability to hit in the World Series, he barked back to the reporter, “Oh, so you’re trying to say that the pressure is bothering me? No. Two games don’t make a Series.”18

Craig was asked about his team’s chances as the Giants prepared to head across San Francisco Bay to their home ballpark. “The Series is not over by a long shot, as much as people say it is,” he said. “It ain’t all bad, men. We got a run and we don’t get to see those fellas again until Tuesday.” But Oakland was clearly in command of the series. In the 24 times that the home team had won the first two games, it went on to win the World Series 20 times.

In addition to the sources cited in the Notes, I used the Baseball-Reference.com and Retrosheet.org websites for boxscore, player, team, and season pages, pitching and batting game logs, and other pertinent material.

5 Quinn also appeared in the 1930 World Series at the age of 47 but he was a reliever in that Series. As of the end of the 2019 season, the second-oldest pitcher to start a World Series game was Jamie Moyer, who started Game Three of the 2008 World Series just before his 46th birthday.”

11 Mike Penner, “A’s Get Moore of Same, Keep Giants at Bay,” Los Angeles Times, October 16, 1989: C19. Some newspaper accounts said the umpires had to “grab a turkey, which had apparently been let loose from the stands.” Murray Chass, “How It Happened; Bottom of Lineup Sparks A’s,” New York Times, October 16, 1989: C6. The Associated Press said, “[A] fan dropped a guinea hen onto the field, near the spot where Parker doubled. The fowl scampered into fair territory before it was caught.” Associated Press, “A’s Give Giants Moore Headaches,” Sacramento Bee, October 16, 1989: F14.