This article was written by Tim Korey 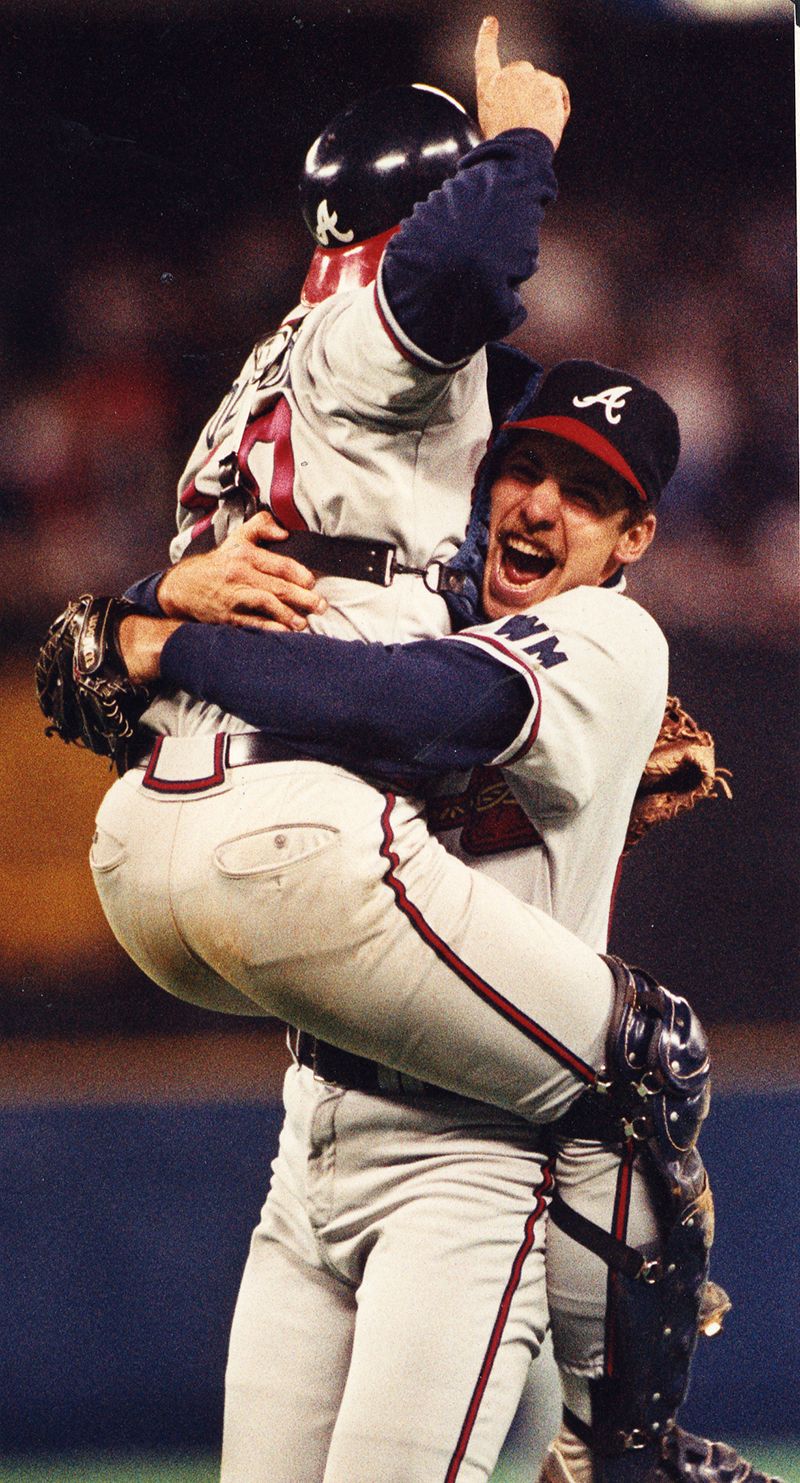 The 1991 Atlanta Braves (94-68) were the surprise of the National League, putting to rest a dreadful six-year stretch of losing at least 89 games each season. Fighting their way back from a 9½-game deficit to the Los Angeles Dodgers at the All-Star break, the Braves clinched the West Division crown on the next-to-last day of the regular season.

Atlanta’s 1991 resurgence can be traced to the hiring of general manager John Schuerholz. The architect of the 1985 World Series champion Kansas City Royals, Schuerholz brought with him to Atlanta not only an eye for talent, but a needed change in culture to the entire Braves organization. In an effort to instill respectability and leadership to the once-proud franchise, and to deliver an improved product on the field, Schuerholz signed former Pirates first baseman Sid Bream and two-time Gold Glove award-winning third baseman Terry Pendleton via free agency after the conclusion of the 1990 season. Partnered with these key acquisitions was the development of a cadre of young talent under manager Bobby Cox, including the reigning National League Rookie of the Year, right fielder David Justice, dynamic outfielder Ron Gant, and the driving force of the 1991 team: young left-handed starting pitchers Tom Glavine and Steve Avery, as well as fireballing righty John Smoltz.

Jim Leyland’s Pittsburgh Pirates (98-64) finished a comfortable 14 games ahead of the second-place St. Louis Cardinals enroute to winning the 1991 National League East Division. The outfield trio of Andy Van Slyke, Bobby Bonilla, and Barry Bonds sparked the Bucs’ potent offense during the regular season, during which the team ranked first in the league in doubles, RBIs, home runs, batting average, and on-base percentage.

The focus come playoff time, however, would once again be on the Pirates’ “Big Three” and their lack of offensive production in October. During the previous year’s League Championship Series, the combination of Van Slyke, Bonilla, and Bonds had batted a meager .190 (12-for-63) with no home runs and five RBIs. With rumblings that key pieces of the team could depart via free agency, the 1991 campaign represented possibly the last shot for the core of the team to win a World Series ring.

After falling behind two games to one in the series, the veteran Pirates won Games Four and Five at Atlanta Fulton County Stadium, putting them one victory away from their first World Series appearance since 1979. Facing elimination, the Braves pulled even in the series with a thrilling 1-0 Game Six win in Pittsburgh, setting the stage for a winner-take-all seventh game on Thursday night, October 17, at Three Rivers Stadium.

Smoltz, winner of Game Three on October 12, relished the chance to start the final contest of the NLCS. “I don’t want this season to end,” he said. “I want to keep pitching. I just hoped my teammates would give me a chance.”1 Meanwhile, Pirates starter John Smiley was looking to rebound after being rocked in Game Three, when he surrendered five runs (four earned) in just two innings in Pittsburgh’s 10-3 loss.

Before the decisive game, the Braves appeared to be the much calmer club. So calm, in fact, that Bobby Cox chose not to call a team meeting, stating, “We know what we have to do. Everybody is ready for this.” While Smoltz admitted that he was nervous, he was serene compared to Smiley, who rarely stopped pacing before the game.2

Perhaps nerves played a part in the uncharacteristically shaky performance Smiley delivered in the opening inning. Despite issuing only five first-inning walks during the regular season, second best in the National League, he let Braves leadoff hitter Lonnie Smith fight back from a 1-and-2 count to draw a leadoff base on balls. Terry Pendleton followed with a sharp groundball single that kicked off the glove of second baseman Jose Lind to put runners at the corners with no one out. Knowing a repeat of Smiley’s disastrous Game Three outing would be a difficult hurdle to overcome, Pirates manager Leyland got his bullpen stirring, having starters Bob Walk and Randy Tomlin loosen up.

As the first appearance of the Braves’ tomahawk chop began to ripple through Three Rivers Stadium, Smiley turned his attention to Ron Gant. Gant, looking for his first hit of the series with runners in scoring position, one-handed a 3-and-2 fastball to deep left field, pushing Pittsburgh left fielder Barry Bonds to the base of the wall before he made the catch. Smith scored on Gant’s sacrifice fly, giving the Braves a quick 1-0 lead. Smiley recovered to strike out cleanup hitter David Justice on a 2-and-2 fastball, placing him one out away from escaping major damage.

Braves rookie Brian Hunter then stepped in. Atlanta’s eighth-round selection in the 1987 draft, Hunter wasted no time in making his mark this night, hammering Smiley’s first-pitch fastball deep into the left-field stands for a two-run homer, giving the Braves a 3-0 advantage. After Greg Olson smacked a single past diving third baseman Steve Buechele to extend the frame, Leyland called on his bullpen, ending Smiley’s night after just two-thirds of an inning. The veteran Walk entered the game and got Mark Lemke to hit a groundball to shortstop Jay Bell for the final out of the inning on an unassisted force at second base.

Staked to a 3-0 lead, Smoltz took the mound in the bottom of the first and quickly surrendered a leadoff single to Orlando Merced, followed by a sharp liner by Jay Bell that fell safely in center field. With the Pittsburgh crowd of 46,932 coming alive, Andy Van Slyke settled into the left-hand batter’s box, looking to snap the Pirates’ 3-4-5 hitters out of a collective 0-for-30 slide with runners on base in the series. After working the count in his favor, Van Slyke rocketed a 2-and-1 fastball to deep right field, chasing Justice to the wall. When the ball settled into Justice’s glove for the first out but deep enough to move Merced to third base, Van Slyke couldn’t help but express his frustration, jumping up and down in disbelief as the catch was made. Said Smoltz of Van Slyke’s liner, “That was a huge out. Now I just wanted to limit the damage. Just don’t let them get two runs.”3

With runners on the corners and one out, Smoltz managed to work out of the jam on six more pitches by inducing a soft popup by Bonilla for the second out and getting Bonds to ground out to second to end the threat.

After the first-inning fireworks, Walk and Smoltz settled into a groove with neither allowing a run until Walk ran into trouble in the top of the fifth. Going into his fourth inning of relief, Walk retired the first two Braves hitters, Smith and Pendleton, in routine fashion before walking Gant. With Justice at the plate, Gant added to his NLCS record for stolen bases, swiping his seventh bag of the series. Walk then pitched around the left-hand-hitting Justice, putting men on first and second with two away. But Hunter pounced on a 1-and-1 curveball, sending it bouncing down the left-field line for a run-scoring double, his third RBI of the game. Walk rallied to strike out Olson, but the Braves now carried a four-run lead with the game at the halfway point.

Meanwhile, Smoltz was on cruise control through the middle frames, facing only 13 hitters through the fifth, sixth, and seventh innings. Still holding a 4-0 lead into the bottom of the eighth, he faced his final test of the night. Bell smashed a one-out single under the glove of Braves shortstop Rafael Belliard, which ignited the home crowd. After Van Slyke continued his frustration by striking out on a curveball, Bonilla hit a blooper into shallow right field, allowing Bell to advance to third. With runners on the corners and two outs, Bonds had the opportunity to exorcise his playoff demons and bring home the first Pirates runs since the fifth inning of Game Five. But on the first offering from Smoltz, his 109th of the night, Bonds flied out harmlessly to left field, ending the would-be rally and deflating Pittsburgh’sfans.

Smoltz finished up the shutout as well, setting the Pirates down on 14 pitches in the ninth inning. The win gave the Braves their first National League pennant since 19584 and punched their ticket to the World Series, where they faced the American League champion, and worst-to-first brethren, Minnesota Twins.

In addition to the Sources cited in the Notes, the author used the Baseball-Reference.com and Retrosheet.org websites for player, team, and season pages and the box scores for this game.

4 The Braves were still in Milwaukee when they won the 1958 NL pennant. The team moved to Atlanta for the 1966 season.