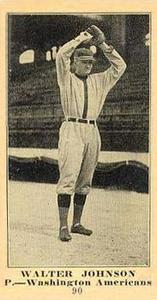 As the 1917 season reached its next-to-last day on October 3, the Boston Red Sox, winners of the American League pennant and World Series in the two previous seasons, were in second place, eight games behind the Chicago White Sox, who had dethroned the Red Sox and wrapped up the pennant a week earlier. The Washington Senators, who were bound for fifth place, were 26½ games behind Chicago. Washington had split a doubleheader with the Red Sox on October 2.1

Baseball offered little to look forward to beyond the coming World Series between the White Sox and New York Giants, but the October 3 schedule did provide a reason for fans to come to Fenway Park: a marquee pitching matchup between Washington’s Walter Johnson and Boston’s Babe Ruth.

Both pitchers were wrapping up seasons placing them on AL leaderboards in many categories. Johnson’s 188 strikeouts gave him his seventh title in eight seasons; Ruth’s 35 complete games paced the AL. By Baseball-Reference.com’s Wins Above Replacement, a twenty-first-century metric, Johnson was the AL’s fourth most valuable pitcher with 7.0 WAR, and Ruth was fifth with 6.5.

This was the seventh meeting since 1915 between the 11-year veteran Johnson and his nemesis Ruth. In six previous matchups, Johnson had yet to secure a win.2 They had faced each other once before in 1917, and Ruth outdueled Johnson for a 1-0 win on May 7 in Washington for Ruth’s fourth 1-0 win in their games.3

In a sign of the times, several thousand soldiers, sailors, and Marines had attended the previous day’s doubleheader, three months after the United States’ first infantry troops landed in France to fight in the World War.4

For the first three innings neither team put a run on the scoreboard. Washington’s Clyde Milan singled off Ruth with two outs in the first but was caught stealing. “It was a close decision, and Zeb [Milan] laid in the dirt protesting until he was chased to the outer garden,” the Washington Post observed.6

In the second, Ruth allowed a one-out single to Patsy Gharrity and hit Howie Shanks with two outs, but Eddie Ainsmith hit into a force play to end the inning.

Johnson, meanwhile, limited the Red Sox to one hit through three innings. Duffy Lewis, at the end of an eight-season tenure as Boston’s left fielder, singled in the second but was caught stealing.7

The Senators broke through against Ruth in the fourth. Gharrity led off with a single to center and made it to third when Tillie Walker misplayed it for an error. “Tillie Walker played Gharrity’s hit very carelessly in the fourth,” the Boston Globe commented.8

Boston brought the infield in, and Ray Morgan singled sharply past shortstop to drive in Gharrity with the game’s first run. After Shanks singled, Ainsmith doubled to left-center, all the way to the “left-field stockade,” driving in Morgan and Shanks for a 3-0 Washington lead.9

Pitching with the lead, Johnson scattered hits in the middle innings. He stranded Jimmy Cooney, a rookie playing in his 10th major-league game, after a double in the fourth. Walker singled to left in the fifth but tried to stretch it into a double, and Mike Menosky, Washington’s left fielder, threw him out at second. Another Walker single in the seventh was also fruitless.

Johnson put the game away with his bat in the eighth. Morgan drew a two-out walk and Shanks singled him to second. They advanced on a wild pitch, and Ainsmith walked to load the bases for Johnson. Johnson cleared the bases with a double – one of only two hits in 24 career at-bats against Ruth – giving the Senators a commanding 6-0 lead.

All that was left for Johnson to wrap up his first win over Ruth was the final two innings. He pitched around Ruth’s single for a scoreless eighth. In the ninth, two hits and a walk loaded the bases with two outs, but Everett Scott hit a fly ball to left, and Menosky “came in fast to make the prettiest of shoetop catches,” preserving the shutout and ending the game.10

Afterward, the 101st Infantry honored Johnson by giving him a silver cup for winning the game. “Walter Johnson was at his best yesterday, shutting out the fading champions and then taking the silver cup which was offered by the associate members of the 101st Regiment Association for the winner of the battle between Sir Walter and ‘Babe Ruth,’” the Boston Globe reported.11

“Johnson finished off the day and his 1917 season by making a speech after the game upon being presented with the cup,” the Washington Post wrote. “All of which made for a record day for him.”12

The shutout was the eighth of the season for Johnson and the 71st of his career. In defeating Ruth for the first time in seven career starts, he allowed seven hits while walking three and striking out four.

“The veteran was in rare form,” the Washington Post concluded of Johnson. “He had the Sox at his mercy throughout. … The former champions knocked only ten balls out of the infield on him.”13

Johnson finished the year with a record of 23-16 and a 2.21 ERA, ending a string of four seasons in which he led the American League in wins. Washington came in at 74-79, 25½ games behind the White Sox.

As for the Babe, he finished the year with a record of 24 wins and 13 losses and a 2.01 ERA. The Red Sox ended at 90-62, placing them second, nine games back of the White Sox. In 1918 Boston began to use Ruth as a first baseman or outfielder alongside his mound work, and his pitching appearances decreased by more than half, from 41 to 20. Most of his subsequent battles with Johnson were from the batter’s box, not as a pitching opponent.

3 This series of games covers only games in which Johnson and Ruth started against each other with one of the two gaining the decision.

7 After spending the 1918 season in the US Navy, Lewis, who had played on three World Series championship teams in Boston, was traded to the New York Yankees in December 1918.

13 “Johnson’s Victory Is the Twenty-Third He Has Placed to His Credit This Season,” Washington Post, October 4, 1917: 8.