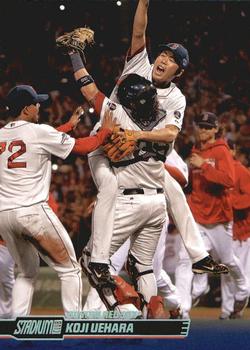 The year after a last-place finish in 2012, the Boston Red Sox in 2013 were in position to win the World Series at Fenway Park in Game Six, having taken both Games Four and Five in St. Louis to seize a three-games-to-two lead. They had won it all in 2004 and 2007, but both clinchers were on the road. Win Game Six — or a possible Game Seven on Halloween — and they would win the World Series at home for the first time since 1918.

This was the year of the Boston Marathon bombing in April. David Ortiz and the resurgent Red Sox symbolized “Boston Strong” — the way the city as a whole pulled together in the wake of the bombing.

On the offday, October 29, the Cardinals charter was delayed leaving St. Louis for a full seven hours. The players said they enjoyed themselves aboard and claimed it may have boosted team unity in some ways.

The game featured the same matchup as in Game Two — John Lackey for Boston and Michael Wacha for St. Louis. With the DH restored in the American League park, Mike Napoli was back in the lineup. Shane Victorino returned after missing the two previous games with a back injury.

With his win in Game Two at Fenway, the 22-year-old rookie Wacha was 4-0 in the postseason, allowing a minuscule .122 opponents’ batting average. Lackey had given up only three runs in Game Two, but they were one too many; he bore the 4-2 loss. Lackey was never a fan favorite in Boston but he was a competitor.

Lackey retired all three batters in the top of the first. Wacha pitched around Ortiz and walked him, but otherwise had no difficulty in the bottom of the inning. The first two batters Lackey faced in the second each singled. After getting a couple of outs, he threw a wild pitch. But he struck out Jon Jay and escaped any damage.

Jonny Gomes singled to lead off the Red Sox second, and Victorino walked, so the Red Sox had a threat of their own, but Wacha got back-to-back foul popups from Xander Bogaerts and Stephen Drew and struck out David Ross, keeping the game scoreless.

Matt Carpenter singled with one out in the top of the third, but Carlos Beltran hit into a double play.

Jacoby Ellsbury singled between first and second to start the third inning for Boston. Dustin Pedroia’s broken-bat groundball to third moved Ellsbury into scoring position. Ortiz was up. With the open base, he was walked intentionally. Napoli struck out for the second out. Wacha hit Gomes with a pitch, loading the bases.

Victorino cleared the bases. He already had two grand slams in postseason play, with the Phillies in 2008 and the Red Sox in the 2013 ALCS. He was 2-for-23 in the ALCS before his Game Five slam and was now 0-for-10 in the World Series. He was a fan favorite; as he came to the plate, most of Fenway loudly sang his walkup music — Bob Marley’s “Three Little Birds,” with its words “Every little thing gonna be all right.”

On a 2-and-1 count, Victorino hit a ball more than two-thirds of the way up and off the Green Monster in left field, likely a home run in any other park. Ellsbury and Ortiz scored easily on the double, and Gomes beat the relay home for the third run. The Red Sox had a 3-0 lead.

Allen Craig singled for the second time in the top of the fourth and Yadier Molina reached on an error, but the Cardinals couldn’t score.

In the bottom of the fourth, Boston shortstop Stephen Drew (with one hit in 16 at-bats) homered on the first pitch, lifting it into the Red Sox bullpen in right. Ross struck out. Ellsbury doubled off the warning track in right field. Pedroia flied out to right, Ellsbury tagging and going to third. Mike Matheny wasn’t taking any chances with Big Papi; Ortiz was intentionally walked again.

Wacha had finally hit a wall, and Lance Lynn relieved him with Mike Napoli at bat. The Red Sox first baseman looped a solid single into right field, scoring Ellsbury to make it 5-0. Gomes walked, loading the bases. Victorino was up again. He singled to left field. That gave him 20 RBIs when batting with the bases loaded in his postseason career. His World Series batting average was .154 but he had four RBIs in this game.

Lackey had a 6-0 lead. He allowed a couple of singles in the top of the fifth but no runs.

Kevin Siegrist saw Ellsbury reach on an error in the fifth, but he advanced no farther. Lackey retired the side in the top of the sixth. So did the combination of Siegrist (who struck out Ortiz) and Carlos Martinez in the bottom of the inning.

In the top of the seventh, Lackey struck out David Freese on three pitches. Jon Jay grounded out on the first pitch. Then Lackey hit some difficulty. Daniel Descalso singled over first base. Carpenter doubled past Bogaerts at third base and into the left-field corner. Carlos Beltran beat a shift by slapping a ball into left for a single to drive in St. Louis’s first run. After a wild pitch, and then a walk to Matt Holliday, manager John Farrell brought in Junichi Tazawa. He got Craig to ground out. The score was 6-1.

Drew singled in the bottom of the seventh. He was the only one to reach base.

Brandon Workman set down St. Louis one-two-three in the top of the eighth.

David Ortiz came up one last time in the bottom of the eighth. He was walked intentionally. For the game, he was 0-for-1 — the sixth-inning strikeout with nobody on base — and had four bases on balls. The Cardinals were taking no chances with Big Papi. They “treated him like he was rabid.”2

Koji Uehara pitched the top of the ninth, facing the minimum — two fly outs to left field and a strikeout of Carpenter to wrap up the World Series.

Lackey was, of course, the winning pitcher. It was the second time he had won the clinching game of a World Series. He’d done so for the Angels back in 2002. Manager John Farrell, well aware of Lackey’s struggles in Boston (and the team’s last-place finish in 2012), said, “His turnaround mirrors that of this organization.”3 This hadn’t been the Impossible Dream of 1967. This was the “Unthinkable Dream.”4

The Boston Globe’s Dan Shaughnessy said the Red Sox had left spring training in Fort Myers saying, “Please don’t hate us.” They’d won only 69 games in 2012, and there was really no indication of the year that 2013 turned out to become. He quoted the Gospel of Luke in the Bible: “For behold, some are last who will be first. …”5 There was Marathon Monday. And in the end, the Red Sox won it all.

Shaughnessy called it “the ultimate civic comeback story” and quoted John Farrell at some length: “I go back to our players understanding their place in this city. They kind of, for lack of a better way to describe it, they get it. They get that there’s, I think, a civic responsibility, that we have wearing this uniform, particularly here in Boston. And it became a connection. … I’m sure that everybody in our uniform, whether they are here going forward or elsewhere, they’ll look back on the events that took place and the way things unfolded as a special year. There’s no way we can say it any other way.”6

“When we needed the big hit, we couldn’t get it,” Cardinals second baseman Carpenter said. Bernie Miklasz wrote, “The Cardinals’ failure was too reminiscent of 2004, when the Red Sox swept the Cardinals in four. Oh, the Cardinals won two games this time — thanks to Boston throwing away Games 2 and 3. But it wasn’t close to being good enough.”7

Boston’s pitching had held. One St. Louis writer opined, “Boston assured its championship by fending off the final gasps of the Cardinals’ vaunted offense, one that led the National League in scoring but got colder quicker than the weather did.”8 The Cardinals, he added, had hit .330 with runners in scoring position during the regular season — best in baseball — but mustered only three hits in their final 21 opportunities, and 1-for-9 in Game Six.

The Red Sox had won their third World Series in the still-new century. And won it at home for the first time in 95 years.

Ortiz was named the Series MVP. In 25 World Series plate appearances, he had reached base 19 times. His batting average of .688 (11-for-16) was the highest in World Series history, with eight bases on balls giving him a .760 on-base percentage. He drove in six runs and scored seven (two on his own home runs).

1 And winning the “most invisible player” award was St. Louis starting pitcher Shelby Miller, a 15-game winner who pitched one inning in the Division Series, and never again, being held for a situation that apparently never arose. Rick Hummel, “106 Wins Are Not Enough,” St. Louis Post-Dispatch, October 31, 2013: W6.