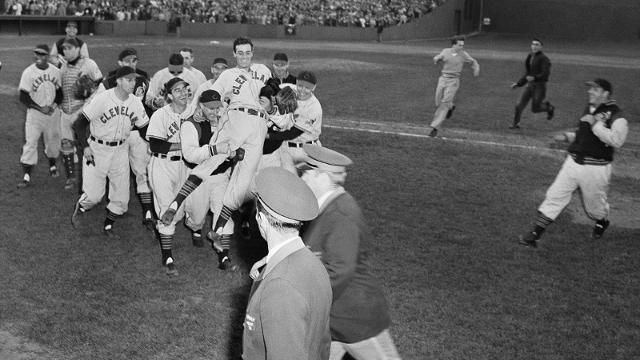 When the American and National Leagues expanded from eight to 12 teams in the 1969, each league split into two divisions, the East and the West. The division winners would face each other in the League Championship Series to determine the league representative in the World Series.

The new alignment in effect replaced the term “pennant race” with “division race.” When the leagues expanded again in later years, the term “wild-card race” was also added to the vernacular. The extra layers of playoffs, naturally created the opportunity for more fans to enjoy the thrill of October baseball.

Baseball history is rich with stories of late-inning heroics in late-season games that shaped the outcome of a good old pennant race. That is certainly true of the American League in 1948. At the end of play on September 30 the New York Yankees and Boston Red Sox each trailed the Cleveland Indians by 1½ games. The Yankees would close the season with a two-game set at Fenway Park while Cleveland entertained Detroit in a three-game series.

The Tribe had to feel good about their chances, as 20-game winner Bob Lemon was on the hill against Virgil Trucks. But the Tigers topped the Indians, 5-3, on Friday while the Yankees and Red Sox were idle, reducing their deficit to a single game. Cleveland righted the ship against Detroit the next day, as rookie sensation Gene Bearden won his 19th game, shutting out the Tigers 8-0. Boston toppled New York, 5-1, eliminating the Yankees from the race to grab the AL flag.

On the final day of the season, Boston smacked the Yankees, 10-5. At Cleveland, Bob Feller gave up four runs in the third inning to the Tigers, and the Cleveland bats went silent. Hal Newhouser won his 21st game as Detroit coasted to a 7-1 win before 74,181 fans at Cleveland Stadium. “The only bells heard in Cleveland late yesterday were the church bells calling the devout to prayer,” wrote James Doyle of the Cleveland Plain Dealer in the next morning’s edition.1

The American League was going into unchartered waters, as the first playoff tiebreaker game was on the horizon. Cleveland and Boston ended the season with identical 96-58 records. Furthermore, they had split their season series, with each team winning 11 games. The American League had decided to incorporate a one game, winner-take-all playoff. Their counterparts in the National League went with a best-of-three format. The NL held their first playoff games in 1946 with St. Louis besting Brooklyn in two games. As the result of a coin toss held in Chicago the week before, Boston won the home-field advantage for the game. The Red Sox were a force at Fenway Park, posting a 55-22 record, including 6-5 against Cleveland. “Fenway Park, where it has been said, the Red Sox eat their young, is a structural monstrosity that through the years has proven to be a dreaded nightmare to its visiting baseball clubs,” noted a Cleveland sportswriter.2 That assessment proved true to the oddsmakers, who made Boston a 6-5 favorite to be victorious.

Boston fans were filled with excitement. The Boston Braves had long ago claimed the NL pennant, and an all-Boston World Series certainly seemed better than a 50-50 proposition. The Braves had a workout at Braves Field in the morning, and many players were going to head over to Fenway to catch the Indians-Red Sox game and perhaps do a little advance scouting.

Both of the managers, Boston’s Joe McCarthy and Cleveland’s Lou Boudreau, were playing it close to the vest as to naming a starting pitcher. Each manager had a several choices. But each manager’s decision raised some eyebrows. Boudreau selected his talented left-hander, Gene Bearden (19-7, 2.53 ERA). Many believed that starting a left-handed pitcher in Fenway Park could prove fatal, as the Red Sox would be sure to stack their lineup with right-handed batters and take advantage of the short distance to left field. Not to mention, Bearden was a rookie and making the most crucial start of the season on one day’s rest. “I wasn’t concerned about his pitching with only one day’s rest,” said Boudreau. “He’s that type. You can’t keep him off the mound. After pitching Saturday, he was in the bullpen yesterday.”3

His counterpart was right-hander Denny Galehouse (8-8, 4.00 ERA) Many expected McCarthy to go with Mel Parnell or Ellis Kinder. But Marse Joe selected Galehouse to pitch the Red Sox to the fall classic. McCarthy was pinning his hopes that Galehouse would be able to use his pinpoint control to top the Indians. Galehouse was 1-1 with a no decision against Cleveland in the regular season

The two clubs swapped runs in the first inning. Boudreau slammed a homer into the screen above the left-field wall. Boston answered in its at-bat as Johnny Pesky hit a one-out double to right-center field. He scored the tying run two batters later when Vern Stephens singled down the left-field line.

The score stayed tied until the fourth inning. Boudreau led off with a single to left field, and Joe Gordon followed suit. Ken Keltner stepped to the plate and teed off on a 2-and-2 pitch. The result was a homer into the screen above the left-field wall. It was the 31st home run of the season for Keltner.

Galehouse was given the hook and was replaced by Ellis Kinder. Larry Doby greeted Kinder with a double to left-center field, and went to third base on a sacrifice bunt by Bob Kennedy. He then scored on a groundout to short by Jim Hegan. The Indians held a commanding 5-1 lead. Their lead grew to 6-1 when Boudreau smashed his 18th home run of the season into the screen in the top of the fifth inning, a carbon copy of the one he hit in the first inning.

Meanwhile Bearden was pitching superbly. He ran into a bit of trouble in the bottom of the sixth, when Gordon dropped a pop fly off the bat of Ted Williams. Bobby Doerr connected for his 27st homer of the season, to cut the deficit to 6-3. Both runs were unearned.

But the Red Sox were running out of innings. Over the final three frames, Bearden surrendered one hit. Over the last seven innings, he gave up two safeties. The Tribe added single runs in the eighth and ninth innings to make the final score Cleveland 8, Boston 3.

Bearden won his 20th game of the year and was carried off the field by his teammates. He had surrendered just five hits, struck out six, and walked five. The Indians decided on their choice for the starter on Sunday. “We had a meeting in the clubhouse,” said Boudreau, “and we decided upon our pitcher at that time. I wasn’t trying to be smart in not naming him. I just wanted to give him a break. If I said that Bearden was going to pitch, you newspapermen and photographers would have swarmed all over him.”4The rookie hurler mixed a wicked slider with a knuckleball to keep the Red Sox off balance. “He pitched a great game, but it wasn’t his best of the season,” said Hegan. “He has a very effective knuckler – sometimes it breaks down and sometimes it breaks in. When he pitches, the infielders get a lot of assists and make several double plays because batters hit the knuckler into the dirt.”5

“Give credit where credit is due,” said Doerr. “Bearden was great. He had all kinds of stuff. That he could come back with so much stuff after only one day of rest was remarkable.”6

The Indians were installed as 13-5 favorites to top the Braves in the World Series. They didn’t disappoint their fans, winning in six games. Bearden continued his outstanding pitching. He shut out the Braves in Game Three, 2-0. He was also credited with a save in the decisive Game Six. It was the Indians’ second World Series championship in 28 years, and as of 2016 the franchise’s last one.

Some of the players’ wives had attended the game. They noticed that as the Indians began to take control of the game, the Red Sox fans became more incensed. “We were all so happy, but we had to keep quiet,”7 said Claire Hegan. When the game ended, Sandy Harder, wife of Indians pitching coach Mel Harder, broke into tears of happiness. Thinking that her tears were of sadness, a Boston fan said to her, “Don’t worry lady, we’ll get them next year.”

In addition to the sources mentioned in the Notes, the author consultedbaseball-reference.com, mlb.com, and retrosheet.org.