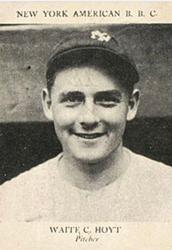 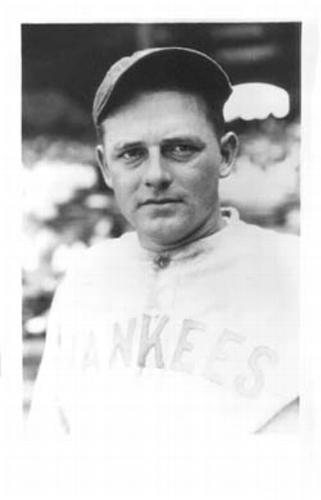 “The Western Front is now a somber memory of half-filled trenches and grass covered dugouts, where only forgotten ghosts and rain washed crosses remain.”1

“But from the glory of Verdun Colonel Tillinghast Huston of the 16th Engineers, brought back this slogan and rammed it down the throats of his world series ball club: ‘They Shall Not Pass!’ Carl Mays and his mates responded nobly to this slogan on Wednesday. And yesterday young Waite Hoyt of Brooklyn, hardly more than a mashie shot from his school desk at Erasmus High, tied the Giants into a row of true lovers’ knots, while forty thousand fans again looked on in wonder at the unwavering stanchness of the Yankee defense.”2

Isaac Shuman wrote in New York’s Evening World, “As early as 11 o’clock all indications pointed to more excitement than yesterday. The sun was hotter. The early arrivals rushed to choose the sunny and warm sides of the stands and bleachers. A band soon stirred the fans into the emotional state of excitement called anticipation.”3

A New York Times account said, “It was a great game of baseball that the fans saw from the time that Governor Miller formally started the proceedings by tossing a brand new ball to Wallie [sic] Pipp at 2:10 o’clock to the last out, when the mighty George Kelly batted into a double pay, smashing the hopes of McGraw.”4

The 34,939 fans in attendance saw Hoyt set the Giants down in order in the first inning on a strikeout of George Burns and two groundouts, by Dave Bancroft and Frankie Frisch. Elmer Miller opened for the Yankees and worked Nehf for a walk. He went to second base on a groundout by Roger Peckinpaugh. Babe Ruth drew a walk, but the inning ended on a line-drive double play by Bob Meusel.

It was another one-two-three inning for Hoyt in the second and Nehf issued his third walk of the game, to Wally Pipp, leading off the bottom of the inning. A groundout, a fielder’s choice by Mike McNally (Pipp was out at third base), and McNally’s caught-stealing ended any threat the Yankees had of scoring.

Hoyt allowed his first hit of the game, a single by Johnny Rawlings, to open the third, but that was all the Giants could muster. Hoyt had a one-out single for the Yankees and after Miller’s fly out, Nehf walked his fourth batter, Peckinpaugh, and then his fifth, Ruth, to load the bases with two outs. Meusel ended this threat as well with a pop fly to the Giants shortstop, Bancroft, and the game remained 0-0.

Hoyt got the side out in order in the top of the fourth. For the Yankees, Aaron Ward hit a single in the bottom of the inning. McNally reached on an error by Nehf attempting to get a force at second; Yankees were now at first and second. A walk to Wally Schang loaded the bases with Hoyt coming to bat. Hoyt, who was not a good hitting pitcher,5 hit a groundball to Rawlings at second base. Ward scored as Rawlings threw out Hoyt. McNally attempted to score from second but was thrown out at the plate by High Pockets Kelly for the final out of the inning. The Boston Globe explained, “Hoyt’s ball bounded past Nehf and Ward scored as Hoyt was being thrown out at first. McNally then tried to score on the same play but was caught on Kelly’s return to the plate.”6

Two groundouts for the Yankees began the bottom of fifth inning and then Ruth walked. With Meusel at the plate, Ruth stole second base and then third. He was left there when Meusel grounded out.

Hoyt kept the Giants at bay, with the only hit being the leadoff single by Rawlings in the third inning. In the bottom of the eighth inning, Peckinpaugh reached on an error by Frisch on a pop fly to third base. Ruth’s groundball forced Peckinpaugh at second base. Ruth went to third on Meusel’s single and scored on Pipp’s grounder to second base, with Meusel taking third. With Ward at bat, Meusel stole home, the third stolen base of the game for the Yankees. Ward fouled out to first base to end the inning with the Yankees now leading, 3-0.

After Bancroft grounded out leading off the top of the ninth, Hoyt allowed a single to Frisch, just the second Giants hit of the game. Hoyt then walked Ross Youngs for the first real scoring threat of the game for the Giants. The threat ended when the next batter, Kelly, grounded to third for a game-ending double play, That gave the Yankees a commanding 2-0 lead in the best-of-nine race for World Series glory.

Yankees shortstop Peckinpaugh summed up after the game: “After all, there is little to say about the game beyond Hoyt’s splendid pitching. He required little support at the bat and he got more than enough – little though it was. The breaks, of course, were against Nehf, and in this respect he was very fortunate. Except for the seven bases on balls he gave, he pitched beautifully. I imagine it was the most heartbreaking experience of Nehf’s pitching career. Everything seemed to go wrong for him, but he pitched with a fine show of courage and lost. The old rule proved true. We got the breaks and for the second time in two days we won.”7

In addition to the game story and box-score sources cited in the Notes, the author consulted the Baseball Reference.com and Retrosheet.org websites.