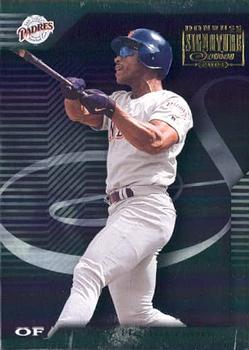 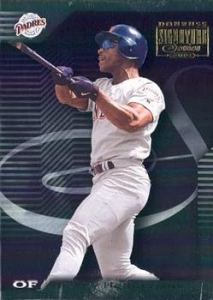 Americans will always remember 2001 for the terrorist attacks that were perpetrated on US soil on September 11 of that year. Although baseball seemed trivial in the immediate aftermath of that day’s events, President George W. Bush – in a decision reminiscent of President Franklin Roosevelt’s “green light” letter during World War II – encouraged major-league baseball to play out the season. Thus, baseball provided a diversion for a troubled country, culminating in a World Series between the Arizona Diamondbacks and New York Yankees that was not decided until the bottom of the ninth inning of Game Seven. Along the road to that climax, one of several other memorable moments was baseball’s all-time runs, steals, and walks leader, Rickey Henderson, becoming a member of the 3,000-hit club before a crowd of 60,103 at San Diego’s Qualcomm Stadium on October 7, the final day of the regular season.1

The game itself was meaningless, as neither the San Diego Padres nor the Colorado Rockies were playoff-bound. The sellout crowd was on hand to say goodbye to Tony Gwynn, who was set to retire upon the conclusion of the season. Gwynn had become “Mr. Padre” by spending his entire 20-year career with the team, amassing 3,141 hits, a .338 batting average, and eight NL batting titles. Gwynn later said about his last game, “My whole approach was just to have fun, but everybody kept coming up to me crying, and that made it hard. I wanted to have fun. It’s a celebration.”2

Though the fans had turned out to show their affection for Gwynn, he was reduced to a pinch-hitting role because of an injured right knee and was not in the starting lineup. Gwynn was happy to share his final game with Henderson, who had respectfully offered to bench himself so that the spotlight would remain on his teammate. Gwynn would have none of that, however, recalling in 2007 that Henderson had told him, “Rickey need to let you enjoy your last day in the big leagues,” to which Gwynn responded, “There are going to be 65,000 people in this ballpark tomorrow, coming to see you get your 3,000th hit, too, so I appreciate the thought, you know, but you gotta be out there tomorrow.”3

Henderson decided to play, and he started the game in his customary leadoff spot. When he came to bat in the bottom of the first, he wasted no time in giving the fans the thrill they had hoped for, as he hit Colorado starter John Thomson’s first pitch down the right-field line. Rockies first baseman Todd Helton, second baseman Terry Shumpert, and right fielder Mario Encarnacion all made a run at the fly ball, but it dropped onto the field for a double that made Henderson, who was playing in his 23rd season, the 25th major leaguer to accumulate 3,000 hits.

The game was delayed as the Padres rushed out of the dugout to congratulate Henderson, and Shumpert, who had fielded the ball on a bounce, handed it to him as a memento. A brief on-field ceremony was held in which Henderson received a plaque that commemorated his accomplishment. Dave Winfield, another member of the 3,000-hit club who was now on the Padres’ board of directors, also was present and gave Henderson a hug near the foul line. Henderson was known for being ostentatious – upon breaking Lou Brock’s career stolen-base record, he had held the base over his head and asserted his greatness to the crowd – but he was humble in describing his latest feat, saying, “It’s a great feeling, a feeling that you can’t really describe.”4 He also conceded, “I thought I would never get there because I walk so much. If you continue to play as long as I’ve been playing, you get the opportunity to do it.”5

Once the action resumed, Henderson added to his career-record run total. After D’Angelo Jimenez struck out and Ryan Klesko reached first on an error, Phil Nevin smacked a liner to right field that drove in Henderson for a 1-0 Padres lead. Thomson then struck out the side by getting both Bubba Trammell and Ben Davis on swinging strike threes; he went on to strike out 12 batters over seven innings of three-run ball to earn the win.

The Padres added to their lead in the bottom of the second when Cesar Crespo led off with a double and scored on Damian Jackson’s triple to left-center field. Padres starter Brian Lawrence contributed to his own cause with a sacrifice fly that gave San Diego an early 3-0 advantage. Unfortunately for Lawrence and the hometown fans in attendance, he did not help himself on the mound. He surrendered two runs in the third on a Juan Pierre home run that also scored Ben Petrick, but it was the fourth inning that would prove his undoing.

In the fateful fourth, Juan Uribe led off with a double and the next batter, Jacob Cruz, homered to give the Rockies a 4-3 lead. Encarnacion followed with a base hit but was retired on Petrick’s fielder’s-choice grounder to second base. When Lawrence struck out Thomson, it looked as though he might be able to limit the damage done. But Petrick stole second base and Pierre knocked him in with a single. After Pierre stole second and Shumpert drew a walk, Padres manager Bruce Bochy lifted Lawrence in favor of Chuck McElroy.

However, on this day, McElroy was a reliever in name only. With Helton at bat, Pierre stole third and then scored on a throwing error by the second baseman, Jackson. Rockies runners continued to circle the bases as Helton doubled, Jeff Cirillo singled, and Uribe hit a two-run homer. There was no consolation in the fact that McElroy brought the inning to an end by striking out Cruz, since the Padres were now in a 10-3 hole.

Although “It ain’t over ’til it’s over,” as Yogi Berra once said, the outcome of this game now seemed to be a foregone conclusion.6 Shumpert added another Rockies run with a solo homer in the sixth, the Padres scored two in the eighth (one on a Jimenez round-tripper), and Uribe added a three-run circuit clout in the ninth that finished the scoring in a 14-5 Colorado victory. Uribe was the game’s hero, going 3-for-5 with a double, two homers, three runs scored, and five RBIs.

The crowd still wanted to see Gwynn bat one last time, and Bochy obliged by sending him to the plate as a pinch-hitter for reliever Jeremy Fikac with one out in the bottom of the ninth. He hit Jose Jimenez’s first pitch to Uribe, who easily threw him out. Gwynn described the at-bat, saying, “I just hit it a hair forward instead of letting the ball get deeper. I just got out in front of it.”7

That Gwynn could describe in precise detail what had happened in his last plate appearance was par for the course for a player who probably remembered every single pitch he had ever seen in his career. Gwynn’s memory was on display prior to the game, when a radio reporter asked him to autograph a bat Gwynn had broken in 1987. Gwynn recalled the last hit he had made with that bat: “I hit a game-winning homer. Hanging curveball from Jesse Orosco.”8

After the game, another on-field ceremony was held, this time to honor Gwynn, who spoke to the crowd, saying, “It’s been unbelievable. Never in my wildest dreams did I imagine I’d be standing here after 20 years feeling good about a decision I made a year and a half ago. But I do. I feel I’ve done all I can do as a baseball player.”9 The Padres announced that their new ballpark, Petco Park, which was scheduled to open in 2004, would be located at No. 19 Tony Gwynn Drive. As a parting gift, Gwynn’s teammates presented him with a Harley-Davidson motorcycle that he could ride into retirement.