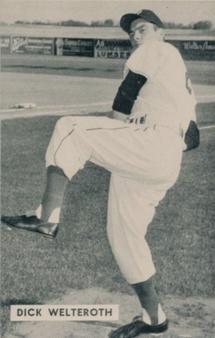 In 2020 the average nine-inning major-league baseball game lasted 3 hours and 7 minutes. In 1949 games were completed on average in 2 hours and 15 minutes.1 Yet on a mostly sunny September afternoon at Yankee Stadium in 1949, the New York Yankees batted for 50 minutes in the bottom of the third inning.

The reason? Four Washington Senators pitchers set a major-league record (that still stood in 2020) by walking 11 batters in the inning. The result: 12 New York runs on four hits (two singles and two doubles) and one error, and three men left on base. The Yankees were on their way to a 20-5 win in the first game of a doubleheader.

When the four-game series, consisting of back-to-back doubleheaders, began on September 10, the Yankees, leading the Boston Red Sox by 1½ games, were on course to capture their 16th American League pennant. The Senators, as was their wont, were mired in last place, 40 games behind New York. But the Senators managed a 4-3 win in the first game of the series; the Yankees responded with an 8-1 rout in the second game.

A crowd of 41,800 settled in to watch Washington’s Paul Calvert face New York’s Allie Reynolds in the first game of the September 11 doubleheader. They didn’t have to wait long for some excitement. In the bottom of the first, Phil Rizzuto led off with a walk and stole second. He went to third on Cliff Mapes’s fly out to center.

Bobby Brown grounded to second baseman Sherry Robertson, who threw home to get Rizzuto trying to score. Brown went to second and was called safe on a close play. So close, in fact, that Robertson argued vehemently enough with second-base umpire Jim Boyer to be tossed from the game. Joe DiMaggio walked, but Yogi Berra grounded out, ending the inning.

Calvert settled down in the second inning, striking out three batters around Jerry Coleman’s single. The game was scoreless as the history-making bottom of the third began.

Rizzuto and Mapes walked to lead off the inning. Bobby Brown drove in both runners with a double, giving the Yankees a 2-0 lead.

DiMaggio grounded to Eddie Yost, but the Nats’ third baseman threw high and wide past first. Brown scored and DiMaggio dashed to third on the error. New York led, 3-0.

That brought up Berra. His pop fly “dropped safely in short center with practically everybody in a Washington uniform in pursuit. Finding second base unguarded, Yogi steamed right into the bag for a double.”2 DiMaggio scored for a 4-0 advantage.

Reynolds blooped a hit to short left. Shortstop Sam Dente and left fielder Bud Stewart pursued it but collided, and the ball fell safely for a single. Keller and Collins scored. Coleman stopped at second. Seven Yankees had crossed the plate in the inning.

Stewart was carried off the field in a stretcher, but Dente walked off the field under his own power. Clyde Vollmer went to left; Mark Christman took over at shortstop for Dente.

With Rizzuto batting for the second time in the inning, Catcher Jake Early‘s pickoff throw to second trapped Coleman off the bag. Coleman was tagged in a rundown for the first out, but Reynolds took second on the play. Rizzuto singled to left, moving Reynolds to third.

After Mapes drew his second walk of the inning, Kuhel replaced Welteroth with Julio Gonzalez, a native of Cuba playing in what turned out to be his only season in the majors. Gonzalez walked Brown, forcing in Reynolds. New York’s lead was 8-0.

DiMaggio drove a fly ball deep to left, but Vollmer tracked it down for the second out. Rizzuto tagged up and came home for a 9-0 score, with Mapes advancing to second base.

Buzz Dozier, a 20-year-old, sunglasses-wearing right-hander who had previously pitched in two games for the 1947 Senators, replaced Gonzalez. He walked Coleman, the first batter he faced. It was the Yankees’ 11th walk of the inning, and Berra came home with their 12th run.

Dozier then got Reynolds — the 18th batter of the inning — to pop out to Eddie Robinson at first base, finally ending the frame. New York led, 12-0.

With the Yankees so far ahead, Kuhel left Dozier in to pitch the remainder of the game. The Yankees scored twice more in the bottom of the fourth inning. With two out, Brown singled. DiMaggio drove him in with a triple, and Berra’s RBI single made the score 14-0.

Two walks and a single loaded the bases in the bottom of the sixth inning. Keller drove in two runs with a single. Collins followed with a fly ball, making the score 17-0.

The Yankees tacked on two more runs in their half of the seventh. Reynolds and Rizzuto singled. One out later, Brown drove them in with his second double of the game. He finished the game with five RBIs.

With the score 19-0 after seven innings, Casey Stengel decided to rest Reynolds. He brought in Spec Shea to mop up. Coming off arm and neck injuries that caused him to spend time in Newark of the International League, Shea didn’t perform well. He allowed a run in the eighth on a bases-loaded walk to Mark Christman, breaking the shutout.

The Yankees responded with another run in the bottom of the eighth off Dozier, who went 5⅓ innings and allowed eight runs on 12 hits and five walks. He pitched in one more game for the Senators in 1949 before returning to the minor leagues for the balance of his professional career.

Washington added four unearned runs in the ninth, highlighted by Robinson’s 17th home run of the season, to make the final score 20-5. It was the second time in 1949 that the Yankees scored 20 runs in a game; they beat the St. Louis Browns 20-2 in the first game of a doubleheader on August 7.

Reynolds, supported by 20 runs, 17 hits, and 17 walks, improved to 16-4. Calvert took the loss for the Senators, his 12th consecutive defeat. It dropped his record to 6-15. He finished the season with a 6-17 record, leading American League pitchers in losses.

The Yankees completed the doubleheader sweep, winning the nightcap 2-1. The game was called after 5½ innings due to darkness. The good news for Washington? Senators starter (and loser) Sid Hudson issued only two bases on balls.

The first game of the doubleheader lasted 3 hours, 2 minutes. Even with all of the walks and the 50-minute inning, it was still five minutes shorter than the average game in 2020.

Thanks to John Fredland for reviewing and editing earlier drafts of this article. The author also thanks Kevin Larkin for fact-checking and Leonard Levin for copy-editing.

In addition to the Sources cited in the Notes, the author consulted the Baseball-Reference.com and Retrosheet.org websites for pertinent material and the box scores noted below and game coverage in the New York Times and the New York Daily News.