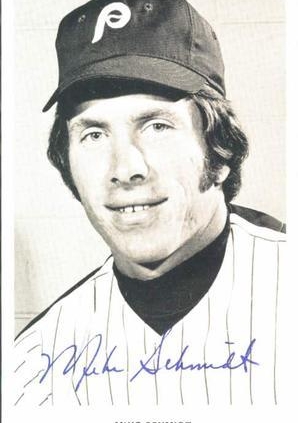 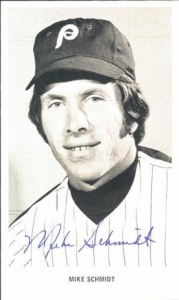 The Philadelphia Phillies selected future Hall of Famer Mike Schmidt out of the University of Ohio in the second round of June 1971’s amateur draft. After half a season at the Phillies’ Double-A affiliate in Reading, Pennsylvania, Schmidt spent 1972 with the Eugene (Oregon) Emeralds in the Triple-A Pacific Coast League, where he hit .291 with 26 home runs and earned a September call-up to the Phillies.

Schmidt’s second start, on September 16 against the Montreal Expos, was more memorable.

At this late point in the season, the Phillies and the Expos were playing out the string on a long season. The Expos were 64-75, in fifth place in the National League East, 25½ games behind the division-leading Pittsburgh Pirates. The Phillies at 50-89 had the worst record in the major leagues. A small crowd of 6,471 was at two-year-old Veterans Stadium, but that group did include Schmidt’s parents, Lois and Jack, who traveled from their Dayton, Ohio, home to see their son play.

The pitching matchup featured two rookies who were former first-round draft picks. The Phillies’ Wayne Twitchell was up briefly with the team in 1971 but maintained his rookie status in 1972 when he served the Phillies as a reliever and spot starter. The 24-year-old right-hander had compiled a 3-8 record and 4.45 ERA. The Expos’ Balor Moore, a left-hander, took over a spot in the starting rotation when he was recalled from the Double-A Quebec Carnavals in June. Moore had an 8-7 record. The 21-year-old was on an 18-inning scoreless streak, during which he had shut out both the Mets and the St. Louis Cardinals.

The Phillies lineup featured so many September call-ups that Montreal manager Gene Mauch, who had managed the Phillies from 1960 through 1968, spoke to his veteran catcher Tim McCarver on the field before the game. McCarver had been a member of the Phillies until a June 14 trade brought him to Montreal. “We’re going to have to talk things over when we get back [to the clubhouse],” Mauch said. “I don’t know anything about [shortstop] Craig Robinson or [catcher] Bob Boone or Mike Schmidt.”2 McCarver said, “I don’t know anything about Schmidt either.”3 They both soon became well-acquainted with him.

Twitchell retired the Expos in order in the first. With one out in the home first, Terry Harmon tripled to center field. The scoring threat died, however, when Expos right fielder Ken Singleton gunned down Harmon as he attempted to score on Greg Luzinski’s4 fly ball.

Schmidt’s first at-bat, in the second inning, resulted in a fly out to right. The game remained scoreless going into the fourth inning, when the Expos eked out a run. After Tim Foli struck out, Singleton walked and moved to third when Ron Fairly singled to center. McCarver hit a slow roller to shortstop for a force out, while Singleton scampered across home plate. Expos 1, Phillies 0.

The game remained 1-0 as the pitchers dominated the middle innings. Twitchell allowed only Boots Day’s leadoff double in the sixth. He retired Foli, Singleton, and Fairly on groundballs to strand Day. Moore, meanwhile, retired 12 straight Phillies from the third through the sixth and extended his scoreless streak to 24 innings. One of those outs came in Schmidt’s second at-bat, a groundout to second baseman Hector Torres in the fifth.

In the bottom of the seventh, Harmon led off with a single to left field and moved up to third on Luzinski’s soft single in the same direction. With Joe Lis at the plate, Luzinski took off for second, hoping to avoid a double play. Lis smashed a line drive in the shortstop hole, which Foli snatched with a dive to his right. Foli rose from the dirt to easily double up Luzinski at first.

With two outs and Harmon still at third, Phillies right fielder Roger Freed strode to the plate. Schmidt came out to the on-deck circle. Freed was in his second disappointing year with the Phillies. Acquired in a trade with the Orioles in December 1970 after a terrific year at Triple-A Rochester, he hit just .221 with 6 home runs in 1971.

His 1972 season was not going much better, but Mauch decided to walk Freed intentionally to get to the less experienced Schmidt. Moore, of course, had handled Schmidt easily in his first two at-bats.

Thirty-six years later, Moore recalled what happened next. “[McCarver] comes to the mound and asks what I know about Schmidt. We decide not to get beat on anything but my fastball. After two pitches we have the count in our favor, 0-and-2 and call for a fastball low and away. Good call. Bad pitch. Normally my fastball will tail off the plate but, in this instance, it started low and away and ran back over the heart of the plate.”5

Schmidt smashed the pitch over the left-field wall, scoring Harmon and Freed in front of him, giving the Phillies a 3-1 lead, and ending Moore’s scoreless-inning streak with an exclamation point. It was the first of 548 career home runs for Schmidt.

In the eighth inning, Twitchell gave up a leadoff single to pinch-hitter Bob Bailey and, after two outs, another single to Singleton. Phillies manager Paul Owens brought in lefty Mac Scarce to face lefty-swinging Fairly. Mauch countered by sending up right-handed-hitting Hal Breeden. Scarce got Breeden looking at a called third strike.

Scarce finished off the ninth inning routinely for his third save of the season.

Talking about his big home run after the game, Schmidt told the Philadelphia Inquirer’s Bruce Keidan, “I consider myself a power hitter, in the sense that a power hitter is someone who doesn’t have to get all of the ball to hit it out. I didn’t get all of that one tonight. I got it down off the end of the bat. I really didn’t have any idea it was going out.”6

Reminded by Keidan that he had tied teammate Lis for second place among Pacific Coast League hitters in 1972 with 26 home runs, Schmidt said, “I also led the league in strikeouts with a hundred and forty-something.”7

The always reflective and often self-effacing Schmidt went on to an 18-year Phillies career that ended in his election to the Hall of Fame in 1992. It took some time for his career to take off, though. In his rookie season of 1973, Schmidt hit just .196 with 18 home runs. Beginning in 1974, however, Schmidt hit more than 30 home runs in 13 of the next 14 seasons, leading the league eight times,8 to establish himself as the premier power hitter of his era.9

He also spearheaded a renaissance for a franchise that had claimed only two pennants—and no World Series championships—since its debut in 1883. The small crowd at Veterans Stadium for Schmidt’s first major-league homer watched a team destined for the NL’s worst record at 59-97, but they also witnessed the early signs of a brighter future.

Along with Schmidt, fellow newcomers Bob Boone and Greg Luzinski became mainstays in Philadelphia, joining Larry Bowa, a ninth-inning defensive replacement against the Expos but already in his third season as the Phillies’ starting shortstop in 1972. Steve Carlton, acquired in a controversial trade for Rick Wise in February 1972, had won his 24th game of the season a night earlier.

By 1976 Philadelphia was NL East champion with 101 wins; two more division titles followed in the next two seasons. When the Phillies won their first-ever World Series in 1980, wrapping up the title at Veterans Stadium with more than 65,000 fans cheering them on, their lineup for the series clincher featured Schmidt, Boone, Luzinski, Bowa, and Carlton—a core group ever since the lean days of September 1972.10

In addition to the specific sources cited in the Notes, the author used the Baseball-Reference.com and Retrosheet.org websites for general game, player, team, and season data.

1 Don Money, who at 25 was just one year older than Schmidt, was traded to Milwaukee that December to make room for the budding superstar Schmidt. Money went on to have a very productive 11-year career with the Brewers.

4 Luzinski, another young player at just 22, was completing his first full season in the major leagues.

5 Seth Swirsky, Every Pitcher Tells a Story (New York: Times Books, 1999), 119. Moore’s memory in this retelling of Schmidt’s first home run is a bit faulty. The count was 1-and-2 when Schmidt connected. The Inquirer’s Keidan reported the pitch was a high fastball.

8 In 1984, Schmidt tied for the league lead with Atlanta’s Dale Murphy.

9 Schmidt had many memorable games in his 18-year Hall of Fame career, including a four-home-run game at Wrigley Field in Chicago in 1976 and his 500th-home-run game in Pittsburgh in 1987.

10 While Schmidt, Boone Luzinski, Bowa, and Carlton would become Phillies mainstays, Joe Lis, Schmidt’s slugging compatriot in the minor leagues, was traded to the Minnesota Twins in the offseason. He never established himself as a regular major-league player. Wayne Twitchell had his best season in 1973, when he compiled a 13-9 record and was named to the National League All-Star team. A knee injury at the end of that season, however, limited Twitchell’s effectiveness in subsequent years. He retired in 1979 with a lifetime record of 48-65 with five teams.