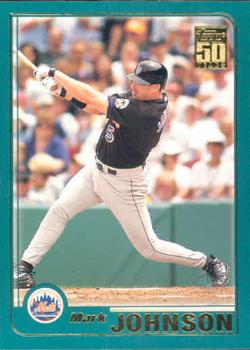 On the morning of September 11, 2001, the early morning calm in western Pennsylvania was shattered when an airplane crashed into the countryside in Shanksville, about 80 miles from Pittsburgh. It was one of four airplanes diverted from their usual courses that morning. Two planes were crashed into the twin towers of the World Trade Center in New York. The fourth plane was crashed into the Pentagon, outside Washington.

The nation collectively mourned for the victims of the murder, and baseball ground to a halt.

On the evening of September 11, the New York Mets had been scheduled to play the Pirates at PNC Park in Pittsburgh. When baseball resumed on September 17, most of baseball played the games originally scheduled for that date, deferring the games missed during the hiatus to the end of the season. The Mets and Pirates were scheduled to play at New York’s Shea Stadium on September 17. Since the ballpark was being used as a staging area in the recovery efforts, the Mets-Pirates series was moved to Pittsburgh.

The Mets, after spending a part of Saturday with volunteers at the World Trade Center, departed for Pittsburgh on Sunday, September 16. Manager Bobby Valentine did not fly out with the team. He caught a flight on Monday morning. He was busy at Shea Stadium serving as operations manager, directing the unloading and delivering of supplies for the Ground Zero rescue effort. He didn’t leave the parking lot until 11:00 o’clock on Sunday night.

“One of the lesser-known aspects of the Declaration of Independence is the unalienable right to cross a golden bridge on a soft late summer night and pay your way into a ballpark and buy a beer and a hotdog — or a sushi for that matter — and take a seat with a great view of an old American city.” — George Vecsey, New York Times 3

“May we never be so overcome by evil that we become less than we are called to be.” — Bishop Donald Wuerl, September 17, 20014

From behind home plate at PNC Park in Pittsburgh, you have a marvelously perfect view of the Pittsburgh skyline. As Bishop Donald Wuerl delivered a pregame prayer with the ballplayers lined up on the baselines, they couldn’t help but make the comparison of the skyline to a New York skyline that had changed in the blink of an eye.

To show support of their city’s policemen and firemen, the Mets wore caps emblazoned with the initials NYPD and FDNY.

The Pirates honored tickets sold for the initially scheduled September 11 game when they reopened their gates on September 17. Although 25,902 tickets had been sold in advance for the game, there were virtually no ticket sales on the day of the game. Only 8,000 spectators showed up, and as they entered the ballpark, they passed by a newly erected sign. Coolers, backpacks, and large bags were no longer allowed per an edict from Major League Baseball.

Many in the crowd, feeling a sympathy with New York, were wearing the blue and orange of the Mets. Of course, they were not as rambunctious as the Mets’ fan base in Queens. Indeed, noise was remarkably absent at PNC Park.

During the solemn pregame ceremonies, US Air Force reservists Brenton Black and Cathleen Snow sang the National Anthem and “God Bless America.” And managers Lloyd McClendon of Pittsburgh and Valentine of New York hugged each other.

The mood of the players seemed to mirror the lack of enthusiasm by the spectators, and the game was played with a heightened sense of boredom and, at times, absentmindedness.

Todd Ritchie (11-12) was the starting pitcher for Pittsburgh. The Mets scored first in the third inning. Their rally, if you could call it that, included only two balls hit to fair territory, neither of which went particularly far. Rey Ordonez opened things up with an infield single. With Mets pitcher Al Leiter at the plate, manager Valentine put on a hit-and-run play. Leiter hit a groundball that was fielded by Pirates second baseman Warren Morris, who threw to first to retire Leiter, Ordonez advancing to second base.

Ritchie then had a stroke of wildness. A wild pitch moved Ordonez to third and Ritchie hit Matt Lawton with a 1-and-2 pitch. With Desi Relaford at the plate, Lawton stole second base and Ordonez stayed at third. Relaford struck out for the second out of the inning and Mike Piazza was due up. To nobody’s surprise, Piazza received an intentional walk. Ritchie then walked Tsuyoshi Shinjo on a 3-and-1 count to force in the game’s first run. Robin Ventura struck out to end the 34-pitch top of the third.

The Pirates wasted singles by Chad Hermansen and Jack Wilson in the fourth inning but did tie the game an inning later. Kevin Young walked and was balked to second. When Gary Matthews Jr. pulled a grounder to shortstop, Young strayed too far off second base and Ordonez threw to second baseman Relaford, who tagged Young out. It was the second baserunning blunder in as many innings by Pittsburgh. (In the fourth inning, Hermansen, who had led off the inning with a single, got caught in a rundown between third and home.)

Pittsburgh no longer had a man in scoring position. Morris revived the hopes of the Pirates fans with a long fly ball to left-center field that bounded into the stands for a ground-rule double. Pinch-hitter Craig Wilson, in for pitcher Ritchie, grounded to third base, scoring Matthews.

The bats, which had been largely quiet for the game’s first five innings, were totally dormant in the next three innings.

Josias Manzanillo came on to pitch for Pittsburgh in the sixth inning and pitched two hitless and scoreless innings.

As the innings wore on, fans and players began to show more intensity and emotion. When Leiter headed back toward the dugout after giving up the run in the fifth inning, he was heckled by a fan. On this night, it came as a bit of a shock, but the Mets pitcher was energized, more energized than he had been all night, when he went out for his next two innings on the mound.

Lefty Scott Sauerbeck came on in the eighth for Pittsburgh and retired two batters. Mike Fetters was brought in to face Piazza. When Fetters fanned Piazza to end the inning, the emotion was clear as he pumped his fist in the air.

Leiter came out of the game after allowing one run and four hits in seven innings. He had struck out three batters. He would not be involved in the decision as the game was tied when he left the field. John Franco, on his 41st birthday, entered the game in the eighth for New York and held the Pirates scoreless in his inning of work.

In the ninth, the Mets rallied and once again wildness by the Pittsburgh mound staff was as responsible as New York’s batting prowess. Fetters hit leadoff batter Shinjo with a 2-and-2 pitch. Shinjo stole second base but Fetters was able to retire the next two batters, but then walked Jay Payton. On a do-or-die play, Pittsburgh third baseman Aramis Ramirez was unable to corral a bounder by Ordonez. It bounced once before going off Ramirez’s glove and heading to left field. Shinjo scored and the Mets had the lead.

“I gave everything I could. I just wanted to do my part. I wanted to do something for New York tonight.” — Mark Johnson, September 17, 20015

Mark Johnson was sent up as a pinch-hitter for Franco, and his double off the right-field wall scored Payton and Ordonez.

Mets closer Armando Benitez dispatched the Bucs in order in the bottom of the ninth inning for his 39th save of the season. The win went to Franco, bringing his record for the season to 6-2. Fetters took the loss, his second against three wins.

With the win, their 18th in their past 23 games, the Mets drew to within a game of .500. They were in third place, seven games behind the East Division-leading Atlanta Braves. The Pirates sank further into the basement in the six-team Central Division.

For this game, the only security measure was the restriction on coolers, backpacks, and large bags. MLB refrained from mandating metal detectors. In coming years, metal detectors would become commonplace.

The Mets returned to Shea Stadium on September 21.

The rescue mission at the Worth Trade Center became a recovery mission and ultimately a new Freedom Tower would replace the hole in the Manhattan skyline.

In addition to Baseball-Reference.com and the sources shown in the Notes, the author used the following: