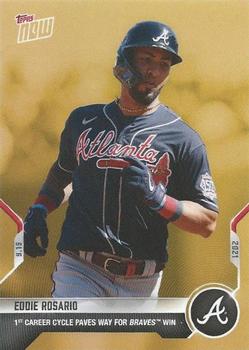 Entering the 2022 season, only one player had hit more than 14 triples in a season since 2012: Eddie Rosario. The left-handed-batting outfielder stroked 15 triples in 2015, leading all major leaguers. And he accomplished this feat as a rookie with the Minnesota Twins, playing in 122 games.

In his next six seasons, though, Rosario added only 10 more three-baggers to his career total.1 Yet he got one on September 19, 2021, and it enabled him to hit for the cycle in a game that reignited Atlanta’s drive toward the National League East title, eventually leading the Braves to the World Series championship.

Rosario spent his first six years in the majors with the Twins. On February 4, 2021, he signed with the Cleveland Indians as a free agent, but they traded him (with cash) to the Atlanta Braves in a July 30 deal for Pablo Sandoval. The Indians were 50-50, apparently fortifying their roster for a chance at the postseason (they were in second place in the AL Central, nine games behind the Chicago White Sox – and they had four teams beating them out for the second wild-card spot), while the Braves were 51-54 (in third place in the NL East, five games back of the New York Mets – with three teams edging them for the second wild-card spot). Rosario was batting .254 with 7 home runs (and one triple). He had played in 78 of Cleveland’s 100 games, primarily as a left fielder.

This trade, combined with others, shifted the momentum for Atlanta.2 Rosario became a regular in the Braves lineup on August 28, playing left field. In the 33 games after the trade, Rosario batted .271 and slugged .573 as the Braves clinched the division title for the fourth consecutive season. Cleveland, meanwhile, faltered down the stretch and was eliminated from contention after four postseason appearances in the previous five seasons.

Like the weather, the Braves were hot in August, winning 18 of 26 games, and they grabbed first place on August 15. They cooled significantly in early September, winning only six of 15 contests, but they still held the top spot in the standings on Sunday, September 19, as they prepared to play the final game of a three-game series against the San Francisco Giants. Atlanta had a four-game losing streak, including the last two games vs. the Giants, decreasing Atlanta’s lead over second-place Philadelphia to only a half-game.

The Giants were more than just hot; they were only three wins away from the century mark. A crowd of 32,210 packed into Oracle Park, hoping to see the Giants extend their winning ways (San Francisco had won 13 of its last 16 games, dating back to September 2). Anthony DeSclafani started for the home team, in search of his 13th victory of the season. Atlanta countered with Max Fried, who had not won a game since mid-August.

In the top of the second, batting with two outs, Rosario swung at an 0-and-1 pitch from DeSclafani and drove a liner through the defensive shift and into the right-field corner for a double. He had upped his hitting streak to four games. Travis d’Arnaud grounded out, however, and the game remained scoreless.

Both pitchers seemed to be control through the early part of the game. Through the first four innings, DeSclafani faced only 13 batters; Fried faced 14. Each had allowed two hits, and each team had turned a double play.

After Adam Duvall struck out looking to start the top of the fifth inning, Rosario crushed the first pitch he saw to the gap in deep right-center (affectionately known in San Francisco as Triples Alley3). The ball landed in front of the 415-foot marker and bounced high off the right-field wall, allowing Rosario to slide in safely with a triple. Desclafani then dueled d’Arnaud in a nine-pitch at-bat, which ended in a grounder to third baseman Evan Longoria. He threw home to catcher Buster Posey for the tag on Rosario. The scoreless battle continued.

DeSclafani had allowed four hits through the game’s first six innings (Fried only three), but Austin Riley led off the top of the seventh with a double to right-center. Duvall then launched his 37th home run well beyond the center-field wall and over San Francisco’s bullpen to give Atlanta a 2-0 lead. Duvall told the press afterward, “Being able to drive those runs in was huge, because it was a stalemate. It was 0-0. It felt like neither team could get anything going, so that was huge.”4

Zack Littell was called from the bullpen to replace DeSclafani, who had allowed five extra-base hits. Littell’s first pitch to Rosario also left the ballpark, bouncing into and out of the right-field stands and then splashing into McCovey Cove for Rosario’s 12th round-tripper of the season. That was all the scoring in the game.

Fried retired the Giants in order in the bottom of the seventh inning. Jose Alvarez relieved Littell in the top of the eighth, but after he yielded one-out singles to Ozzie Albies and Freddie Freeman, San Francisco skipper Gabe Kapler made another pitching change, calling for Camilo Doval to enter the game. Doval did his job, getting two straight outs and giving the Braves two LOB.

Rosario led off the ninth inning knowing he needed a single to make history. Kervin Castro was now on the mound for the Giants. He threw an off-speed pitch over the lower part of the plate and Rosario looped it over second base for a single. Rosario had hit for the cycle and, amazingly, he had completed the rare feat on four consecutive pitches (he faced only five pitches in his four at-bats).

Rosario requested the ball as soon as he touched first base, to put it on display “proudly in his house near the ball from his first career home run.”5 After the game, Rosario said, “I was so happy. I had the opportunity today and I did it.” According to the Atlanta Journal-Constitution, Rosario hit for the cycle while playing in the Gulf Coast League in 2010, five seasons before his major-league debut.6

Will Smith closed the game for Atlanta, striking out two of the three batters he faced. Atlanta had won, 3-0. Except for one half-inning, this game was a classic pitchers’ duel.

Fried pitched seven scoreless innings in earning his 12th win. His effort and the home runs by Duvall and Rosario were the keys to Atlanta’s victory. The Braves avoided a series sweep by the Giants and expanded their first-place lead in the National League East to 1½ games over the Philadelphia Phillies, with 13 games left to play in the regular season.7

This victory jump-started the team, as the Braves won 12 of their final 14 games, and they ran away with the NL East title. With their lineup peaking at the right time, the Braves defeated Milwaukee in the Division Series, three games to one, then won the League Championship Series against the Dodgers in six games, before winning the World Series over Houston, also in six games. Atlanta won seven of the eight postseason games played at home.

Rosario’s performance marked the ninth time that a Braves franchise batter had hit for the cycle.8 His manager, Brian Snitker, told reporters, “That’s a big deal for a hitter to hit for the cycle. Great accomplishment and congratulations to him.”9 Further, in the 19 games Rosario had played to this point with Atlanta, his batting average was .320 and he was slugging .740 with 5 home runs. Even more amazingly, in his 12 starts for the Braves, Rosario was batting .341 with a 1.254 OPS, 5 homers, and 11 runs batted in.10

Rosario became the fourth batter to hit for the cycle in 2021, joining the Nationals’ Trea Turner (June 30 against the Rays), the Padres’ Jake Cronenworth (July 16 against the Nationals), and teammate Freddie Freeman (August 18 against the Marlins).

One more note about Rosario’s accomplishment: Many sources reported that this was the fewest number of pitches seen by a player who hit for the cycle since at least 1990.11

Since Curry Foley in 1882 became the first ballplayer in the majors to hit for the cycle, a major leaguer has hit for the cycle 334 times. Of those, I know the sequence of hits for 304 of them. (Play-by-play is often not available for nineteenth-century games, and newspaper accounts don’t provide all of the details.) Of the 304 games, the batter has completed the cycle with a single (hitting the single last) in 63 games (20.72 percent). Rosario’s sequence (double-triple-homer-single) has occurred just seven times (2.30 percent), and in the 24 possible permutations for a cycle, this is also the rarest.12 The author thanks SABR member Bruce Slutsky for his assistance with this article.

A video recap of Rosario’s four at-bats can be seen on mlb.com:

1 As of the end of the 2021 regular season. After his rookie season, Rosario’s batting average increased and his home-run output also increased, but his stolen bases (and total attempts) decreased. Perhaps he was sacrificing speed for power.

2 Other key acquisitions by the Braves were Jorge Soler from Kansas City (for Kasey Kalich) and Adam Duvall from Miami (for Alex Jackson).

3 The phrase was used in the television play-by-play description of the game (see https://www.mlb.com/braves/video/rosario-hits-for-the-cycle?t=braves-carry-the-freight).

10 See https://www.mlb.com/braves/video/rosario-hits-for-the-cycle?t=braves-carry-the-freight. Accessed October 2021. These stats are through the first three at-bats of the September 19 game, just before Rosario hit his single.

11 See Jake Gordon, “Braves: Eddie Rosario Breaks a Record While Hitting for the Cycle,” September 20, 2021, found online at https://www.sportstalkatl.com/braves-eddie-rosario-breaks-a-record-while-hitting-for-the-cycle/. Accessed October 2021. In this article, Jeremy Frank (@MLBRandomStats) states that Rosario’s total of five pitches were the lowest since 1990. Neifi Perez saw eight pitches in his cycle performance on July 25, 1998. It is not possible to check all batters back to 1900, as the data is not available. Baseball-Reference has pitch-count data back to 1990.

12 As of the end of the 2021 regular season. In case you are wondering, the permutation of getting the triple last has the highest probability, 29.93 percent.