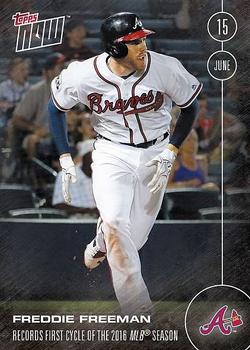 There had not been too many bright spots for either the Atlanta Braves or the Cincinnati Reds in the first few months of the 2016 season. Atlanta opened by losing nine straight ballgames, quickly took possession of the bottom spot in the National League’s East Division, and never left. With an 18-44 record, they hosted the Cincinnati Reds in a four-game series that began on June 13. Cincinnati had won only 17 games during April and May, and at 24-39 was in last place in the NL Central Division entering the series against the Braves.

The Reds won the first two games of the series, but on June 15 Atlanta’s luck changed. In a 13-inning game that lasted 5 hours and 18 minutes, the Braves won in a walk-off, and Freddie Freeman hit for the cycle, accomplishing the rare feat in rare fashion.

A pair of right-handers faced off against each other. For Cincinnati, Anthony DeSclafani was making just his second start of the season. Five days earlier, he had pitched six innings against the Oakland Athletics, allowing eight hits but just one run. Journeyman Bud Norris had the mound duties for the Braves. He had signed with Atlanta as an offseason free agent and was making his 20th appearance of the season (eighth start).1

Norris labored in the top of the first, and although he kept the Reds hitless (walking Joey Votto), he did throw 25 pitches. His teammates gave him some offensive support in the bottom of the inning. Mallex Smith led off with an infield single. Ender Inciarte lined the ball into left-center for an RBI double. Freeman struck out as Inciarte stole third base. Adonis Garcia then grounded to shortstop Jose Peraza, who threw home to get Inciarte on the fielder’s choice. On the very next play, Nick Markakis singled to left field. Jace Peterson was then retired, and the Braves settled for only one run in the inning.

DeSclafani worked around a walk in the second inning but struggled in the third. With one out, Freeman sent a liner down the right-field line for a stand-up double. Garcia’s single advanced Freeman to third base. Markakis walked, loading the bases.

Peterson grounded a ball to first baseman Votto, who made an errant throw home trying to get the force of Freeman. The Braves had a 2-0 lead, and the bases remained loaded. Tyler Flowers struck out, but then Erick Aybar’s double into the left-center gap brought home Garcia and Markakis with two more unearned runs.

When DeSclafani walked Norris, loading the bases for the third time in the inning, Reds manager Bryan Price wasted no time in making a call to the bullpen. A.J. Morris entered as the first of seven relief pitchers for the visitors. DeSclafani became the third Reds starter in their last four games to pitch four or fewer innings. And, according to the Cincinnati Enquirer, “Making matters worse, the Reds hadn’t even had a hit when DeSclafani left the game.”2 Morris struck out Smith on three pitches, but Atlanta had a 4-0 lead.

Norris had faced only 10 batters in the first three frames, but he lost his control in the fourth. Votto walked and moved to second on Brandon Phillips’ single to center. Jay Bruce doubled Votto home. Phillips scored on a sacrifice fly by Adam Duvall (Bruce went to third on the play), and a groundout by Iván De Jesús brought Bruce home. The Reds’ deficit had been trimmed to one run.

Freeman tripled in the bottom of the fourth but was stranded there. Morris walked Peterson to start the bottom of the fifth inning, and Price called for Josh Smith to enter in relief. Peterson stole second and scored on Aybar’s single up the middle.

In the sixth, Cincinnati’s Phillips singled and advanced to second on third baseman Garcia’s throwing error. Bruce singled Phillips home. Duvall then lifted a fly ball to right-center that “hit the yellow line atop the wall by the 390-foot sign”3 but bounced back to the field for a double. Bruce had held up, expecting a catch, so he only made it to third base. De Jesus’s single brought home both baserunners, giving the Reds a 6-5 lead.

Freeman, however, tied the game in the home half of the inning with his 11th home run of the season, an opposite-field shot that cleared the left-field wall.4

Over the next three innings, each side brought in new pitchers, but neither team could score the go-ahead run. Cincinnati’s J.C. Ramirez struck out the side in the bottom of the ninth, sending the game to extra innings. In the 10th, each team managed a single to go with three strikeouts (all swinging). The Reds had two baserunners in the 11th, but three more swinging strikeouts ended any threat.

In the bottom of the 11th, Freeman stroked a Tony Cingrani slider for a two-hop single into right-center field, completing the cycle.5 He advanced to second on a balk and gained third base on Garcia’s infield single. With Markakis batting, Garcia ran to second. (The play was scored as defensive indifference.) Markakis fouled off a few balls and then drew a walk, loading the bases. As the left-handed-batting Peterson stepped into the batter’s box, right fielder Bruce and center fielder Tyler Holt switched positions. Peterson hit a dribbler in front of home plate that catcher Tucker Barnhardt grabbed, stepping on the plate for a force out. Holt and Bruce switched positions in the outfield again, and Cingrani retired the next two batters.

Another scoreless inning passed, but in the 13th, the remaining fans at Turner Field got their money’s worth. Braves reliever Alex Ogando walked leadoff batter Duvall. De Jesus, in an attempt to sacrifice Duvall to second, bunted the ball in the air toward second. Peterson couldn’t make the catch and was charged with an error; everyone was safe.

Holt laid down a successful sacrifice, putting runners at second and third. Ogando struck out Eugenio Saurez but then intentionally walked Barnhardt, giving the Braves a potential out at any base. Paraza worked a full count before drawing ball four, and his RBI walk gave Cincinnati the lead. Votto dropped a single into short left field. De Jesus scored, but Barnhardt was gunned down at the plate on a perfect throw by left fielder Chase d’Arnaud. Still, the Reds had grabbed a two-run lead.

Alfredo Simon had pitched a scoreless 12th inning for the Reds, but Garcia and Markakis started the bottom of the 13th with back-to-back singles. Peterson’s double sent Garcia home. Flowers sent a grounder through the hole between third and short, and Markakis scored the tying run. With Aybar due up, the Reds pulled the switcheroo again, with Bruce and Holt trading positions. Aybar was intentionally walked, loading the bases, and the two outfielders resumed their previous positions once more. The infield drew in for a force play at the plate and all the outfielders came in for a possible play at the plate. With a 1-and-1 count, d’Arnaud sent a fly ball to deep center for a walk-off single. Peterson scored the winning run and the Braves had triumphed, 9-8.

Seventeen pitchers were used by the two teams. Bruce and Holt played musical chairs in the Reds outfield, switching between center and right field five times. The teams combined for 17 runs and 30 hits.

This was the first time in 2016 that a batter had hit for the cycle.6 After the game, Freeman told reporters, “It probably would have meant nothing if we didn’t win, but the comeback kids came out tonight. Big rally in the 13th. Nice to finally get a win.”7 The 26-year-old Freeman stayed hot. The day after his historic cycle game, he was 3-for-4 with a home run. He went 10-for-18 in the four-game span, improving his batting average by 23 points while collecting six extra-base hits.8

The last Atlanta Braves player (before Freeman) to hit for the cycle was Mark Kotsay, who did so against the Chicago Cubs on August 14, 2008. Before Kotsay, Albert Hall accomplished the rare event on September 23, 1987, against the Houston Astros. Four other players in franchise history have hit for the cycle, but all of them occurred before 1910, leaving a span of 77 seasons without a batter accomplishing this feat.9

There are 24 different permutations for a batter hitting for the cycle, depending on the specific order of the four different hits. The double-triple-home run-single permutation has become the rarest in major-league history, having occurred only five times through the end of the 2020 baseball season.10 The last player to get the four different hits in this order was Pittsburgh’s Daryle Ward, who hit for the cycle on May 26, 2004, against the St. Louis Cardinals.

Video highlights of Freeman’s cycle can be viewed at https://www.youtube.com/watch?v=wnl-rSZz7aI.

1 Norris had been a starter for almost all of his career until the 2015 season, when he started 11 of 18 appearances for the Baltimore Orioles before being released and subsequently signed by the San Diego Padres in August. He then made 20 appearances, all out of the bullpen. He was traded by the Braves to the Los Angeles Dodgers a few weeks after this game.

5 Freeman accomplished his cycle with the single in the 11th inning, meaning that he is one of a few batters to need extra innings to complete the rare event. Others include the Cardinals rookie Cliff Heathcote, who hit for the cycle in a 19-inning game against the Phillies on June 13, 1918, and two of his four hits (a double and a single) came after the regulation nine innings had been completed. Detroit’s Hoot Evers hit for the cycle on September 7, 1950, by banging out a single in the 10th inning of the game, which ended in a 13-13 tie with the Cleveland Indians. St. Louis Cardinals slugger Ken Boyer became the first major leaguer to complete the cycle with a walk-off home run when he did so on September 14, 1961, against the Chicago Cubs, to lead off the bottom of the 11th inning. The Dodgers’ Wes Parker tripled in the 10th inning on May 7, 1970, against the New York Mets, to complete his cycle. On June 28, 1984, Boston’s Dwight Evans homered in the bottom of the 11th inning against the Seattle Mariners for his accomplishment. Noting the lack of play-by-play information for many games (see Note 10), compiling a full list of extra-inning cycles is not an easy task.

6 Two more players hit for the cycle in 2016: Cleveland’s Rajai Davis (a reverse natural cycle on July 2, against Toronto) and Pittsburgh’s John Jaso (September 28, against the Chicago Cubs).

8 Freeman continued to hit as the season progressed, raising his average to .302, hitting a career-high 34 home runs and driving in 91 runs. Of his 178 hits (also a career high to this point), 83 went for extra bases.

10 Of the 330 known major-league cycles (through the end of the 2020 season), the sequence of the four hits is available for only 298. Many newspaper box scores in the nineteenth century list the specific hits but not the order in which they occurred (unless it is stated in the brief play-by-play accounts of the games). So, the double-triple-home run-single cycle is known to have occurred five times, giving a rare 1.68 percent frequency rate. In addition to Ward, the other batters who hit for the cycle with the double-triple-home run-single permutation are the New York Mets’ Keith Hernandez (July 4, 1985, against the Atlanta Braves), the Mets’ Mike Phillips (June 25, 1976, against the Chicago Cubs) and the Washington Senators’ Joe Cronin (September 2, 1929, against the Boston Red Sox).