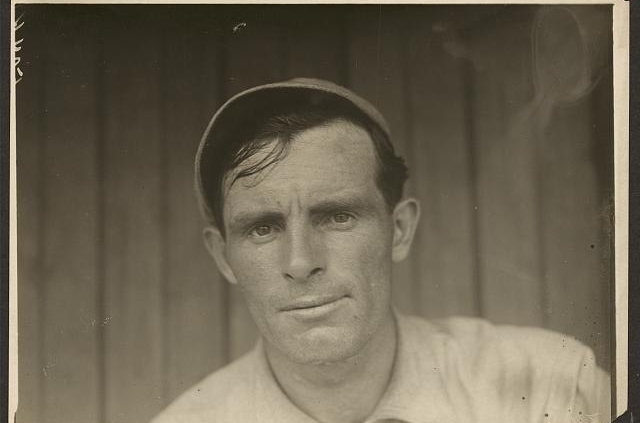 In 1910 attendance at the South End Grounds, home of the Boston Doves, was the lowest in the National League. By all accounts, only 985 fans showed up to see “the first game of the last series of 1910 on the local grounds,”1 a contest between Boston and the Philadelphia Phillies. The spectators witnessed the “swatfest of swatfests,”2 as the Boston batters “pounded the Quaker pitchers for 20 runs, the biggest total that has been made by the Doves this year.”3 The outburst was led by rookie Bill Collins, who hit for the cycle.

Since 1907, Collins had been playing in the minor leagues, in the New York Giants organization. On April 4, 1910, he was traded with infielder Buck Herzog to the Doves for outfielder Beals Becker. A switch-hitter, Collins started the season batting second for the Doves and playing right field. After three weeks, he was moved up to the leadoff position, and defensively, he took over as the starting left fielder at about the same time. That’s where he played for the rest of the season.

After recently losing four straight games to the New York Giants, which gave Boston 99 losses for the season, first-year manager Fred Lake’s Doves entered the three-game set against the Phillies with some anxiety about losing 100 games for a second consecutive season.4 Boston was concluding a 21-game homestand with this series. However, it is not fair to say they enjoyed the home play. Boston had won just five of the first 18 games. In the New York series, the Giants had outscored the Doves 50-24.

Lake named rookie Jiggs Parson as his starter. Parsons was making his ninth appearance (and third start) of the season, and the 24-year-old righthander was still searching for his first career win.5 Parson’s opponent on the mound was Philadelphia’s Bob Ewing, a veteran who had spent eight years with the Reds until he was traded to the Phillies before the 1910 season. This was Ewing’s fifth start against the Doves in 1910, and he brought a 3-0 record against Boston with him to the mound. Each of those victories had also been a complete game.

Philly’s John Titus “opened the jubilee by driving over the right field fence for a home run.”6 After Parson retired both Otto Knabe and Johnny Bates, Sherry Magee “smote to left-centre for two bases.”7 Eddie Grant drove a ball to the same area and wound up at third; however, shortstop Bill Sweeney’s throw to third went wide and Grant scored. Philadelphia had jumped to a quick, three-run lead.

The Doves manufactured a run in the bottom of the first. Collins singled and stole second. He advanced on a groundout by Wilbur Good and scored on another groundout by Dave Shean.

Southpaw Al Mattern replaced Parson to start the second inning. Mattern led the National League in appearances in 1910, with 51. He had won 15 of Boston’s 50 victories to this point in the season. He quickly gained control and blanked the Phillies in each of the next three innings.

Meanwhile, the Doves were just getting started. In the bottom of the second, Boston “touched up Ewing for keeps.”8 Doc Miller walked and scored on Sweeney’s double. Joe Burg reached on an infield single and Bill Rariden cleared the bases with a homer over the left-field fence, his first home run of the season (and of his career). Mattern singled, and after Collins was retired, Good smacked an RBI triple to deep center and then scored on Fred Beck’s “Texas Leaguer”9 to left. Boston had grabbed the lead for good, 7-3.

The Doves “kept up the tattoo in the third.”10 Rariden, Mattern and Collins all reached (Collins hit a double that plated Rariden), and rookie Charlie Girard was called from the Phillies bullpen, replacing Ewing. Gerard had been selected from York (in the Tri-State League) in the major-league draft on September 1 and was making just the sixth appearance of his career.11 Good drew a walk, and back-to-back doubles by Beck and Miller highlighted the five-run frame, but, according to the Boston Globe, “the game was too one-sided to be interesting.”12

The Phillies rallied in the fifth, adding three more runs. Errors by Collins and Burg, coupled with singles by Girard and Titus and a double by Knabe, contributed to the scoring. In the seventh, Philadelphia add a solo run when Titus singled, advanced to third on Knabe’s second double of the game, and scored on a groundout by Bates. The score was now 12-7.

The Doves “took it easy for three innings, but got busy again in the seventh,”13 when they put the game out of reach. Two walks, a hit batsman, a triple by Collins, and singles by Good and Sweeney translated into five more runs for the home team. Boston continued the hitting spree in the eighth. After Rariden walked, Mattern doubled. Both baserunners scored when Collins hit the ball over left fielder Magee’s head for an inside-the-park three-run home run. Barney Slaughter, Philadelphia’s third hurler of the day, came on to retire the side.

The Fall River Globe reported, “All of the fences were dented with crashing bangs, and several bats were broken against the swift firing Collins of Boston, with the record of a single, a two-bagger, a triple and a home run within the grounds.”14 Interestingly, according to the Boston Globe, Collins had only nine total bases (a home run, a triple, and therefore two singles). His name (as well as four other players) is not listed in the Globe’s box score under “Two-base hits.”15 Yet Collins did indeed get a double and thus had hit for the cycle. In fact, he became the fourth player in history to hit for the “natural cycle,” when the order of the hits is in increasing total-base order.

Collins’s home run in the eighth inning was just his third of the season, and the final home run of his career. In 584 at-bats in 1910, Collins had 16 extra-base hits; he collected three of them in this game.

Collins’s feat of hitting for the cycle was the third such accomplishment of 1910, joining Pittsburgh’s Chief Wilson (July 3 against the Reds) and Philadelphia A’s slugger Danny Murphy (August 25 against the Browns). However, Collins was the first batter to get the quartet of hits in order.

Bill Collins played in 151 games in 1910. However, in 1911, he played in just 17 games for Boston, starting in only nine of them. He was no longer the leadoff hitter. On June 10, 1911, Collins was traded by Boston (now called the Rustlers) with Cliff Curtis, Wilbur Good, and Peaches Graham to the Chicago Cubs for Johnny Kling, Al Kaiser, Orlie Weaver, and Hank Griffin. Collins played just seven games for Chicago, and none after July 15. The Cubs sent him to the minor leagues, where he finished the season with the Class A Newark Indians (of the Eastern League). In 1912 the Indians became a Double-A team, part of the International League, and Collins appeared in 148 games for them, under player-manager Joe McGinnity. Collins spent parts of the next two seasons, traveling between Newark and the National League Brooklyn Dodgers (in 1913) and the Federal League Buffalo Buffeds (1914). Collins attempted a comeback in 1916/1917, playing a total of 190 games for the Class D Cedar Rapids Rabbits of the Central Association, but he never made it back to the majors. His rookie season of 1910 made up most of his big-league career.

4 Canadian-born Fred Lake had managed the Boston Red Sox in 1908 and 1909, leading them to fifth- and third-place finishes, respectively. According to Don Hyslop’s SABR biography of Lake (sabr.org/bioproj/person/fred-lake/), the Red Sox skipper had asked for a raise after the 1909 campaign, but owner John Taylor claimed that “it was not Lake’s managing that had led to the team’s improvement and refused the manager’s request.” The Doves won eight more games in 1910 than they had the year before, but Lake resigned. However, even though the club had hired Fred Tenney as manager on December 15, 1910, the Doves would not release Lake, so he could not manage elsewhere. From 1905 through 1912, Boston’s NL team had lost at least 90 games per season, but in six of those eight years, they had surpassed 100 losses.

11 Girard appeared once more in 1910, on October 11. He faced three batters, striking out two in a three up-three down inning. He never pitched in the majors again.