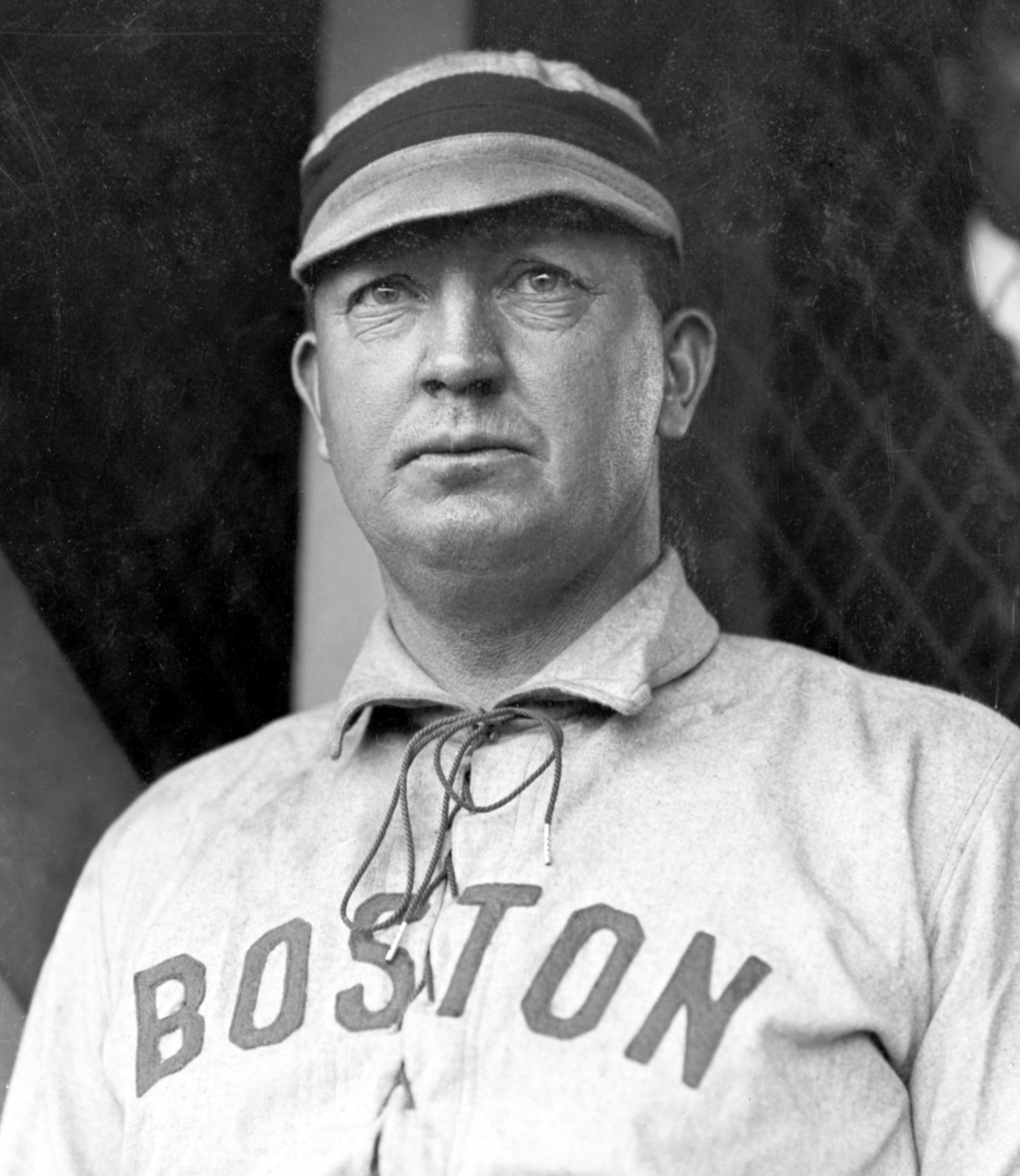 Cy Young won 511 games during his singular career, 94 more victories than any other major-league pitcher.1 His final win came September 22, 1911, when he pitched the visiting Boston Rustlers over the Pittsburgh Pirates, 1-0. Young was 44 years old, playing in his 22nd and final major-league season.

Young began 1911 with the American League’s Cleveland Naps, but on August 16, with just a 3-4 record, he was released.2 Three days later he signed with Boston,3 the National League’s last-place team. After seven starts for the Rustlers,4 Young was 3-2, including a five-hit, 6-0 shutout of Pittsburgh on August 30.

Boston was in Pittsburgh for a three-game series. It was the Rustlers’ second stop on a season-ending 24-game road trip. The third-place Pirates won the opener 3-2 — Boston’s 100th loss of the year — and won again the following afternoon, 4-3. The September 22 game was the final contest of the season between these teams. The rivalry had been one-sided, with Pittsburgh winning 19 of the first 21 encounters.

Though poorly attended, this game drew the biggest crowd of the series. Many in attendance came to see their beloved “Old Cy.”5 The famed pitcher had not suited up in Pittsburgh since the 1903 World Series, which was played at Exposition Park.6 This was his first — and only — appearance in Forbes Field. On this afternoon, he opposed Babe Adams, 20-game winner.

Young retired Pittsburgh on two grounders and a popup in the first inning, but three Pirates reached base in the second. Honus Wagner led off with a single, and after an out, Bill McKechnie slammed a single to center. Wagner, who had a lame ankle, rounded second, and set his sights on third, only to be thrown out by Boston outfielder Mike Donlin.

McKechnie alertly took second on Donlin’s throw, keeping pressure on Young. Alex McCarthy reached first, and McKechnie claimed third, when first baseman Jay Kirke fumbled McCarthy’s grounder near the base. Mike Simon grounded out, though, so despite two hits and Kirke’s error, Pittsburgh did not score.

Pittsburgh’s Max Carey singled with two outs in the third inning, but was caught stealing. The next two innings saw the Pirates collect baserunners, but not runs. Pittsburgh’s fourth began with an infield single, but after a fielder’s choice, and a popup, Wagner was on first with two outs. McKechnie doubled to left, but the hobbled Wagner stopped at third. The Pittsburgh Post-Gazette thought Wagner might have scored if not for his bad ankle. With two runners in scoring position, McCarthy “disappointed the spectators”7 by flying out.

Two things occurred in the Pittsburgh fifth that changed the course of the game. First, Boston catcher Bill Rariden made great defensive plays to prevent the Pirates from scoring. Second, the sparse home crowd — the attendance was 1,2088 — fully turned their allegiance from the Pirates to Young.

Simon started the Pirates’ fifth with a double, but Adams struck out. With Bobby Byrne batting, Young threw a wild pitch. Rariden stopped the ball with his glove hand, allowing Simon to advance just one base rather than two. The backstop at Forbes Field was 84 feet from home plate.9 “Had the ball gone the usual length of a wild pitch at Forbes Field, [Simon] would have scored with ease and comfort,” observed a Pittsburgh sportswriter.10

Rariden again preserved the shutout when Byrne bunted the ball in front of home plate as Simon came running down the line. The squeeze didn’t work because Rariden grabbed the ball and tagged a diving Simon before he could reach the plate. With Byrne now at first and two outs, Carey singled Byrne to third, and continued to second base on the outfielder’s throw. But with two runners in scoring position, Vin Campbell, the Pirates’ number-three hitter, “tapped out”11 from Rariden to Kirke, ending the inning. Young was cheered as he walked to the bench despite having just thwarted the hometown Pirates.

If there was any doubt whom the crowd was rooting for, it became clear in the top of the sixth. Young was the first Boston hitter, and he was again cheered. He flied out, and the Rustlers did not score, but Young, apparently buoyed by the adulation, began pitching better. The Pirates went down on three groundballs in the sixth, although shortstop Al Bridwell had to make “an amazing stop with one hand”12 to throw out speedy Owen “Chief” Wilson. Young also pitched a one-two-three seventh, and had now retired seven consecutive Pirates.

While Young was keeping Pittsburgh at bay, his teammates pushed across the winning run in the top of the seventh. Kirke led off with a double “about a foot fair”13 down the left-field line, and he went to third after Carey ran back to catch Doc Miller’s long fly to center. Bridwell then hit a short fly behind second, which fell just in front of the onrushing Carey. When the ball hit Carey’s glove on the short hop, it was knocked back into the infield. Kirke, who had edged toward the plate, saw the ball bounding away from Carey, and tore across the plate with the game’s only run.

Young encountered trouble in the eighth inning. Byrne singled, went to second on Kirke’s second error, and advanced to third when Campbell reached on a force play. Campbell stole second, putting two runners in scoring position. But Young struck out Wagner swinging, causing spectators to renew their cheers for Young. When Wilson grounded into the third out, keeping Pittsburgh off the scoreboard again, Young “was heartily cheered” on his way to the bench.14

Tommy Leach pinch-hit for Adams. A cautious Young, carefully deliberating between each pitch, fanned Leach to end the game and register a 1-0 win. As he straightened his uniform, and walked off the field, Young got an extra cheer from the departing fans. He politely doffed his cap, and told them, “You’ll see me next year — maybe.”16

Young allowed nine hits — but no walks — and struck out three. He “pitched classy ball.”17 Adams was better — except on the scoreboard — fanning six, walking no one, and limiting Boston to six hits. Kirke’s run put Adams on the wrong side of “a magnificent struggle between youth and age.”18

Without knowing Young had posted his final win, the Post-Gazette’s C. B. Power nevertheless gave a tribute worthy of such an occasion:

“I first saw Young pitch in 1890. He was then a slender youth, but on that occasion, he twirled very much after the style he showed yesterday. Truly Mr. Young gives promise of never growing older as a pitcher, and we are all glad of it, for during his long and brilliant career the big fellow has always been a credit to himself, his associates, his employers and his profession. Of course, it was very unkind of Cyrus to take two games from the Pirates — one in Boston and one on Forbes Field — without allowing them once to cross the plate, but in our admiration for him as a man and a pitcher we are forced to overlook the double sting.”19

Unfortunately for Young, he was indeed growing older as a pitcher. His decline was nearly complete. He threw three more games in 1911, but lost each time. He was on Boston’s roster the following spring, but a chronically sore arm prevented him from pitching.20

Play-by-play descriptions were taken from the following newspaper articles:

4 Known in the nineteenth century as the Beaneaters, the Boston team was called the Doves from 1907 to 1910, the Rustlers in 1911, and the Braves starting in 1912. sportsteamhistory.com/boston-doves.