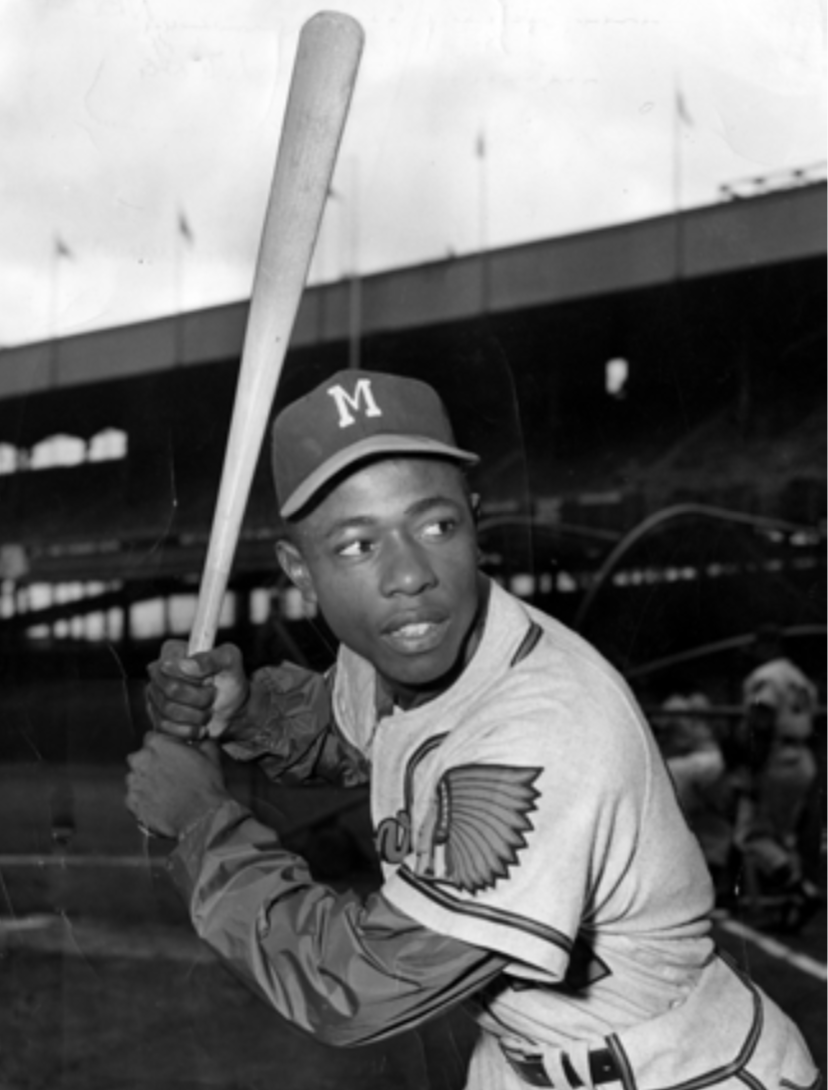 The woman took her seat in the fourth row of the grandstand in the crowded ballpark. She had purchased her ticket at the last moment and she was unrecognized as she sat among the patrons in a crowded Milwaukee County Stadium.  Later on that evening, Mrs. Henry Aaron would cover her face with her hands and sigh, “I’m so glad it’s over.”1

“No more had the radio announcer said ‘Home Run!’ than the din began, than there were hoots and long solid roars.  Here and there were heard squeals, shouts, laughter.”2 So wrote Harry Pease in the Milwaukee Journal after the Braves brought the National League pennant to Milwaukee, propelled by an 11th-inning homer by Hank Aaron.

It had been five years since the Braves had played their last game in Boston and received a warm welcome in Milwaukee. They finished above .500 in each of their first four seasons in Milwaukee and they never finished lower than third place. As August roared into September in 1957, the Braves were on a pace to set an all-time attendance record and win their first pennant in their new hometown.

A 10-game winning streak from August 4 through August 15 had propelled them to an eight-game lead over their nearest rival. Then, after seeing St. Louis close the gap to 2½ games on September 15, the Braves had reeled off another six straight. They were on the verge of a champagne-popping experience when they took the field at Milwaukee on September 23 to face the fading Cardinals. The magic number was two.

The fans poured through the turnstiles and their numbers reached 40,926. The count may have been higher had not the chilly weather deterred some folks from attending. Those who braved the 49-degree temperature as the game began would cheer the home team lustily. Braves manager Fred Haney gave the ball to Lew Burdette. Burdette’s record coming into the game was 16-9. The Cardinals’ dream of extending the 1957 campaign hinged largely on the left arm of Wilmer “Vinegar Bend” Mizell. Mizell had won at least 10 games in each of his first three seasons with the Cardinals, but 1957 was an offyear. He brought a record of 8-10 into the game, and his ERA stood at 3.70.  However, he had won his previous three decisions.

The game was scoreless as the Braves came to bat in the bottom of the second inning. Singles by Aaron and Joe Adcock put runners on first and second with none out. Andy Pafko was up in an obvious bunting situation. On the first pitch, Pafko did not show bunt and took the pitch. On the next pitch, he laid down a beautiful bunt that Mizell was unable to field cleanly. Pafko was credited with a single, and the bases were loaded.3 Wes Covington sent a fly ball to center field and Aaron retreated to third base to tag up. Then center fielder Wally Moon dropped the ball. Aaron scored easily and Covington reached safely. The bases remained full. Cards manager Fred Hutchinson brought in pitcher Larry Jackson, who stranded the three runners. The Braves took a 1-0 lead to the third inning.

Jackson and Burdette hurled goose eggs at each other over the next three innings.  In the top of the sixth, it was the Cardinals’ turn to mount a rally. A single by Moon, a double by Stan Musial, and an intentional pass to Irv Noren loaded the bases with one out. Lew Burdette was on the verge of escaping without damage after Del Ennis popped up for the second out of the inning. But Alvin Dark’s grounder up the middle eluded Burdette for a single that scored two runs.  The Cardinals had a 2-1 lead. Burdette avoided further damage, getting Hobie Landrith to ground out.

Jackson, usually a starter, was in his sixth inning of relief work when the Braves came to the plate in the seventh inning. Red Schoendienst, who had come to the Braves from the New York Giants earlier in the season, opened the inning with a single up the middle, just out of Jackson’s reach.  Johnny Logan’s bunt advanced Red to second base and he scored on a double off the bat of Eddie Mathews.  It was Mathews’ 28th double and 94th RBI of the season. There was no further scoring as Jackson, after issuing an intentional pass to Aaron, induced Adcock to hit into an inning-ending double play.

For the next two innings zeros filled the scoreboard, although the Cardinals threatened in the eighth. Moon walked to lead off the inning and advanced to third base on a single by Musial. Dick Schofield ran for Musial and the stage was set for Irv Noren.  His grounder to short took a bad hop, but Logan corralled the ball and his throw home nipped Moon as he tried to score. Burdette got the next two batters on grounders and the score remained knotted.

Through nine innings, Burdette allowed only two runs and scattered nine hits. Jackson gave way to Billy Muffett in the ninth inning and Muffett extended the game to extra innings, setting down the Braves in order in his first inning of relief.

Burdette, showing no signs of weakness, pitched a scoreless top of the 10th inning. In the bottom of the inning, the Braves mounted a threat. The bases were loaded with one out and Burdette, with his .151 batting average was due up. He had singled earlier but Haney elected to send up left-handed-hitting Frank Torre to face the right-handed Muffett. Torre grounded into a 3-2-3 double play and the game went on. The Cardinals were still alive.

Gene Conley entered the game for the Braves to pitch the 11th inning. Conley had originally signed with the Braves when they were in Boston was one of six members of the 1957 team who had played for both the Boston and Milwaukee Braves. Conley saw three batters in the top of the 11th inning and retired them all. Muffett took the mound for his third inning of relief. With one out, Logan singled to center field and he was still on first base after Mathews flied out to center field.  Up stepped Hammerin’ Hank.

Three hours and 33 minutes had elapsed since Lew Burdette had thrown the first pitch of the game. Aaron sent Muffett’s first delivery skyward toward deepest center field and Moon gave chase, leaping as high as he could, but to no avail. The ball came down into the hands of Hubert Davis, who was among a cluster of fans standing beyond the fence.4 Coincidentally, the temperature on the field was the same as the number on Aaron’s back — 44. Aaron’s 109th career homer was his 43rd of the season, and after he circled the bases the Braves were on their way to the World Series to face the Yankees.

Doyle Getter of the Milwaukee Journal looked on as “(h)ats and scorecards and streamers and torn-up paper were thrown into the air. The din was so loud you couldn’t hear the person standing next to you. Fans jumped up and down and screamed. The entire Braves’ dugout poured out onto the field and mobbed Aaron as he reached home plate.  He was swallowed in a swirling, pounding mass of delirious players and coaches.”5

Andy Pafko’s wife was keeping score and once the bedlam died down made her final notes of the evening.  “Won pennant, 4-2, Conley, winning pitcher.”6 The win brought Conley’s record for the season to 9-9.  Muffett’s record went to 3-2.

The Braves took their celebration to the Wisconsin Club and lingered until 5:00 A.M. The uproar in the streets, mostly spontaneous, continued until close to 4:00A.M.  Only seven arrests were made — three for drunkenness and four for disorderly conduct. The next day, District Judge Robert Hansen handed out suspended sentences to all who came before him, including the three arrested for drunkenness.  “Any Milwaukeean ought to be forgiven, because last night was a night to celebrate.”7