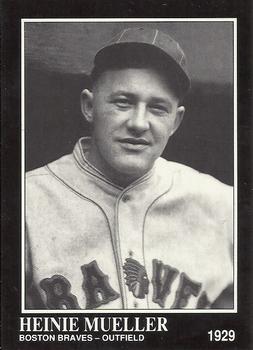 The Boston Braves played 15 doubleheaders in 25 days while wrapping up their 1928 schedule – all but two at home at Braves Field.

Their grueling stretch began on August 31 when they hosted the Philadelphia Phillies in a doubleheader, in part to make up their rained-out Fourth of July game. The Braves lost the first game but won the second that day. They entered September in seventh place with a record of 40-78. The Braves had some separation in the National League standings; they were 33 games behind the first-place St. Louis Cardinals and 17½ games behind sixth-place Brooklyn, but they held a reasonably comfortable six-game lead over last-place Philadelphia.

A day after concluding August with a doubleheader, the Braves and Phillies kicked off September with another; Boston had an 11th-inning walk-off win in the opener, then lost, 7-1. The Braves lost a game to the Giants in New York on September 2, then came back to Boston to see their September 3 Labor Day doubleheader rained out.

It was made up on September 4 as part of a doubleheader, and then the run began. Over the next 12 days, the Braves played nine doubleheaders – with the only breaks in their schedule coming on two rainouts and a scheduled Sunday day off.

There was still no Sunday baseball permitted in Boston, so September 16 was a day off – just as September 9 had been a day off because Pennsylvania prohibited games on Sunday. The Braves played single games against the Cubs on September 17-18 (losing 15-5 and 8-3), and then (after the September 19 game was rained out) kicked off another stretch of four consecutive doubleheaders:

Over the stretch of doubleheaders, only one of the games had been shortened by an inning, while four games had gone into extra innings.

The run totals, just as perhaps a point of interest, were: Opponents 149, Braves 106.

The last game in the stretch ended in a win for the Braves. They were hosting the Pittsburgh Pirates, who were defending National League champions in 1928. The Pirates were in fourth place; they still had an outside shot at third place, positioned 2½ games behind the Cubs.

The Braves lost the first game on September 24, 3-1 in 10 innings. Each team had scored once in the second inning, then neither scored again through the ninth, though the Braves had left the bases loaded in the bottom of the ninth. Art Delaney had worked in relief since the second inning; starter Ben Cantwell’s left thumb was broken by a line drive hit by Adam Comorosky. Pirates second baseman Sparky Adams tripled to left field, scoring on an errant throw to third base by Eddie Brown. The Pirates added another run when Lloyd Waner singled to right, and two batters later scored from first on Pie Traynor’s single to right. Joe Dawson pitched the final four innings for Pittsburgh, relieving Carmen Hill (who had been struck on the right elbow by a batted ball and also forced to depart). Dawson got George Sisler to ground out, walked manager-second baseman Rogers Hornsby, and got center fielder Heinie Mueller to hit into a 6-4-3 double play.

The Braves went into the second game, knowing there were only five games left on the schedule. They were separated enough from the sixth- and eighth-place teams that their position in the standings was fixed. Their record was 49-99. They could aim for avoiding their 100th loss of the season. Winning their 50th game could also be a goal.

Starting for the Braves was right-hander Bob Smith, a converted shortstop who became a successful pitcher. His 1928 record of 12-16 (4.35 ERA) coming into the game was distinctly better than the Braves’ winning percentage. He’d been 12-12 through September 5 but then lost his next four decisions, including both games of the September 14 doubleheader. With two outs in the first inning and two men on, he picked off Pie Traynor to get out of the inning scoreless.

Pirates manager Donie Bush started a right-hander, Homer Blankenship. He’d been 1-1 for the White Sox back in 1923, returning to the majors for the Pirates five years later in September 1928. He’d appeared in three games, working a total of 8⅔ innings, with an ERA of 5.19. This was his first career start. He got through the first inning easily but in the second gave up a run on “doubles in succession by Mueller and Les] Bell.”2

The Pirates got their first run in the top of the fourth when first baseman George Grantham singled home Paul Waner, who scored thanks to an error charged to Lance Richbourg. His throw struck Waner in the back and “the ball bounded far away.”3

In the bottom of the sixth, Sisler singled to open the inning. So did Hornsby, Sisler talking third base. Mueller grounded out, forcing Hornsby while Sisler ran home. A single and a fielder’s choice followed but no more runs scored. It was 2-1, Braves.

Neither team scored in the seventh. Both pitchers were throwing well. Smith had walked four but given up only five hits. Blankenship had given up seven hits but walked only one.

The game was “anybody’s fight right up to the eighth.”4

In the bottom of the eighth, Mueller struck a one-out single to right field. Bell hit his second double of the game, also to right field, Mueller scoring for a 3-1 lead. Shortstop Doc Farrell then singled to right, and Bell scored. It was 4-1, Braves, going into the ninth. Both Mueller and Bell had three-hit games, with Bell collecting two doubles.

With Pittsburgh down to its last three outs, shortstop Glenn Wright led off with a single off Smith. Comorosky made an out, and pinch-hitter Fred Brickell struck out. Blankenship was due up. Bush put in rookie Erv Brame to pinch-hit. It paid off when Brame doubled to right field. Wright scored.

It was 4-2 and the potential tying run came to the plate in Sparky Adams. But Smith retired him and the game was over. The Braves had won their 50th game, and the final game of the 15 doubleheaders they had played in 25 days.

The Braves had four games left to play in the season. They lost all four, finishing at 50-103.5

The Pirates beat the Braves in the first of those four, a 13-8 win on September 25. It was, oddly enough, the 32nd game the Braves played that September, but only the fourth time they had played just one game in the day.

In addition to the sources cited in the Notes, the author consulted Baseball-Reference.com and Retrosheet.org. Thanks to Bob Brady of the Boston Braves Historical Association for drawing attention to this string of doubleheaders in “Let’s Play Two – Again and Again,” Boston Braves Historical Association Newsletter, Vol. 27, issue 3 (2020). Thanks to Gregory Wolf for supplying game accounts from three Pittsburgh newspapers.

1 The games may have run only 2 hours and 53 minutes combined. The Boston Herald and Springfield (Massachusetts) Republican both had the second game timed at 1:28. The Boston Globe had it at 1:34.

3 “Braves Split with Pirates,” Boston Herald, September 25, 1928: 20. At the bat, Waner himself was 0-for-7 for the day. He was on base, having reached on a force play. The National League batting championship was in the balance between Rogers Hornsby of the Braves and Paul Waner of the Pirates. Before the day began, Waner was batting .380, still within striking distance of Hornsby’s .390. But Waner’s 0-for-7 and Hornsby’s 3-for-6 created great separation between them. Hornsby won the title, .387 to Waner’s .370.

5 Harold Kaese wrote, “But the most important of the 103 games they lost was to the Cardinals the next to last day of the season, for that victory clinched the pennant for St. Louis.” Harold Kaese, The Boston Braves 1871-1953 (Boston: Northeastern University Press, 2004), 206.