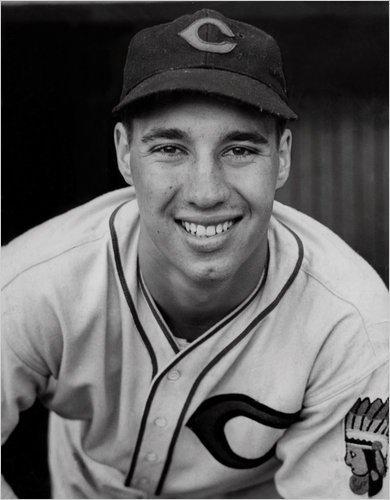 The Indians’ opponent that weekend was the St. Louis Browns, who were tied for sixth place with the Washington Senators with a record of 68-82. The Browns pulled ahead of the Senators into sole possession of sixth place with an 11-inning, 6-5 victory in the first game of the September 26 doubleheader with the Indians. The nightcap promised to be a tougher game as the Browns sent Denny Galehouse (9-9) against Bob Feller (24-13).

While the 1941 season had been a disappointment for the Indians as a team, it was not a disappointment for their 22-year-old star pitcher, Feller. Entering play on September 26, Feller led the American League in games pitched (43), games started (39), innings pitched (334), strikeouts (254), shutouts (6), and wins (24). His 27 complete games were second in the AL and his ERA (3.18) was fourth. The 1941 season would be the third in a row in which Feller led the AL in wins and innings pitched and the fourth consecutive season in which he led the league in strikeouts.

Galehouse kept pace with Feller through his first five innings of pitching. After 4½ innings, the game was scoreless. The two teams had combined for seven baserunners, with the only two hits of the game coming against Galehouse, a second-inning single by Oscar Grimes and a fifth-inning double by Gene Desautels.1

In the bottom of the fifth inning, the Browns’ Johnny Berardino led off with a walk, the fifth walk of the game allowed by Feller. Browns catcher Rick Ferrell attempted to sacrifice Berardino to second base. Ferrell’s bunt was so well placed down the third-base line that he was able to beat it out for the Browns’ first hit of the game.2

Feller’s early-game wildness continued, as he walked Galehouse and Johnny Lucadello, the latter walk forcing in the first run of the game. A second run scored on Harlond Clift’s flyout to Jeff Heath in left field.3

In the top of the sixth inning, the Indians got these two runs back on a double by Lou Boudreau, a triple by Hank Edwards, and a flyout by Heath.4

The game remained tied heading into the seventh inning. Galehouse retired the first two batters. But with two outs, Desautels singled and Feller doubled, putting runners on second and third. Boudreau singled to center, apparently scoring two runs. Feller was called out, however, on appeal, for missing third base, ending the inning. But the Indians had a 3-2 lead which would turn out to be the final score.5

Meanwhile, after walking Lucadello in the fifth inning, Bob Feller retired the final 15 batters he faced, leaving Ferrell’s bunt single as the only Browns hit in the game.6

This was the fifth one-hitter of Feller’s career. (He also had one no-hitter, which he had pitched on Opening Day in 1940 against the Chicago White Sox.) Ironically, this was the second game pitched by Feller in which the only hit he allowed was a bunt single by the St. Louis Browns’ catcher: Billy Sullivan had done the same thing on April 20, 1938.7

Worldwide events conspired to hasten Feller’s entry into the armed forces. Hearing about the Japanese attack on Pearl Harbor while driving from his home in Van Meter, Iowa, to Chicago, Feller immediately decided to enlist in the US Navy, and was inducted at a Navy recruiting office in Chicago two days later.9 This made Feller the second major-league player to enlist in the armed forces upon the United States’ entry into World War II, Hank Greenberg having enlisted the day before. 10.

Feller would return to the Cleveland Indians in 1945 and pitch for 12 more seasons. Over that time, he threw seven more one-hitters and two more no-hitters. His three no-hitters and 12 one-hitters were both major-league records at the time of his retirement. As of 2018 he still held the latter record, which was subsequently tied by Nolan Ryan in 1990.

In addition to the sources cited in the Notes, I used the Baseball-Reference.com and Retrosheet.org websites. For more information on Bob Feller’s careers, both in major-league baseball and in the US Navy, there is an excellent biography of Feller, written by C. Paul Rogers III for the SABR Biography Project.

For games for which Retrosheet does not have complete play-by-play data, volunteers do deduced play-by-play from contemporary newspaper accounts and other available information. I recently deduced this game as part of working through the 1941 season.