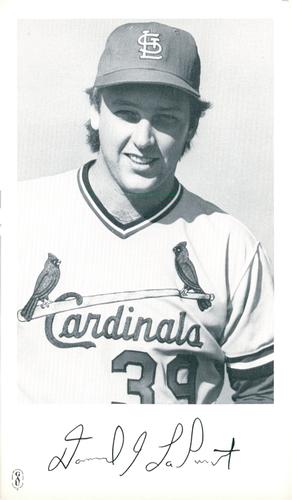 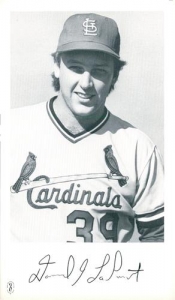 The St. Louis Cardinals returned to the postseason for the first time in 14 years when they clinched the 1982 National League East Division championship with a 4-2 win over the Montreal Expos on September 27.

“It feels like a dream,” said shortstop Ozzie Smith, acquired during the offseason from the San Diego Padres. “I’ve always wanted to experience what it was like to win a division title, and St. Louis gave me that opportunity. This is one leg of a long journey.”2

Rain delayed the start of the game at Olympic Stadium for an hour and three minutes, pushing the first pitch to 9:05 P.M. Eastern Time. Then Montreal starting pitcher Bill Gullickson got into trouble in the top of the first. With one out, Ken Oberkfell doubled to left field and, after Keith Hernandez flied out, scored on a single to left by Dane Iorg. Darrell Porter walked and Willie McGee slashed a ball to left-center that Andre Dawson attempted to corral with a backhanded shoestring catch. He didn’t make the play and the ball rolled to the wall, allowing Iorg, Porter, and the fleet-footed McGee to score for a 4-0 St. Louis lead. McGee slid under the tag of Expos catcher Gary Carter for his fourth home run of the season.

“Because the way Dawson plays center field, I thought he’d catch it,” said McGee, who had been recalled from the Cardinals’ Triple-A farm club in Springfield, Illinois, in May. “When it went by him, there was no looking back. I was just looking for the [third-base] coach.”3

The Cardinals’ sudden uprising proved to be more than enough offensive support for Dave LaPoint, who gave up six hits and walked four but allowed merely one run while striking out three to raise his record to 9-3 and drop his ERA to 3.35. Montreal scored its lone run against the left-hander with the noteworthy changeup in the second on a two-out single by Tim Raines that plated Chris Speier, who doubled leading off the inning.

“It was one of those games where you don’t realize how hard you’ve been working until you go sit down,” said LaPoint, who improved to 7-0 on the road for the season. “I saw that Philadelphia was losing, and I knew that I could be the one to win the [division]. After a while, I couldn’t see anything out there but Darrell’s [catcher Porter] glove.”4 Despite his youthfulness, LaPoint oozed confidence. “If I was the manager, I can’t think of another guy I’d rather have had out there tonight,” he said.5

LaPoint allowed at least one baserunner in each of the first four innings before pitching a perfect fifth, retiring Al Oliver on a groundout to shortstop, Carter on a foul pop to the catcher, and Tim Wallach on a fly out to left. In the sixth, Speier walked and Joel Youngblood singled to put runners at first and second with no outs. LaPoint got back-to-back fly outs by Doug Flynn and Wallace Johnson before Raines walked to load the bases. Doug Bair replaced LaPoint and coaxed a popout to shortstop by Dawson to end the threat. “That was a big thrill for me,” Bair said.6 Overall, the Expos were 1-for-9 with runners in scoring position and left 11 runners on base.

A two-out solo home run by Wallach off Bair made it 4-2 in the seventh. After Bair hit Ken Phelps with a one-out pitch an inning later, Cardinals manager Whitey Herzog called on his ace reliever, Bruce Sutter, to close out the clincher. Sutter retired all five Expos he faced, culminating with a high-bounding one-hopper by Carter to Oberkfell at third base. “I wanted it,” said Oberkfell, who grew up 15 miles east of St. Louis in Collinsville, Illinois. “Everyone probably wants the ball hit to him in that situation. I was only 12 years old the last time [the Cardinals] won, but I always dreamed of playing for them.”7 Oberkfell had three of the Cardinals’ six hits and also drew a walk in four plate appearances.

Sutter recorded his NL-leading 36th save, extending his own franchise season record. “It was the biggest game I ever pitched,” he said.8 Sutter subsequently won his third NL Fireman of the Year Award and was third in the NL Cy Young Award voting. In Rookie of the Year balloting, McGee and LaPoint placed third and eighth, respectively.9 “It was an appropriate clincher,” Keith Hernandez said. “Two rookies won it for us and Mr. Sutter saved it for us.”10

In the visiting clubhouse after the game, amid the celebratory beer and champagne showers, there was a heavy heaping of praise for Herzog, who in less than two years had transformed the Cardinals into champions. “He’s the best manager I’ve ever seen,” Hernandez said. “Why we won is attitude. It started last year. Whitey knew what he had to do. He’s a winner. He won at Kansas City [three AL West titles], and that’s no fluke. He knows how to get the most out of his athletes. The things he’s done the last few years a blind man could see.”11

For 17 of the 25 players on the Cardinals’ playoff-eligible roster, they were heading to the postseason for the first time. “We’re glad we clinched it … but we’ve been pointing toward the playoffs more than anything else,” Iorg said.12

The consistent Cardinals, who did not lose more than three games in a row until after they clinched the division, finished with a 92-70 record, three games ahead of the runner-up Phillies. Montreal wound up six games out. St. Louis went on to sweep the Atlanta Braves in three games in the NLCS and defeat the Milwaukee Brewers in an exciting seven-game World Series.

In addition to the sources cited in the Notes, the author used the Baseball-Reference.com and Retrosheet.org websites for player, team and season information, as well as the box scores for this game:

1 The 1968 Cardinals lost the World Series to the Detroit Tigers in seven games. Divisional play began in 1969.

9 Steve Carlton of the Philadelphia Phillies won the Cy Young Award and Steve Sax of the Los Angeles Dodgers was Rookie of the Year.