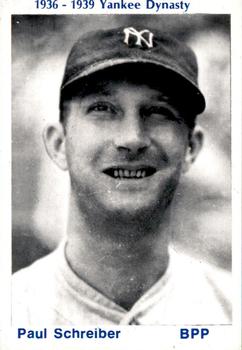 On Tuesday, September 4, 1945, the Detroit Tigers and the New York Yankees met in a pivotal game as part of a seven-game series. The Yankees were coming home after a successful road trip on which they won five of seven at Washington and Philadelphia. The Tigers had just concluded a five-game homestand in which they swept two from Chicago and losing two out of three to Cleveland. The teams began the day with the Tigers leading the American League with a 72-54 record and the Yankees trailing by 4 ½ games in fourth place (behind St. Louis and Washington) with a record of 67-58.

The last time the two teams met was in mid-August at Detroit; the Yankees swept a four-game set. The Tigers’ starting pitcher on September 4, Dizzy Trout, won game three of that series, 15-4. The Yankees’ starting pitcher was Al Gettel who took a 4-1 loss in a May 9 match-up with the Tigers and Trout. Gettel also posted a 3-2 win over the Tigers’ ace Hal Newhouser on May 30 and a more recent 3-2 loss on July 8 against Al Benton.

The game began as a referendum on the wisdom of the July 27 sale of presumptive Yankees ace Hank Borowy to the Cubs for a reported $97,000.1 It would finish as a Cinderella story for Paul Frederick Schreiber. The game was played against the backdrop of the announcement of the “official” end to World War II by President Truman, when he proclaimed September 2, 1945 “V-J Day.”2

A foreshadowing of what was to occur came days earlier with the announcement that the Yankees had activated their 42-year-old batting-practice pitcher, Schreiber, to the active roster as a player. Schreiber had pitched one game in 1922 and nine more in 1923, relying on a fastball, curve, and a knuckleball. “I was getting along fine and one day I tossed a curve and suddenly there was a sharp pain in my shoulder and my arm was too sore to pitch,” he recalled sometime later.3 His major-league career was over then, or so it seemed. Schreiber spent 1924 through 1931 as a minor leaguer winning 60 games and losing 72 to finish his minor-league career with a record of 101-114.4

When Schreiber was activated, manager Joe McCarthy said he believed Schreiber to be “very useful as a relief hurler in the late stages of the pennant race with the Yankees still fighting along as contenders.”5

The Tigers opened the scoring in the top of the second against Gettel via an RBI single from his mound opponent Trout, scoring Jimmy Outlaw, who had singled and stolen second. They added two in the third inning when Eddie Mayo singled and Doc Cramer lined a home run to right field. Hank Greenberg, who had recently returned from his four-year Army stint, did further damage in the fifth inning with a 425-foot home run, after a double by Mayo, his third hit of the game. The Tigers tacked on two more runs in that inning and the rout was on.

By this time, the reported 22,021 fans in attendance clamored for McCarthy to take Gettel out of the game. However, McCarthy left Gettel in to begin the sixth inning. He gave up three more runs, recording two more outs, before exiting for Schreiber.

Schreiber “received an ovation when he entered the game and another, even greater, when he finished” 3 innings of relief.6

Schreiber gave up no runs, no hits, and only two walks succeeding Gettel. Schreiber would pitch again in the final game of the seven-game series, and was roughed up for four hits and two runs in one inning. That was it; Schreiber returned to his batting practice chores. His major-league record stands at 0-0 in 12 games.7

Gettel getting torched in this game may have settled the internal disagreement between McCarthy and Yankees GM Larry MacPhail, that led to McCarthy’s departure in 1946. Gettel was thrust into the starting rotation after the controversial Borowy deal. Gettel had been mentioned cryptically in the past by MacPhail, not by name, as the somebody on the roster who could replace Borowy.8

On July 27, the die was cast, as MacPhail sold Borowy, the Yankees’ most effective pitcher, with a 10-5 record, to the Chicago Cubs. MacPhail termed Borowy a poor second-half pitcher, but Borowy finished 11-2 for the Cubs, who won the National League pennant and faced the Tigers in the 1945 World Series. The Yankees were four games behind the Tigers at the time of the sale, they finished 6 back. 9

MacPhail’s action did not sit well with McCarthy, who had won seven World Series as the Yankees manager. MacPhail dealt away his ace starter in the middle of a pennant race after McCarthy had left the club on July 20 for “health reasons.” McCarthy tried to resign, but MacPhail talked him out of it and McCarthy returned on August 9. Borowy’s half-season stint at Chicago proved McCarthy right and MacPhail wrong. Borowy won three of four games against the St. Louis Cardinals, which was decisive in their finishing ahead of the St. Louis Cardinals by three games. In hindsight, MacPhail had decided both the American and National League races with that single deal, lifting the Cubs, while sinking the Yankees.10

On September 24, 1945, a Journal News of White Plains article titled “Paul Schreiber of Yanks Baseball’s Cinderella Man” compared Schreiber’s appearance that day to “substituting the water boy for an injured halfback.” When Schreiber struck out the first Tigers batter he faced, stopping a four-run rally, he is reported to have chuckled, “I guess you guys will have to call me ‘Mister’ now” as he returned to the dugout. He followed that with three more innings of hitless ball, allowing only two walks.11

A profile of Schreiber in 2015 traced his career from his days as an “affable 6 foot, 2 inch right-hander out of Duval High School in Jacksonville, Florida” who signed his first pro contract in 1920.

In 1938, after his pitching career ended, Schreiber, on the recommendation of Yankees scout Paul Krichell, the Yankees hired Schreiber to pitch batting practice. After his Yankees’ debut, the New York Times wrote of Schreiber, “The Yankee debut of Schreiber after nine years of service exclusively as batting practice pitcher, brought into focus a rubbery armed stalwart who celebrated his . . . first game in organized ball in fourteen years with an impressive exhibition. He left the field with the cheers of the crowd ringing in his ears. He deserved this tribute.12

In addition to the sources cited in the Notes, the author used baseball-reference.com and retrosheet.org for box scores and play-by-play information.

7 W.B. Mead, Baseball Goes to War (Washington, D.C.: Broadcast Interview Source, 1998), 214. Schreiber had previously played for the Brooklyn Robins in 1922-23 under their legendary manager Wilbert Robinson before suffering an arm injury that would end his career. This marked Schreiber’s return to the game as a player after 22 years and 2 days, breaking the record previously held by Charley O’Leary, who returned to the St. Louis Browns in 1934 for a single at-bat after last appearing for the St. Louis Cardinals in 1913.