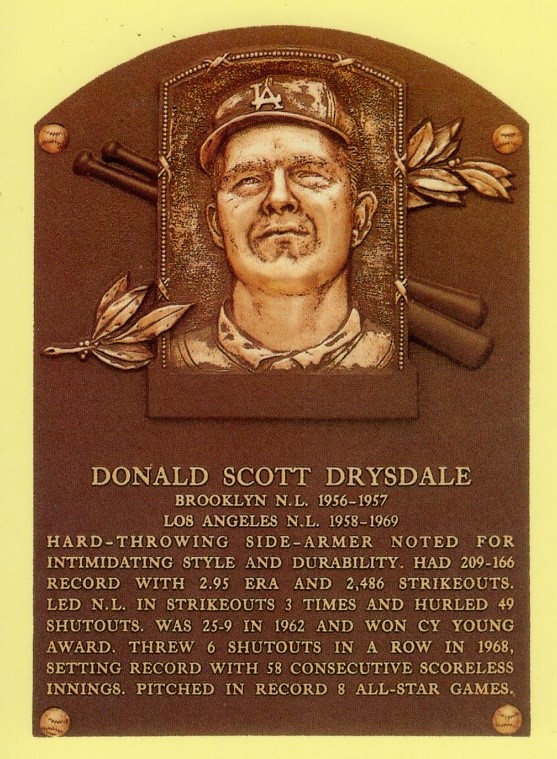 “Sooner or later you have to say, it’s my ball and half the plate is mine. Only I never let on which half of the plate I wanted.” – Don Drysdale1 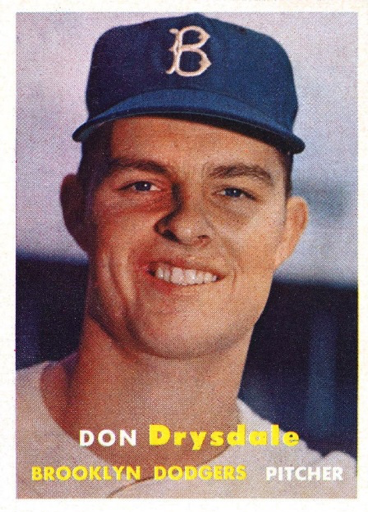 As the calendar turned to September, the heated 1956 National League pennant race had one month to go. The Dodgers found themselves in second place, 2½ games behind the front-running Milwaukee Braves and one game ahead of the Cincinnati Redlegs. They began the month with the challenge of three doubleheaders in three days, a daunting task for any pitching staff, and rookie Don Drysdale was right in the middle of the action for all three days.

On the first day of September, Drysdale opened the doubleheader against the Giants at the Polo Grounds with six credible innings of work. When the Dodgers scored three runs in the top of the seventh inning for a 4-2 lead, Drysdale became the winner thanks to Clem Labine’s 17th save of the season.2 That Labine was pitching again was miraculous. On August 22, he had been struck on his pitching wrist in a game in St. Louis. The plaster cast helping to mend a chipped bone was removed only two days before this appearance.3 In the second game, the two-hit pitching of Sal Maglie and Don Bessent led the Dodgers to a 5-0 win and a sweep.

The Giants returned the Dodgers’ favor by sweeping the doubleheader on September 2. In the nightcap, Drysdale pitched the seventh and eighth innings in relief and retired all six batters he faced. When the Dodgers returned home the next day, Labor Day, to face the Pirates in a doubleheader, Drysdale started the second game after the Dodgers won the first, 4-3. He gave up 10 hits, including five by Bill Virdon, but only two earned runs in eight innings of work, as the Dodgers lost, 3-2.

The Dodgers had managed to split the six games in three consecutive doubleheaders but now were tied with the Redlegs in second place, 3½ games behind the front-running Braves. As Louis Effrat put it in that morning’s New York Times, “Many are the pitfalls along the road to a pennant. …”4 The heat of the pennant race was about to increase.

Less than a week later, Drysdale (4-5, 2.89 ERA) took the mound on a Sunday afternoon at Ebbets Field against the New York Giants. The Braves had lost five games in a row and the Dodgers trailed them by a half-game.

Max Surkont (2-1, 5.58 ERA) started for the Giants, having been purchased from the Boston Red Sox because of numerous injuries on the Giants’ pitching staff.5 In this season, he had already pitched for the Pittsburgh Pirates, the St. Louis Cardinals, and the San Francisco Seals of the Pacific Coast League, a Red Sox affiliate. He was the losing pitcher in the second game of Brooklyn’s doubleheader sweep on September 1.

The Giants took the early lead against Drysdale and the Dodgers. With two outs in the first inning, Willie Mays hit his 30th home run of the season into the left-field stands for a 1-0 lead. It would be the only run of the day against Drysdale.

When Mays came to bat in the fourth inning, Drysdale delivered two knockdown pitches before Mays lined a one-out single to right.6 Payback for the homer in the first inning? Mays proceeded to steal second base, his 34th of the season, on the very next pitch. Frankie Frisch with 49 steals in 1921 was the only Giant to have stolen more bases.7 No problem for Drysdale. He retired the side without letting the ball out of the infield.

In the first three innings against Surkont, the Dodgers could muster only an infield single by Duke Snider and a walk to Jim Gilliam. But the game turned quickly in the fourth. When the Dodgers came to bat that inning, it was Surkont who helped their cause. Nothing draws the ire of a manager more than when his pitcher issues one too many walks. Surkont walked Snider and Sandy Amorós and with one out, Carl Furillo lined his 19th home run of the season into the left-field stands.

The Dodgers led 3-1 and Drysdale was in complete control. The Giants got their third and final hit of the game in the fifth inning. With two outs, Daryl Spencer dropped a bunt single toward third base, but Surkont grounded out to third to end the inning.

Drysdale was the first batter in the Dodgers fifth and now it was Surkont’s turn. His first pitch was “high and tight.” To New York Times sportswriter Roscoe McGowen, the intent was clear. “This, no doubt, was a retaliation for two knockdown deliveries from Don to Mays in the fourth inning.”8 On the very next pitch, Drysdale hit his first major-league home run, into the left-field stands. When the next batter, Jim Gilliam, doubled, Giants rookie manager Bill Rigney replaced Surkont with Rubén Gómez. Pee Wee Reese sacrificed Gilliam to third, from where he scored on Snider’s fly ball to center, and the Dodgers led 5-1.

Drysdale’s only flaw in the last four innings was a two-out, full-count walk to Dusty Rhodes in the eighth inning. The Dodgers scored their last run in the eighth inning. Steve Ridzik was now on the mound for the Giants, opening the frame by walking Jackie Robinson. Amorós sacrificed Robinson to second before Furillo singled to right center for his fourth run batted in of the game.

The complete-game three-hitter was Drysdale’s fifth win of the season and his fourth against the Giants. It was clear that he understood the rivalry in New York and he relished it. Years later he wrote, “If you didn’t get up for that, you weren’t awake, and it’s been three decades since I experienced the Dodgers-Giants rivalry in New York, and I still haven’t seen anything vaguely resembling it – anywhere, anytime – in professional sports.”9

Drysdale pitched only twice more in the regular season and both were short relief assignments in losing causes. He watched as his teacher, 39-year-old Sal Maglie, turned back the clock to his prime and won six of seven starts in September, including a no-hitter against the Philadelphia Phillies during the last week of the regular season. When Marv Blaylock grounded out to end that game, the celebration began. “Campy and young Drysdale carried the Barber off the field to the clubhouse.”10 The New York Times photo captures the moment, pupil carrying teacher.11 Its short bio of Maglie also noted that his typically reserved and quiet style on the field had been abandoned this year to provide pitching tips to young Dodgers hurlers, Drysdale and Sandy Koufax among them.12

In the World Series, won by the Yankees in six games, Drysdale pitched only once, in relief. In Game Four, he pitched the seventh and eighth innings, yielding a two-run home run to Hank Bauer, and the Yankees won 6-2.

But Drysdale’s time would come. The transplanted Dodgers won the World Series in 1959, 1963, and 1965. On each occasion, Drysdale’s pitching was a significant contributor to that success. Perhaps no game speaks louder than the third game of the 1963 World Series against the Yankees. Drysdale was masterful, striking out nine and yielding only three singles in a 1-0 complete-game victory.13 With the dominant pitching of Drysdale, Koufax, and Johnny Podres, the Dodgers swept the Yankees in four!

Drysdale’s plaque at the National Baseball Hall of Fame begins, “Hard-throwing side-armer. Noted for intimidating style and durability.”14 Dave Anderson described Drysdale’s style of pitching with dimensions, “Home plate is 17 inches wide. But to Don Drysdale it is divided into three parts – the inside four inches, the middle nine inches and the outside four inches. To him only the middle part belongs to the hitter; the inside and outside parts belong to the pitcher.”15

The illustrated Hall of Fame plaque gives us the numbers behind the story that all started in Brooklyn in 1956.

A SABR Baseball Games Project essay is a research paper with a story. The story of Don Drysdale’s rookie season in the major leagues is told in two essays. See the first story: April 23, 1956: Don Drysdale beats Phillies in first major-league start.

The author accessed Baseball-Reference.com for box scores/play-by-play information (baseball-reference.com/boxes/BRO/BRO195609090.shtml) and other data, as well as Retrosheet.org (retrosheet.org/boxesetc/1956/B09090BRO1956.htm). The Don Drysdale baseball card is from the 1957 Topps series (#18) obtained from the Trading Card Database. The illustrated postcard was purchased from the National Baseball Hall of Fame and Museum.