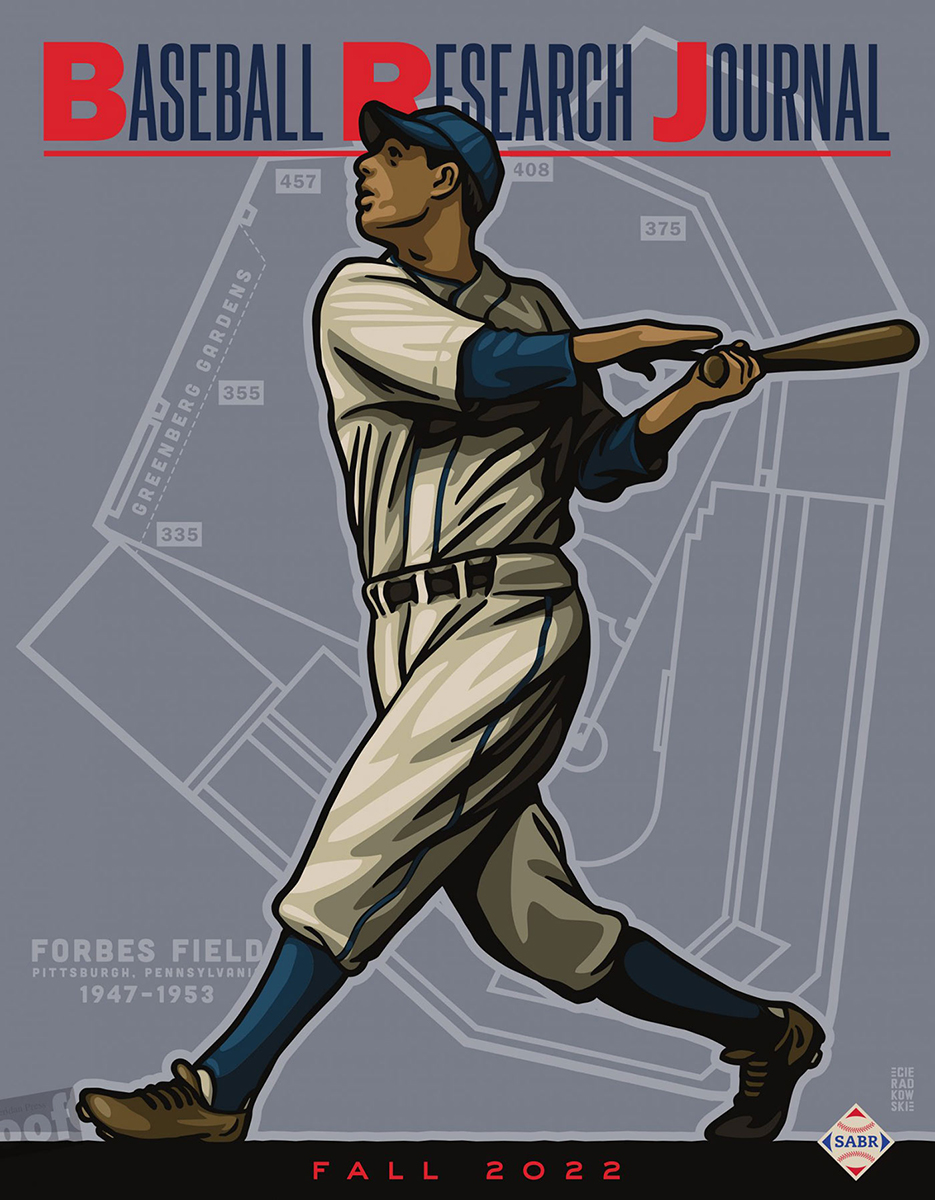 When I started putting this issue of the Baseball Research Journal together, I did what I usually do: I looked at the articles coming out of peer review and started grouping them by common themes. One that emerged right away was change. But I began to realize that nearly every article this time around fit that theme! One article was about how Forbes Field changed its dimensions hoping to benefit Hank Greenberg, another was about how racial integration changed the action on the field. One was about a rule change in the nineteenth century, another was about a rule change in the twenty-first. How about league expansion in the nineteenth and twentieth centuries? For a pastime so supposedly steeped in tradition and with such an unchanging character, baseball has been through massive changes, and the change has been constant.

I wrote an article for the 2021 issue of The National Pastime about various rules changes coming to the game under Rob Manfred’s watch, some sooner than others.1 In 2023 we’ll see several, including the banning of the extreme infield shift and the introduction of a pitch clock—plus larger bases and a limit on the number of pickoff attempts that can be made. Prognosticators expect that batting averages will rise and that the running game is going to explode. But might there be unforeseen outcomes and unintended consequences? Of course there will, and I’m eager to see how it turns out.

What I’m not eager to see is baseball eventually lose its charm. Some would say it already has, but another thing we know from baseball history is that complaints that the sport is less interesting or worse than it was before are as old as baseball itself. An interesting tension exists between the teams that play the game and the management of the sport itself. The teams have one main job: win ballgames. If their style of play is boring, so what? As long as they get a W at the end of the day. Maintaining the longterm health of the sport isn’t on their agenda. The front office does try to put fannies in the seats (and eyeballs on the screen) in order to make money. In their view, if they’re getting enough revenue from fan engagement of whatever kind, dollars are their ultimate measure. That leaves the commissioners’ office, then, as the only entity tasked with maintaining the long view.

I don’t envy them this task. Why do people become baseball fans? How do you ensure the next generation has the same or more chances to become fans as the previous one? Which changes in demographics that we see are going to become generational and which are just typical functions of age groups? How much of the appeal of baseball is sociological, and how much is aesthetics, and can either one be quantified?

The closest analog I can think of for Major League Baseball is Walt Disney World. Disney has this dilemma: it has to evoke a reliable sense of nostalgia for people returning to the park while still keeping up with the times and offering new and exciting experiences. If the Disney theme parks never changed, they’d die out, so they have to change, but they have to change in such a way that they don’t damage the nostalgia nor break the unspoken contract with the park-goer that the experience will be magical. It has to feel the same, even though it’s different. MLB has this same nostalgia dilemma: you want people to root for their team even though the players are different from year to year, and you want fans to love the game for their whole lives, even though they’re different people when they’re ten years old as when they’re seventy.

The history and hearkening back to America’s past is part of the cachet of baseball, but the product on the field is now demonstrably different than it was a hundred years ago. If you go decade by decade maybe baseball in 1940 wasn’t that different from 1930, 1980 wasn’t that different from 1970, and so on, but baseball in 2019 was so different from 1919 that we had more strikeouts than hits on the season for the first time. There’s less running around and more home runs. I can’t say that I, personally, mind all the waiting for the home runs. It makes baseball much more like a samurai duel than a boxing match: there’s much less action but when the action does happen, it’s decisive. I am, however, definitely not the “typical fan.”

The danger for MLB is that if they make too many changes, they could lose the fans they have while perhaps not attracting new ones, either. But philosophically speaking, if the new rules are going to make the game “more like it used to be” while at the same time increasing the amount of action and excitement, really, isn’t that win-win? How could it go wrong?

Well, I’m sure the papers hitting my desk this time next year will tell me.

1. Cecilia Tan, “The Rules, They Are A’Changin’,” The National Pastime: The Future According to Baseball, (Phoenix: SABR, 2021).