This article was written by Peter Morris - John Thorn 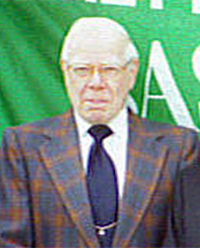 Bob McConnell (1925–2012) was an original SABR member from 1971 and a star researcher in whatever field to which his interest turned. His expertise was on brilliant and thorough display in biographical research, nineteenth century baseball, and perhaps most notably, the minor leagues. He revamped the John Tattersall Home Run Log, purchased by SABR from the latter’s estate in 1981, and kept it up to date until its publication in 1996 as SABR Presents The Home Run Encyclopedia, a register of every home run ever hit in major-league play. But perhaps McConnell’s greatest legacy is the three-volume Minor League Stars, which celebrated not only the anecdotes surrounding those second-tier greats, but also documented their statistical records accurately for the first time. Along with Ray Nemec, Vern Luse, and Bob Davids, McConnell brought to life the golden age of the minor leagues, when many top-rank players preferred to stay closer to home, making salaries greater than they had made in their brief stays in the majors.

Robert C. McConnell was born on January 18, 1925, in Seattle, the son of a sea captain and a former World War I nurse. The family moved frequently while he was young, and portions of Bob’s childhood were spent in Oregon, New Mexico, California, Massachusetts, and New York City before the family finally settled in Newark, New Jersey, in 1935. One of the constants in each new location was a love of baseball, which proved a good way of making new friends. When Bob arrived in Newark, he soon became an avid fan of the local Newark Bears, one of the legendary minor league franchises.

In 1939, the ESSO Gas Company issued a fifty-page booklet to commemorate the supposed centennial of baseball and handed it out at gas stations. Among the nuggets in the booklet was a list of every major leaguer who had hit at least 100 career home runs. Fatefully, one of the youngsters who picked up a copy was 14-year-old Bob McConnell, and his new acquisition proved to be a windfall for baseball research. He was especially intrigued by the listing of batters with 100 lifetime home runs, which included only fifty-one names. He started meticulously updating it about once a week. The pages of the booklet soon became well-worn, and a lifelong passion had begun.

A world war, however, soon intervened. Bob joined the Navy for a minority hitch in 1942. (A minority hitch committed 17-year-olds to serve in the regular Navy until their twenty-first birthdays.) He spent the next three years on two ships: the U.S.S. Whitman, a destroyer, and the U.S.S. Mifflin, an attack transport.

In July 1945, Bob was selected for officer training and was sent to Vanderbilt University. He was discharged from the Navy in January 1946, but continued at Vanderbilt under the Serviceman’s Readjustment Act of 1944 (the “G.I. Bill”) after the end of the war. He graduated in 1949 with a Bachelor of Science degree in mechanical engineering. Later that year, he married Mildred “Millie” Cooper. Like Bob’s mother, Millie was a native of Nova Scotia, and he met his future wife during one of his family’s annual vacations there.

Bob was hired straight out of college to work as a start-up service engineer for Combustion Engineering. The job involved the construction of new power plants, so as soon as one job was done, he was on to a new location. Over the next four years, he was traveling all the time, never spending more than a few months in one spot. Millie gave birth to the couple’s first son in 1952 while they were living in a house trailer.

It was time to seek a more stable lifestyle, and Bob and Millie talked over where they’d like to raise their family. Both agreed that of all the places Bob had worked, the stint they had most enjoyed was one in Wilmington, Delaware. So Bob put in an application with the Delmarva Power & Light Company in Wilmington, and was hired as a power plant engineer on April 1, 1953. It proved the perfect fit, and Bob remained in the position until his retirement in 1983 on the 30th anniversary of his hiring.

Bob and Millie completed their family with the birth of their second son, and work and parenthood kept them busy in the years to come. But gradually they began to find time for other interests. Millie became an expert bridge player and is now  a Life Master. Bob, meanwhile, began to reignite his old passion for baseball. In particular, with the minor leagues then struggling, he became fascinated with commemorating the heroics of the stars of the glory days of the minor leagues. The statistical records of many players were shockingly incomplete, and Bob began the painstaking work of filling in the gaps. He started making trips to the Library of Congress and using interlibrary loan to track down old box scores.

He got additional help from the fortuitous discovery of two articles in The Sporting News. One of them was a piece written by a Washington, D.C., resident named Bob Davids who displayed a similar interest in tracking home run feats. Intrigued, McConnell looked up Davids in the Washington phone book and sent him a letter. Davids responded and informed McConnell of several other kindred spirits, including Cliff Kachline and Ray Nemec. Before long, Bob McConnell had several new correspondents with similar interests.

The other article put him in touch with a researcher named John Tattersall, who was the owner of the kind of collection that every SABR member dreams of discovering. Years earlier, a Boston newspaper merger had led to the disposal of much of the morgues of one of those papers. Among its contents was an extraordinary collection of box scores and game accounts dating back to the 1876 formation of the National League. Tattersall happened to be living in Boston at the time and purchased the collection for a song. He then began meticulously going through this gold mine and using it to fill in the massive gaps that still existed in major league baseball’s statistical records. Imagine Bob’s excitement when he learned of the existence of this precious resource—and that its owner now lived in nearby Philadelphia.

Needless to say, the two men became close collaborators in the ensuing years. On any spare weekend McConnell could be found at the Wilmington library, poring over the goodies that had arrived as a result of his interlibrary loan requests. Once a month he would travel to Philadelphia. But box scores from Saturday games all too often remained elusive, so he made two trips a year to the Library of Congress, which had many late editions.

In the years that followed, Bob McConnell continued to slowly but surely expand his network of baseball research colleagues, including historians Ernie Lanigan and Lee Allen at the National Baseball Hall of Fame in Cooperstown. But doing baseball research remained a slow and tedious endeavor, especially for a man with a demanding job and a growing family. Reliable published resources were still scarce, so a voluminous correspondence was often needed just to try to fill in the many gaps in the early encyclopedias. Bob became an indefatigable letter-writer, and he had two file drawers full of baseball correspondence.

By the 1950s, he was regularly writing to ballplayers to sort out the many anomalies that were emerging. Sometimes these produced exciting discoveries, such as when Bob received a letter from George Winkelman — a player from 1886 — in which Winkelman verified that he pitched with his left hand. Collaborations with fellow researchers were also generally carried on by means of the post office. That finally began to change in 1971 when Bob Davids floated the novel proposal of an organization for all of the people doing baseball research. When he got enough positive replies, he arranged for a meeting in Cooperstown on August 10, 1971.

Sixteen researchers ended up attending the meeting and forming the Society for American Baseball Research (SABR). Davids was selected as the president and McConnell became its first secretary and treasurer. Like the founders of any new organization, they had grandiose dreams of great growth. McConnell said with a chuckle, “We talked with excitement about how one day we might have as many as fifty members!” It is safe to say that SABR has exceeded their wildest dreams, as it now boasts well over 6,000 members.

Through all of SABR’s growth, one constant was Bob McConnell, who attended all but one of the 41 annual conventions held during his lifetime. (Asked about the one he missed, McConnell grimaced before replying, “That was one of the biggest mistakes I ever made. I had some business come up and I don’t know why but I let it get in the way.”) McConnell served as a board member for an additional 11 years during SABR’s formative period, and was an active participant in pretty much everything SABR undertook. The rapid expansion of the membership enabled researchers to specialize in the areas that interested them most. McConnell turned his attention to two interests that dated back to his youthful days of rooting for the great sluggers of the 1930s and for his hometown Newark Bears.

The first of these was home runs. One of John Tattersall’s most ambitious projects was the creation of a log that would detail every major-league home run ever hit. McConnell was a key ally on this initiative, filling in many of the gaps in the records. When Tattersall died in 1981, SABR purchased his collection, and McConnell was put in charge of the home run register, which was rechristened the “Tattersall-McConnell Home Run Log.” McConnell insisted that it was Tattersall who “should be credited with the bulk of the work.” The results were published by Macmillan in the 1996 book SABR Presents The Home Run Encyclopedia. The SABR Home Run Log, later maintained by the late David Vincent, is available for everyone to view at Baseball-Reference.com. (Go to any player’s page and click the tab that says “HR Log” to access the data.)

McConnell’s second research passion also came out of the many afternoons he spent watching the greats of the International League. Along with Ray Nemec, Vern Luse, and Bob Davids, he became one of the principals in another ambitious effort that aimed to create complete statistical records for the greatest minor league players. The project proved so successful that SABR eventually published three volumes of the Minor League Stars series, along the way directing new attention to “Buzz” Arlett and the other luminaries of the golden age of the minors.

Today’s researchers take for granted the completeness of the statistical record that is now available at the click of a mouse. But we need to recognize that we have that vantage point because we stand on the shoulders of giants like Bob McConnell who put in countless hours of work to make that possible.

Life has a funny way of bringing things full circle. Bob and Millie McConnell had three grandchildren and one of them worked for Exxon — that’s right, the company that released the fateful commemorative home run booklet back when it was known as ESSO. Oh, and in case you were wondering about that home run booklet, it disappeared along with his baseball cards while he was serving in the Navy. But it hasn’t been forgotten either. Some years ago, Bob purchased an original booklet from a dealer and had it bound. It occupied a prominent place in his home.

Conversations and correspondence with Bob McConnell, Bill Deane, and members of SABR.