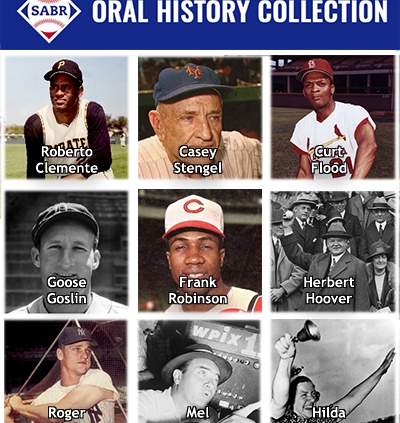 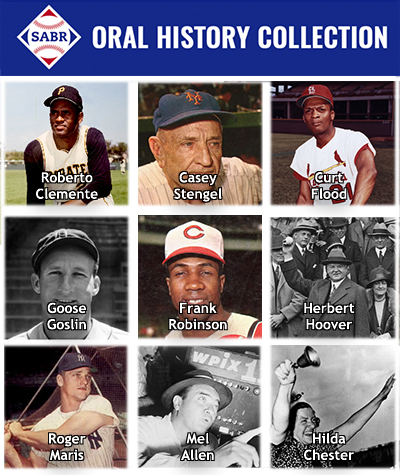 MAY 17, 2022 — An invaluable collection of more than 50 audio interviews of baseball players and figures from the 1960s conducted by radio and TV executive Clifford Evans has been added to the SABR Oral History Collection.

Evans, a longtime executive with RKO radio, traveled to spring training in Florida each year during the early 1960s and conducted dozens of interviews with baseball players and managers who were preparing for the upcoming season. The broadcast-quality interviews, typically about 5 to 10 minutes in duration, were acquired, digitized from reel-to-reel tapes, and donated by Gregory L. Peterson, a SABR member and attorney from New York.

Other interviews are from Old-Timers’ Day at Yankee Stadium on August 13, 1960, including Tommy Bridges, Bobo Newsom, and former US President Herbert Hoover. Fresh off hitting a record 61 home runs in 1961, Roger Maris is interviewed about the Yankees’ upcoming season. Young St. Louis Cardinals prospects Curt Flood and future NL president Bill White are also interviewed before the 1962 season opener.

The Society for American Baseball Research (SABR) is a nonprofit organization dedicated to fostering research and disseminating the history and record of baseball. Founded in 1971, SABR has more than 7,000 members worldwide and has established itself as a vibrant baseball community and a premier distributor of ground-breaking baseball information. SABR features 80+ chapters and 30+ research committees, and produces three annual publications — two editions of The Baseball Research Journal and The National Pastime — in addition to other print and e-books. SABR also hosts annual events, including the National Convention each summer, and the SABR Analytics Conference in March in Phoenix.