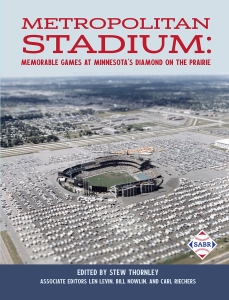 The Met followed the trend of other post-war stadiums, sprouting in open areas that were well-served by highways and surrounded by plenty of parking. It became apparent to Minneapolis business and civic leaders that a new stadium would be needed to join the other cities luring major-league baseball to their areas. By the time the Met opened in 1956, the first wave of shifting teams had passed, and Minnesota was snubbed by the New York Giants. The parent team of the minor-league Minneapolis Millers — the stadium’s first tenant — the Giants bypassed Minnesota by switching coasts completely. Eventually, expansion came to the majors and with it the relocation of the Washington Senators, rechristened the Twins.

Ultimately, Met Stadium served the Millers for five years and the Minnesota Twins for 21. In this book, 45 different authors chronicle the significant, memorable, and unusual games that took place in a ballpark that grew out of a cornfield in a southern suburb of Minneapolis. Outdoor baseball in Minnesota often meant postponements and delays because of rain, snow, and even a tornado. (A list of postponements of games for the Millers and Twins is one of the features in this book.) But delays were caused by other reasons, including a bomb threat and a drunk fan climbing the foul pole, and those games are also covered in these pages, as well as memorable performances on the field from players such as Jim Kaat, Harmon Killebrew, Rod Carew, and Bert Blyleven, as well as Cesar Tovar, Camilo Pascual, Tony Oliva, Bob Allison and many more.